The Occupy movement did us all one big favor: It brought income inequality into the public debate. After close to 40 years of gradual income and wealth erosion, North America's middle and working classes now understand that they've been had. 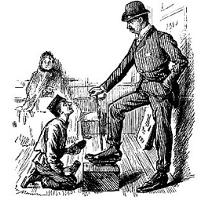 While most of us were trying to make a living and a life, a very small number of well-tailored pickpockets were pilfering much of what we made. Then they had the chutzpah to blame us for not succeeding the way our parents and grandparents had, in the 30-year golden age after the Second World War.

Most of the debate in the past year has been in the U.S., where the 99 per cent have begun to suspect they'll never make it into the one per cent after all. The debate has been quieter in Canada, where programs like medicare have helped to keep the income gap a bit narrower. But it's still a gap, and it's getting worse.

The Broadbent Institute, an Ottawa think tank, recently released its own study of the problem. Towards a More Equal Canada sets out the situation in just 26 well-documented pages. Based in part on an extensive poll, the report has some findings rarely mentioned in political debate.

The report finds that from 1982 to 2004, the bottom 60 per cent of Canadian families saw no increase in their incomes: "Over that period of more than 20 years, the income of a family in the exact middle of the income range rose from $42,000 to $43,000 (measured in 2004 purchasing power). ... Almost all of the income gains during that period went to the wealthiest 20 per cent of Canadian families, with much of that going to the top one per cent."

The top one per cent now receive 14 per cent of all income in Canada. That's less than the 18 per cent received by the American one per cent, but decidedly better than Sweden's 7.1 per cent.

Forty per cent of us are under water

Income inequality is matched by wealth inequality: In 2005, 10 per cent of Canadian households owned 58.2 per cent of the nation's wealth. The bottom 40 per cent, the report says, have almost no net wealth at all; their debts are greater than their incomes.

Whether or not Canadians know these precise numbers, they're aware that something has gone very wrong. And despite endless media campaigns about the horrors of taxation, the report finds we know what to do about the problem of inequality:

• Over three out of four Canadians (77 per cent) see inequality as a "serious problem."

• Seventy-three per cent of us support increasing corporate tax rates.

• And 83 per cent of us support higher taxes for the richest Canadians.

After analyzing both causes and effects of this stagnation, the report proposes improving matters by creating good jobs, improving income supports such as employment insurance and the Canada Pension Plan, expanding public services, and making taxes fairer.

This would not just make poorer families more secure, the report argues. "There is certainly scope to improve income support programs and public services by shifting resources from areas like military and criminal justice spending, and many social investments will lower government costs and have a long-term payoff. ... The social ills created by inequality -- ill health and premature mortality, high crime rates, and more -- are enormously expensive for governments. Greater equality can help underpin better economic performance."

The Tyee went to Ed Broadbent for a fuller explanation, which he was happy to provide.

On why the report was issued now:

"Now? It's obvious. Very orthodox institutions like the Conference Board of Canada, relying on an OECD report, see that inequality is a problem. Lots of academics are aware of the problem. For me, the core value of social democracy is that society should be more and more equal. You ought to have the opportunity to develop your abilities. But Canada is becoming more and more unequal."

On what he himself sees of the impact of inequality in Canada today:

"I see it all over. There are very poor people in Ottawa, begging for money. When I was a young man, beggars were nonexistent. The great majority of Canadians haven't seen any improvement in 20 years. They're pressed by increasing fees for college. Most companies don't provide a pension plan. I run into people here on the street in Ottawa who bring this up.

"Fifty per cent of growth has gone to the top one per cent. But the Liberals and Conservatives used to tax the rich to provide services."

On arguments about "redistributing income" to create equality:

"We all have market-based economies, but progressive governments in western Europe have intervened, recognizing that the richest should pay more in taxes. The rich pay their fair share."

On how the federal parties are dealing with inequality:

"The NDP is no doubt working on becoming government. I hope our party will do something. The Ontario NDP got a new tax on the richest people in exchange for supporting the minority Liberals. I hope this report will get wide distribution and increase the influence of ordinary people on politicians."

On how quickly things could turn around:

"I'd like to see a strategic plan. We can't change overnight after 20 years. We could take a series of measures; B.C., for example, has an affordable housing problem. The Trudeau government brought in a mix of public and private measures for such problems, but it took time. A hike in the minimum wage would help. Currently the federal government sets its wages on provincial levels, instead of setting its own levels. We also see the evidence of other advanced countries: more equality means a more productive economy. Germany, Sweden and Norway all have productivity levels equal to ours or higher."

On the least understood aspect of inequality:

"Inequality is bad for everyone, including the rich. Americans in the top three per cent have health outcomes worse than those in Sweden and the Netherlands. Such negative effects on the whole society aren't understood. With equality, everyone does better. Also, a more equal society benefits middle-class Canadians -- stronger pensions, lower crime rates, fewer teen pregnancies, and so on. The evidence shows the U.S. is way down in social mobility. The poor in equal societies have better chances than they do in the U.S."