Before I get started, please understand that I mean no disrespect whatsoever to those who died on 9-11, nor their families and friends -- that I mean from the bottom of my heart. 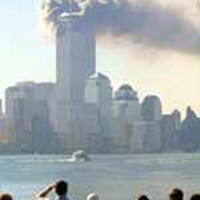 I am sick of 9-11. I'm sick of hearing "God Bless America" instead of "Take Me Out to the Ballgame" for the seventh inning stretch. I'm tired of seeing and even thinking about George Bush. (As we settled in to enjoy the World Series, my wife Wendy was so pissed off at seeing Bush in the owner's box, she changed her allegiance from the Rangers to the Cards!)

I'm tired of excessive airport security. I love those questions about who packed your suitcase. Are they expecting a terrorist to say, "No, my Al Qaeda buddy did and it's full of explosives?"

Right after 9-11, a local professor said that Americans had created hardships in the world that had motivated the attack. Like most in the media, I dumped all over her. Now, however, it's pretty obvious that she was right -- her timing, however, was awful.

As Chief Dan George advised, it's wise to walk a mile in another man's moccasins, and I suggest we look at this through Islamic eyes and see if we can learn something of what caused this tragedy.

Vietnam is not a bad place to start because, like the Middle East, it had suffered the indignity of European occupation. In Vietnam, the Americans had no issue at stake to use as a reason for being there exception their 235 year old doctrine of "manifest destiny" that said every place in the world must have American democracy. Considering the gang they supported in Saigon, this was pretty hard to stomach. The plain fact was that to the Vietnamese, the U.S. was just a newer version of France.

The distinction between Vietnam and the Middle East is that in the latter, there is long religious and cultural battle going back to the Crusades. You might remember the fuss when Bush the First talked about a "crusade" running up to Iraq war number two.*

How to create generations of resentment

The modern lousy relationship between Europeans and Muslims became a matter of holy writ after the Balfour Declaration in 1917 started the movement of Jews into Palestine, leading to the creation of Israel in 1948, an event which Arabs bitterly resent to this day.

Let's pause here for a moment and examine this declaration, for there is a line which seemed forgotten before the ink dried on the manuscript, namely that nothing shall be done which may prejudice the civil and religious rights of existing non-Jewish communities in Palestine.

Is it any wonder why the taking of Palestine and making much of it into a Jewish homeland made the inhabitants cross?

After the First World War, the Ottoman Empire, which controlled the majority of Arab land, crumbled.* Britain and France, more the former than the latter, offered to make everything better by creating a number of nations, none of which, excepting Egypt, had any sense of nationalism. They had common language and common religion, yes, but they were not otherwise nations. The British simply drew lines in the sand, created kingdoms, and like Little Jack Horner, looked content while no one in the new "nations" involved did.

Then there's oil. For the chapter and verse history, one should read Linda McQuaig's It's The Crude, Dude. Allow me to roughly summarize.

Just before the First World War, First Lord of the Admiralty, Winston Churchill, decided to replace the coal burning Royal Navy with oil which soon became, and still is, the "economic" issue that has plagued the region ever since. The oil in the Middle East, which was abundant, became the issue used by the U.K., and U.S. to interfere in Middle East countries. One example stands out -- Persia (now Iran), which had an abundance of what the unwelcome visitors courted, then critical to their economies.

In 1951, Iranians democratically elected Mohammed Mosaddegh, who became prime minister of Iran. This quote from Wikipedia tells his story: "From an aristocratic background, Mosaddegh was an author, administrator, lawyer, prominent parliamentarian, and politician. During his time as prime minister, a wide range of progressive social reforms were carried out. Unemployment compensation was introduced, factory owners were ordered to pay benefits to sick and injured workers, and peasants were freed from forced labor in their landlords' estates. Twenty per cent of the money landlords received in rent was placed in a fund to pay for development projects such as public baths, rural housing, and pest control."

Mosaddegh, by 1953, had been demonized by the U.K. because he had the temerity to nationalize oil. For his trouble, he was overthrown by the U.K. and the CIA (led by Teddy Roosevelt's son Kermit) who installed the Shah as an absolute monarchy. Space requires that I leave unsaid a hell of a lot more examples of intervention in the Middle East by the U.K., the U.S., and to a lesser degree France.

What if one looks at this as if it were Arabs interfering with the European countries? There would be war.

Here's where Muslims kidnapping, bombing ships and buildings, and carrying out the 9-11 attacks come in.

Arabs and Iranians see themselves as wronged and seek to fight -- except they can't. The U.S. is too powerful to meet head on. Arab and Iranian forces are no match for the U.S.

Frustration inspires innovative ways to retaliate. It's the old story. If all you have is a hammer, all you seek are nails.

A decade can shift perspective

I was as horrified as most people at 9-11. In fact, I asked our priest to have the "Battle Hymn of the Republic" as one of the following week's hymns. He agreed and there was scarcely a dry eye in the congregation.

But time begets fresher perspectives. And although I'm still horrified with that terrible morning, I've become more reflective and analytical in the days since.

No bombing of innocent people can be excused, be it Guernica, London, Dresden, Hiroshima or New York and Washington. But until humankind learns how to, in Lyndon Johnson's words "reason together," we will have the horrors of war and deaths of the innocent.

When you look at 9-11 or any bombed city, one can see that while there is never a good reason, there is an explanation.

Even the U.S. -- no, particularly U.S. citizens -- must expiate its own sins when evaluating those of others.