Eighteen months ago, on May 12, 2009, more than 25,500 residents of Oak Bay-Gordon Head trudged to the polls and cast their ballots in British Columbia's 39th general election. 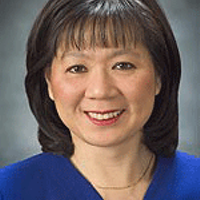 Starting either later this week, or early next (once B.C.'s chief electoral officer has approved an application submitted yesterday by former premier Bill Vander Zalm's anti-Harmonized Sales Tax campaign), about 60 per cent of that number -- 15,366, to be precise -- of Oak Bay's denizens will have nearly two months to sign a petition intended to force the dismissal of the riding's MLA, Ida Chong.

It's a daunting task. Since B.C.'s recall legislation was enacted in 1994, 19 of 20 attempts to remove a sitting MLA have failed to collect the required number of signatures.

Yet, for several reasons, Oak Bay-Gordon Head looks to be the ideal riding for the anti-HST forces to launch their initiative to recall BC Liberal MLAs. The odds for success are probably much shorter than is believed by many pundits.

More NDP friendly than before

Those who closely follow B.C. politics know that the entire Greater Victoria-Lower Island region has been trending strongly towards the NDP -- and away from "free-enterprise" parties -- over the last 40 years. That trend is especially evident in Oak Bay.

In 1963, the reconstructed New Democratic Party -- known as the Co-operative Commonwealth Federation, or CCF, from 1933 to 1961 -- fought its first general election in B.C. The new party got 27.8 per cent of the province-wide vote, but took just 18.5 per cent in Greater Victoria. The NDP fared even worse in Oak Bay, capturing a miserable 4.5 per cent.

Anscomb lost his seat to Philip Gibbs, a Liberal, in 1952 -- the year that Bennett led the upstart Social Credit party to power. Gibbs represented the district for the next eight years, and was succeeded by another Grit, Alan Macfarlane, in 1960. Macfarlane also held the seat for eight years before resigning in 1968 to sit on the B.C. supreme court.

The riding returned to the Conservatives when Scott Wallace, a family physician, topped the polls in the 1969 general election. The popular Wallace won re-election in 1972 and 1975, but quit politics in 1978. Tory Vic Stephens held the seat in the subsequent by-election.

The riding was renamed Oak Bay-Gordon Head in advance of the 1979 general election, which Stephens lost to lawyer Brian Smith, the mayor of Oak Bay and an ex-Tory-turned-Socred.

Smith served as education minister and attorney general in the cabinets of Social Credit premier Bill Bennett, and continued in the latter post under Bennett's Socred successor, Bill Vander Zalm. But he quit cabinet in 1988 after publicly questioning Vander Zalm's leadership and resigned his seat the following year.

Historically, Oak Bay had offered scant support for the New Democratic Party. Even in 1972, when Dave Barrett led the NDP to its first-ever victory in B.C., the party's Oak Bay candidate was backed by just 7.2 per cent of local voters.

It was not until the 1978 by-election that the New Democrats, with 19.5 per cent, broke convincingly into double-digit territory, and that was followed by an even-better 26.2 per cent in the 1979 general contest. The upward climb continued. In the 1989 by-election NDP newcomer Elizabeth Cull soared to 45.3 per cent, good enough to prevail by 377 votes over Susan Brice, the popular Oak Bay mayor who ran under the Socred banner. It was the New Democrats' first-ever win in the riding.

Eight years later, in 1972, the New Democrats under Dave Barrett garnered 39.6 per cent of B.C.'s popular vote and won their first-ever general election victory. They still trailed in Greater Victoria, however, taking a mere 21.3 per cent, and in Oak Bay the NDP candidate got a bare 7.2 per cent.

It took nearly two decades for the NDP to record their second provincial electoral victory, and in the interim the party's Lower-Island support increased dramatically.

Mike Harcourt's New Democrats won 40.7 per cent of the province-wide vote in 1991, a slight (1.1 per cent) increase over the 1972 result. But in Greater Victoria the New Democrats more than doubled their vote-share, skyrocketing to a whopping 45.4 per cent.

In B.C.'s last general election, in 2009, the NDP under Carole James took 42.2 per cent of the province-wide vote. In Greater Victoria, the comparable figure was a stunning 51.1 per cent, and in Oak Bay-Gordon Head the result was a general-election record-high of 44.3 per cent.

Lots of boots on the ground

To repeat, the Oak Bay-Gordon Head constituency, like the Greater Victoria region as a whole, has been trending towards the New Democratic Party for the last four decades. And it shows no sign of stopping.

Insofar as the recall campaign against Ida Chong is concerned, the region-wide swing towards the NDP means that anti-HST organizers will have plenty of foot-soldiers to conduct an on-going canvass to obtain petition signatures from Oak Bay residents. Indeed, Vander Zalm claims that he has an army of 600-plus volunteers -- compared to an average of about 100 in each of the previous 20 recall campaigns. (Four recall efforts had no volunteers.)

Oak Bay's growing tilt towards the New Democrats also means that the recall campaign does not have to conduct canvasses on a riding-wide basis, but can focus their efforts on those neighbourhoods and polls that have a concentration of NDP (or non-BC Liberal) voters, and then move slowly into those areas that feature increasing BC Liberal strength.

The neighbourhoods that look especially-promising for recall are those located on the west side of the riding, between Haultain Street in Victoria, in the south, to Feltham Street in Saanich, to the north.

Generally speaking, this is the area lying east of Shelbourne Street and Cedar Hill Road (the riding's western boundary) and west of the University of Victoria, the Uplands Golf Club and Cadboro Bay Road.*

If Vander Zalm's anti-HST canvassers were to get signatures from, say, 55-60 per cent of the registered voters in this area, that would be about 6,000 names.

Another, but smaller NDP-stronghold lies in the heart of the municipality of Oak Bay.**

Combined, these two NDP bastions -- which represent just one-quarter of registered voters -- could produce more than 7,000 recall signatures, or nearly half of the 15,000-plus needed to remove Chong.

And that means the remaining 80 polls would have to produce about only 100 signatures each -- or about one from every four registered voters -- to reach the recall threshold. 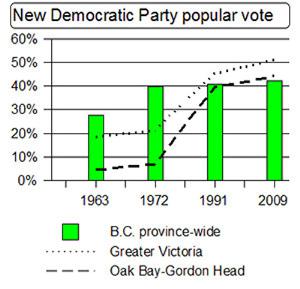 Another demographic factor bodes well for recall. The riding is home to a large number of residents age 65 years and older. Whereas 14 per cent of British Columbians are "seniors," in Oak Bay-Gordon Head that figure is 21 per cent.

And that means that day-time canvassing -- when elderly residents are at home, because they no longer are in the workforce -- will be more fruitful than in most other ridings across the province. (Election canvassing usually takes place between 5:00 and 8:00 pm, when voters have returned home from work and the opportunities to make contact with them are greater than during the work-day.)

If Vander Zalm's recall canvassers are clever, they'll already have obtained census tract data from Statistics Canada to learn which polls and neighbourhoods have the highest concentrations of seniors, and target those for day-time calls.

(And not only will these day-time canvasses yield signatures, they also should generate additional volunteers as still-fit seniors sign-up to participate in the recall campaign.)

Will Bill Vander Zalm's anti-HST forces succeed in organizing the campaign to remove Ida Chong? Could Oak Bay-Gordon Head's BC Liberal MLA be the first to be removed from office through the province's recall legislation?

The answers to these questions depend on how well Vander Zalm and his team conduct their recall campaign. The choice of Oak Bay-Gordon Head as the site of their inaugural recall effort suggests that they're off to a good start.