It's easy to get demoralized these days with so much going wrong around the world. So it is incredibly encouraging to see a campaign for justice and workers' health and safety prevail against supposedly insurmountable odds. 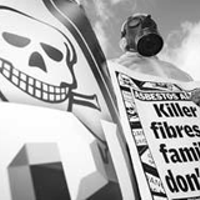 Insurmountable is how the odds would have been described a year and a half ago for anyone musing about taking on the asbestos industry in Quebec.

It would be difficult to come up with an example of a more entrenched and powerful adversary. A year ago, the remnants of a once enormous asbestos mining industry had literally every powerful political and economic player in its corner: all the federal political parties, including the NDP and the Liberals; all of the provincial political parties in Quebec; all the business and corporate players provincial and federal; the entire Quebec union movement and the Canadian Labour Congress; and by their meek silence (with a couple of exceptions) the medical and academic scientists whose voices could have made an enormous difference.

A year later and the asbestos industry and its lethal product are literally on their last legs, assailed from (almost) all sides. One after the other the supporters of this dying/killing industry have changed sides, bowing finally to a relentless campaign backed up by   indisputable science declaring that asbestos -- all asbestos -- kills and maims. The latest news is out of Quebec, where the final battles are, of necessity, taking place.

It is instructive to all those who assess the prospects of certain struggles as impossible to win, to read that the Quebec Liberal government -- a centre-right, pro-business party -- is now considering abandoning the industry that just weeks ago it was pledging to give its undying support. A story in Monday's La Presse reported that "...a high-level meeting took place last week between the three government stake-holders most affected by the issue: the Minister of Health, Yves Bolduc, the Minister delegated to Natural Resources, Serge Simard, as well as the president of the National Public Health Institute of Quebec (INSPQ), Luc Boileau."

Those at the meeting are declining comment about media speculation that the government of Jean Charest is examining "the possibility of revising its position on asbestos between now and the end of the year."

Such an examination was deemed inconceivable even four months ago. But the revelation that the government is even thinking about changing position means it will be extremely difficult to put the genie back in the bottle. Its best strategy for maintaining the status-quo would have been to say nothing at all. In the asbestos fight, once you talk about it, your fate is decided. Charest's office is denying that they are considering changing policy, but it is an enormous crack in the asbestos edifice that the meeting took place, no matter how they try to explain it away.

A victory for science and morality

Just ask Michael Ignatieff -- who came full circle last spring and summer, making the banning of asbestos Liberal Party policy. Ignatieff entered the debate off-guard -- drawn into it by an activist at a Victoria public meeting. His response was an unguarded, moral one: "Our export of this dangerous product overseas has got to stop." He tried to wriggle out of it after being pounded by his own party heavy weights and the Quebec media. But it was too late: the morality of the exports was the issue.

The popular Tyee columnist now publishes his own blog: murraydobbin.ca.

Ignatieff initially claimed the science wasn't clear. But that route was suddenly blocked by the coincidental release of two reports -- one by Health Canada (suppressed for a year) -- and another devastating study by the International Agency for Research on Cancer, the world's most respected cancer organization. Both confirmed chrysotile asbestos a deadly Class 1 carcinogen.

To his credit, Ignatieff stuck to his original gut response: exporting this stuff was immoral.

The NDP had earlier been obliged to abandon its position -- just as it was making in-roads in Quebec -- faced with determined lobbying and the sheer weight of the moral argument. Ken Georgetti, president of the Canadian Labour Congress, too, took the risky step of alienating the CLC's Quebec wing by calling for a ban after an emotional appeal on behalf of sick and dying workers by one of India's largest unions.

The role of science in this struggle is as gratifying as that of the moral imperative's victory over economics. Science has taken a severe beating in Canada and the U.S. over the past 15 years, with governments all but abandoning the precautionary principle for the market's "risk assessment" approach. Whether it's tainted meat or climate change, the right's fierce attack on science has had the effect, amongst others, of intimidating many scientists whose role it is to protect society.

But the junk science produced by the asbestos lobby -- in particular the Chrysotile Institute (headed up by the former president of the Quebec Federation of Labour) -- has ironically put some steel in the spine of those assigned with the task of informing the public about health issues. Indeed, it's as if a dam had broken in Quebec and all the data and many of the scientists involved, suddenly flooded into the public realm.

Fifteen doctors, toxicologists, occupational hygienists and epidemiologists, several of them professors at the universities of Montreal, Laval and Sherbrooke, issued an extraordinarily powerful public statement calling for an end to Quebec's asbestos exports. The La Presse headline could not have been more clear: "It's time to stop the asbestos lies."

The Chrysotile Institute's core argument has been that asbestos is not harmful if "used safely." But perhaps it was the lie about safe use in Quebec itself that has finally moved the media and the Quebec political elite, to reluctantly reconsider. Quebec's National Public Health Institute has issued a total of 11 reports proving that the claim of "safe controlled use" of asbestos in Quebec is a myth. The lethal cancers directly related to asbestos are increasing in Quebec by four per cent a year. And the province's definition of "safe levels" of exposure is ten times more lenient than most of Europe and the U.S. and a 100 times more than the Netherlands, Germany & Switzerland.

There are still powerful hold-outs on the asbestos front, the most aggressive among them, Prime Minister Stephen Harper. "The Conservative party is the only political party that can be trusted to defend the asbestos industry," stated Harper, claiming that the Liberals were being "duped and manipulated by extremist groups." That would be, I suppose, the Canadian Medical Association, the Canadian Cancer Society and the International Labour organization.

Another hold-out is Gilles Duceppe and the Bloc Quebecois. Most shameful of all is the entire Quebec labour movement, led (or bullied) by the Quebec Federation of Labour, which continues its complicity in the destruction of the lives of potentially thousands of Third World workers so it can maintain "solidarity" with the few hundred miners still working (at much reduced wages) in the sole remaining mine.

But even these final dominoes will fall, sooner or later. The relentless campaign against death and disease, rooted in a moral imperative and public science, and spearheaded by Kathleen Ruff, human rights advisor with the Rideau Institute (disclosure: I am also an advisor with the Rideau) has converted powerful individuals, political organizations and a major Quebec media outlet -- players no one dreamed would change their views.

We'll see who finds their moral compass next.