Premier Campbell and Finance Minister Colin Hansen admit that their harmonized sales tax (HST) shifts $1.9 billion in tax from businesses to B.C. families. That's what it means when they say the tax saves businesses $1.9 billion per year while keeping the government revenue-neutral; in other words, you pay more to make up for what businesses will save. You will do that by paying a 12 per cent HST on almost everything that currently attracts only a 5 per cent GST (children's clothing, gasoline and diesel fuel are exceptions). 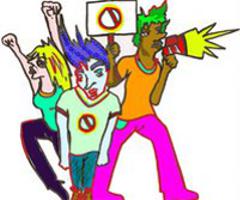 A shift of $1.9 billion per year from businesses to B.C. families makes the HST the biggest tax shift in B.C. history.

Campbell's radical 2001 tax cuts cost $1.5 billion with just 8,000 people receiving 14 per cent of the benefits. His 2002 50 per cent increase in MSP premiums cost B.C. families about $450 million per year. It is hard to find anything that comes close to the $1.9 billion per year HST tax shift. Dividing that by B.C.'s population of 4.4 million produces an average tax shift of $428 for each person, infant to senior; it is $1,714 for a family of four. Of course all families are not equal. As a proportion of their income, high-income families will devote less to paying the HST than middle income families, so the HST is regressive.

Why would the B.C. Liberals shift $1.9 billion per year in taxes from businesses to B.C. families? Some apologists argue that businesses never end up paying taxes because they can pass them on to their customers, but that ignores how taxes impact profits and dividends and it ignores how prices are determined in various industries. That argument is not used in the government's news release, but it does claim that the HST tax shift will boost new business investment. What evidence exists to prove that claim?

Apparently, like Ontario, the Campbell government relied on just one flawed study, not published in a peer-reviewed journal but as a 2007 Commentary from the C.D. Howe Institute. That study, by Professor Michael Smart of the University of Toronto, looked at Nova Scotia, New Brunswick, and Newfoundland, all of which replaced their provincial sales tax with the HST on April 1, 1997.

How smart is the Smart study?

The HST is called a value-added tax because it applies only to final consumption, not to business inputs like machinery and equipment. By contrast, the tax it replaces goes by several names: provincial sales tax (PST), retail sales tax (RST) and social services tax. Those are three names for the same thing, and that is a tax that applies to both businesses and consumers.

In its March 26, 2009 budget, Ontario announced that effective July 1, 2010 it would replace its RST with the HST. Its announcement included details on a host of transition measures, from assistance to businesses that will have to change their cash registers to as much as $1,000 per eligible family for transition assistance.

On July 23, when the legislature was not sitting and only two months after the provincial election, British Columbia announced that effective July 1, 2010 it would replace its PST with the HST. B.C.'s announcement was short on details; however, a Ministry of Finance HST website has been established which includes quick contact phone numbers to both the Canada Revenue Agency and the Ministry of Finance.

Campbell and Hansen argue that tax savings by businesses will probably be passed on to consumers. The Michael Smart study, cited by the Campbell government to defend its surprise announcement, reported (p. 12) that "...CPI prices fell by about 0.3 percent in HST provinces after 1997, compared to the corresponding change in RST provinces. This difference is statistically insignificant but extremely close to the estimated 0.5 percent reduction in taxes under the reform." In this context "statistically insignificant" means that there is an equal chance that the implementation of HST could have caused prices to go up or had no effect at all. In other words, nothing was proven.

The study went on to report details on eight components of expenditures, with a footnote regarding statistical significance. Five of the eight components of expenditure were not significant at the '5 per cent or less' level. Shelter showed a statistically significant (1 per cent level) increase of 1.4 per cent. That is one of the reasons the study concluded that the implementation of HST was "mildly" regressive.

Smart's conclusion that the adoption of HST produced increased investment is wrong. In discussing a graph (p. 8) which showed investment per person in HST and RST provinces, he admitted it didn't really prove that differences are caused by the adoption of the HST. He wrote: "Certainly, investment in Newfoundland has risen with the development in recent years of the offshore oil sector." He should have paid much more attention to investment in both Newfoundland and Labrador and Nova Scotia due to offshore oil and gas activity -- Hibernia, Terra Nova and White Rose have nothing to do with HST, nor does Nova Scotia's Sable Island energy development, described as "the largest construction project ever undertaken in Nova Scotia."

Smart attempted to adjust for the obvious distortion caused by the offshore oil and gas activity by running a regression analysis of per capita investment on per capita GDP with a variable designed to measure the change when the HST was implemented (what economists call a 'dummy variable'). Smart's dummy variable could have measured other factors, including the period when the offshore play was most intense, instead of measuring any effect of HST. He attempted to adjust for this by using data by industry and excluding mining (which includes oil and gas), but those data were only available for 1992 through 2005 -- just five years of observation before the HST was implemented. Even if mining is excluded, spinoff activity in other industries would still reflect the offshore play -- hence, his dummy variable could have measured that rather than anything to do with the HST. There are fundamental flaws in Smart's model, the period he choose for analysis and his interpretation of statistically insignificant results. Nevertheless, his study is being used in both Ontario and B.C. as justification for a massive tax shift.

As shown in the graph illustrating this article, the provinces which adopted the HST in 1997 also had a spurt of investment growth in the 1980s. By not including that period in his analysis, Smart is not on solid ground with claims that investment growth was due to the switch to the HST rather than due to offshore oil and gas development. Most importantly, even Smart emphasized that if there were increased investment due to the switch to the HST, it would be a short-term phenomenon (p. 1).

The graph shows business gross fixed capital formation in machinery and equipment for Newfoundland and Labrador, Nova Scotia, New Brunswick and British Columbia relative to what it was in each province in 1981. For example, it was $3.572 billion for B.C. in 1981 and $11.331 billion in 2008, so the B.C. index for 1981 is 100 and for 2008 it is 317. By converting to an index like this it is possible to compare B.C. with the smaller provinces, which together have only once had even half as much investment in business machinery and equipment as B.C.

Notice that throughout the '80s, the three Atlantic provinces had higher investment relative to what they experienced in 1981 than B.C. did. In the early '90s, the four provinces were in roughly the same relative position and then investment in Nova Scotia and Newfoundland and Labrador took off relative to B.C. and New Brunswick. Of course, that was the period when Newfoundland and Labrador and Nova Scotia had high levels of offshore oil and gas investment.

Progress Board warned of ‘highly visible shift of tax burden’

In December 2008, the B.C. Progress Board published a report, prepared by three researchers from the Centre for the Study of Living Standards, on Investment in British Columbia in which it recommended the adoption of the HST. It stated (p. 2):

"Evidence from the Atlantic provinces, which harmonized their sales taxes with the federal Goods and Services Tax, suggest British Columbia could experience a 12.1 percent increase in trend M&E investment as a result of adopting a value-added tax. These results imply that adopting a value-added tax could result in M&E investment as a share of GDP in B.C. of 6.8 percent in 2007 (as opposed to 6.1 percent), thus closing 70 percent of the M&E investment gap between B.C. and the national average (7.1 percent). The potential public opposition to this measure should not be underestimated, however, and there could be a protracted adjustment period."

Protracted adjustment period might be a euphemism meaning that the claimed benefits might not be seen for a very long time. The Progress Board didn't say how long the adjustment period might be, but page 31 of its report made it clear that its claims about 12.1 percent higher investment came from Smart's study published by the C.D. Howe Institute in 2007. The report went on to say: "Moving from a tax on business inputs to a tax on consumer goods and services entails a substantial and highly visible shift of the tax burden from businesses to consumers, even if the reduced input costs are eventually passed on to consumers in the form of lower prices."

According to the government's July 23rd news release, "substantial" means a tax shift of $1.9 billion from business to consumers.

If the Campbell government had done its homework prior to making its post-election announcement, it might have learned that the HST is regressive, that it might not stimulate investment in the short or medium term, and that business cost savings are unlikely to be passed on to consumers. Perhaps the most accurate comment offered to the premier by his Progress Board was about the angry reaction of voters.