Representatives of two First Nations in the Great Bear Rainforest and a conservation financing group are in Colombia this week to share what they’ve learned about supporting environmental stewardship and sustainable economic development.

The trip follows a visit to British Columbia in 2015 by a World Wildlife Fund delegation of Indigenous people from around the world, said Brodie Guy, the executive director of Coast Funds. That delegation included visitors from Colombia and Peru who are working on setting up something similar in their home to what’s been done in the Great Bear.

“Now they’ve asked us to come back because they’re getting much further along in their conservation plans and also their financing,” Guy said.

The Great Bear Rainforest agreement process brought together First Nations, forestry companies, environmental groups, local governments and the provincial government to find a new approach to land use and planning for the central and northern coast of British Columbia. The area covered is 6.4 million hectares.

The parties agreed to the broad principles in 2004, followed by agreements in 2006 and 2009 aimed at protecting the rainforest, improving logging practices, involving First Nations in decision-making, and providing funding for economic diversification.

As part of the process, Coast Funds was created in 2006 with a $60 million endowment to encourage stewardship and a further $60 million to help fund the creation of First Nation-owned businesses. The money came from the provincial and federal government and six foundations.

Guy said it’s one of only a few such organizations in the world, alongside ones working in Bhutan, Costa Rica and Brazil.

On Monday, Guy travelled to Colombia along with Merv Child, the executive director of the Na̲nwak̲olas Council, and Douglass Neasloss, chief councillor of the Kitasoo/Xai’xais Nation.

Child was unavailable for an interview but was quoted in a press release saying, “Conservation financing efforts, such as Coast Funds here in British Columbia, that invest in both sustainable development and environmental stewardship, are still globally rare... But where they have been established, they have proven to be extremely successful.”

The release quoted Neasloss saying conservation financing had made a big difference to the Kitasoo/Xai’xais community of Klemtu. “We went from almost 90 per cent unemployment to almost 90 per cent employed... The message we want to share in Colombia is permanent financing works and it’s essential for the people who live in protected areas.”

Hosted by WWF Colombia, they will meet with delegates from the Dedicated Grant Mechanism Saweto Memoria Viva from Peru, the Visión Amazonía Program from Colombia and the Herencia Colombia Program.

According to the agenda, the goal of the meetings is to “identify lessons learned and recommendations that strengthen the design and implementation of long-term financing mechanisms for conservation, and mitigation or adaptation to climate change initiatives, with Indigenous peoples.” 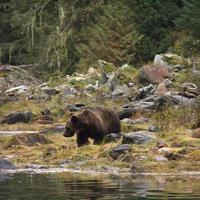 Guy said that over the last 10 years, Coast Funds has approved $77 million in investments that First Nations have been able to use to attract further investment, “Significantly changing the economy of the coast.”

Some 900 jobs have been created through Coast Funds investments, representing about 12 per cent of the available First Nations workforce in the region, Guy said.

The focus isn’t just on creating jobs. Projects include cultural and language components, and investments are chosen with local ownership and conservation top of mind, he said. “It’s not an extractive economy,” he added, referencing the area’s history of industrial logging. “[It’s] fundamentally different from a MacMillan Bloedel approach to economic development.”

While government and NGOs have roles, First Nations ultimately govern Coast Funds, Guy said. The key, he said, is “being in control of your future, your destiny, but working with government or those NGOs that have something to offer, but doing it in the right way for your people.”