Parliament Hill was bathed in sunlight Wednesday morning as groggy Ottawa politicos, some still in shock after Tuesday night’s events in the United States, went about their business in the capital while wondering what comes next.

A brisk breeze tried its best to wake up political and government staffers as they walked past the usual herd of tourists on the Hill’s front lawn.

“Where are you from?” asked a weathered-looking, elderly man wearing a ball cap adorned with a poppy to a young Asian man taking a photo of the Peace Tower.

After getting his answer, the inquisitive man put his hand on the tourist’s shoulder and said “Welcome to Canada” before walking away.

Further up the steps, in the same hallway a troubled young man armed with a rifle stormed through firing shots in the name of Islam in 2014, a large crowd squeezed together for a photo in the Hall of Honour.

Their cheers echoed throughout Parliament, as if a high school volleyball tournament was being played.

As they dispersed, a cheery Prime Minister Justin Trudeau emerged from the centre of the crowd smiling and saying farewells before bouncing away toward the elevator. A security guard said the group were constituents from Trudeau’s Montreal riding.

Otherwise the halls of Parliament were more filled with sunlight than people, typical in a week when the House of Commons does not sit.

But the election of Donald Trump and its effect on Canada was much on the minds of everyone on Parliament Hill.

Laverdiere said Trump’s positions on climate change, security and trade all undermine Canadian positions. The government must stand up for things in which Canadians believe, she said.

“We do have to engage,” Laverdiere said. “We need to be there, we need to raise our voice, we need to promote what our values are. No, we cannot stay on the sidelines.”

Leitch praised Trump and suggested a similar political change is needed in Canada.

“Tonight our American cousins threw out the elites and elected Donald Trump as their next president,” Leitch, a doctor, professor and former cabinet minister, said in a campaign statement. “It’s an exciting message and one that we need to deliver in Canada as well.”

“She talks about screening for Canadian values and she is happy to see Mr. Trump elected,” Laverdiere said. “I don’t think the values Mr. Trump has shown during the campaign are shared by many Canadians. We certainly have a problem with definitions of what Canadians values are.”

The Conservatives lost last year’s election despite a campaign that included announcements like the barbaric cultural practices hotline.

Meanwhile two other prominent Conservatives praised the election of Trump.

“The ignoring of suffering people by American political, and business, elites has been repudiated and crushed,” tweeted Conservative public safety critic Tony Clement.

Clement has supported Canada’s free trade deals, including NAFTA, which Trump blames for lost jobs in the U.S. 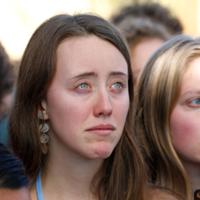 OK Everybody, That Sucked. Now, Back to Work

“Congratulations to Donald Trump on his impressive victory. Canada/US partnership is strong. There is much to do, incl moving ahead with KXL,” tweeted Harper, referring to the Keystone oil pipeline rejected by President Barack Obama.

Trudeau also reached out to Trump, saying “Canada has no closer friend, partner, and ally than the United States” and that his government looked forward to working “very closely” with the president-elect.

Laverdiere said she hopes Trump has solid advisors and Ottawa can adjust to the changed political landscape and build a relationship with the Trump administration.

“It came as a shock to many people, but we must forge ahead and we must continue working for a true progressive and inclusive future,” she said.