Stephen Harper is a goner -- and his cats aren't coming back. 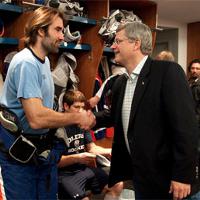 Why Harper Wants You to Know He Loves Hockey

The outgoing prime minister has long been known to have a fondness for felines -- indeed, prior to being elected in 2006, Harper quipped he was like one himself, because of his many political lives.

And as he prepares to begin anew as a member of the Tory backbench, so too are his cats preparing for a new life of their own.

Stanley and Gypsy -- along with Charlie, a pet chinchilla -- are all moving out of 24 Sussex Drive to live with the Harper family at their new permanent digs in Calgary.

What's more, the many foster-animal friends that had been living at the prime minister's official residence in the months before the election were all found new homes in the summer.

The Harpers have fostered dozens of cats, as well as a number of other small animals, since moving in nearly a decade ago. Eventually, they devoted an entire upstairs room to the cause.

Some of the animals were eventually adopted by political staffers, others by MPs and cabinet ministers.

Harper's wife Laureen was a prominent volunteer for the Ottawa Humane Society, among other things acting as the honorary chair for the organization's annual gala, the Fur Ball.

"She's been tremendous; some years she's been our most active foster volunteer," Bruce Roney, the executive director of the Ottawa Humane Society, said in a statement.

"She's contributed greatly both hands on and by her presence to the Fur Ball and we're grateful for her involvement."

The Harpers' fondness for cats is well-documented, going as far back as their wedding where two felines were part of the party, one in a bow tie and one in a lace collar.

The death of a former cat, Cartier, was even noted by Sen. Mike Duffy in his prolific diaries that form part of the evidence in his criminal trial.

But Charlie the Chinchilla was especially prominent in the family's later political years -- he was featured in the family's 2013 Christmas card and also starred in a YouTube video.

Charlie even has a mock Twitter account in his honour -- one that was active during last week's fateful election night, when Harper's Conservatives were ousted by Justin Trudeau's Liberal party.

"Quick question to @JustinTrudeau," read a tweet posted to the account. "How do you feel about chinchillas? Asking for a friend."

The Trudeau family isn't moving into 24 Sussex when Trudeau officially becomes prime minister next week, citing the need to be fully briefed by officials on the building's condition first.

The risk of political repercussions has for decades prompted the heritage building's various residents to defer badly needed renovations, said to carry a price tag of well over $10 million.

Whether the presence of so many animals inside the home over the last nine years has contributed to the need for repairs wasn't something the National Capital Commission, which manages the property, would say.

"At this point, we are unable to provide further information on the plans for 24 Sussex Drive," spokesman Jean Wolff said in an email.