In its most controversial strategic voting endorsement, Leadnow is backing New Democrat Mira Oreck over Liberal Jody Wilson-Raybould in the new riding of Vancouver-Granville. 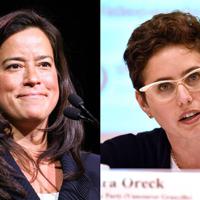 The Liberals are angry about the NDP endorsement given recent polls showing their candidate ahead of Oreck. But they say Leadnow's nod to the New Democrat isn't enough to defeat Wilson-Raybould who, they believe, has the momentum in the final days of the election.

Leadnow executive director Lyndsay Poaps said the process used in Vancouver Granville was "transparent" and was made -- not by Leadnow officials -- but by thousands of residents who had signed the group's Vote Together pledge.

The third and final Leadnow-commissioned poll in Vancouver Granville found that Wilson-Raybould and Oreck were in a dead heat, with the Liberal at 35 per cent and the New Democrat at 33 per cent. Conservative Erinn Broshko trailed at 28 per cent.

Poaps said that 96 per cent of about 2,000 respondents wanted to endorse a candidate, with 61 per cent selecting Oreck and 38 per cent choosing Wilson-Raybould.

Liberal communications official Mike Witherly said the Leadnow decision is "a little puzzling given the evidence seems to suggest the Liberals are in the lead. It seems to me that doing this undermines the purpose of the organization."

Witherly added that Leadnow was ignoring its own final poll, conducted by Environics Research, and a second poll conducted for the pro-CBC Friends of Canadian Broadcasting, which gave Wilson-Raybould a commanding lead, at 44 per cent, to Oreck at 28 per cent, with Broshko at 20 per cent.

"So if put those two polls together, it's pretty clear who is leading," Witherly said.

The Liberal spokesman added that "it seems to me that they [Leadnow] had a special process for this riding."

But Poaps said that Leadnow's endorsement process in Vancouver Granville was identical to the one followed in every other swing riding where the group backed a candidate to defeat a Conservative. She said Leadnow supporters have backed many Liberals across the country "even if that might not have been the party of their choice."

The only unusual quirk in Vancouver Granville was the decision to ask Leadnow pledge signers whether they wanted to make an endorsement, she said. "It was the only riding where there was polling that reflected a statistical tie."

Poaps added that Leadnow has always said that its endorsements would also be based on the party's platform and not solely on polling. Many of the Vancouver Granville Leadnow supporters might have felt more of an affinity with the NDP than the Liberals because of policy differences, she said.

Liberal candidate Wilson-Raybould, in an email, said the Leadnow decision won't prevent her from taking the seat. "I am confident that the people of Vancouver Granville will make their own choice for real change, and that it will be Liberal."

Meanwhile, Leadnow's Poaps said she is not a member of the NDP but acknowledged that she and Oreck have worked together previously. Poaps founded the Frontrunner School, a group dedicated to getting women involved in politics. Oreck worked with Frontrunner as a volunteer.