The continuing deterioration of a derelict ship moored to an unsecured toxic waste site on the B.C. central coast is a marine ''disaster'' in the making, say groups long pressing for it to be cleaned up. 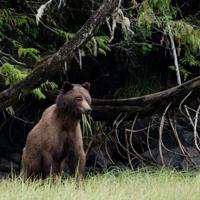 'The Oil Man and the Sea'

The failure to act, they say, proves the inability of government to keep the Pacific Coast safe from pollution.

New video acquired by The Tyee, shot by Pacific Wild Executive Director Ian McAllister and April Bencze on Dec. 10, shows a timelapse of the 570-tonne Chilcotin Princess loosely moored to the dock of the former BC Packers salmon cannery at Namu and crashing against crumbling foreshore buildings known to hold barrels of oil and other waste. (Play the video at the top of this story.)

The video also documents what appear to be hydrocarbons leaching from the dilapidated buildings on the sprawling 80-acre site, located about 130 km north of Port Hardy.

A voiceover written by McAllister draws connections between the long-standing problems at Namu and proposals to increase the number of tankers carrying oil sands crude along the B.C. coast.

The video calls Namu "a reminder that the federal and provincial governments do not have the capacity or motivation to deal with oil spill response on the B.C. coast despite claims of world class spill response capability."

'Get rid of that ship'

The ship itself was brought to Namu several years ago by owner Dave Milne to clean up the site. That never happened, and today the decaying ship is adding yet another layer of complexity to an environmental liability that continues to grow.

With the departure of Namu's full-time caretaker in 2013, the remote site is now abandoned to the elements -- a situation that McAllister says could spiral out of control if action is not taken soon.

"We're not saying the whole thing has to be cleaned up overnight," says McAllister. "But at least shore up all the things that are going into the ocean and get rid of that ship before it sinks and causes even more problems."

Namu, Gateway to the Great Bear

Long before Namu was a salmon cannery (established in 1893, bought by BC Packers in 1928), it was a Heiltsuk First Nation village under continual occupation for at least 10,000 years. The cannery shuttered in 1969 without being cleaned up, leaving behind a toxic mess conservatively estimated at $10 million in 2006.

Contamination at the site, documented by the University of Victoria's Environmental Law Centre in 2011, includes hydrocarbons from "tank farms," storage sheds and houses, as well as sulphuric acid, ammonia, and lead and copper contamination. Transformers remain in residential areas and most buildings contain asbestos. "Many structures and much contamination could fall in water," states the document.

The property was eventually bought by Milne through his company Namu Properties Ltd, with a plan to attract boating tourists to the site.

The current state of the Chilcotin Princess -- which is currently listing in the rich sockeye salmon estuary directly in front of Namu -- is just the latest outrage for the Heiltsuk, who in 2011 were successful in repatriating the human remains of ancestors to the Namu area from Simon Fraser University. The Namu foreshore and private holdings of the former cannery directly border a protected conservancy in the province's much celebrated Great Bear Rainforest Agreement.

"Namu is right in the middle of the Great Bear Rainforest and in the middle of B.C.'s renowned Inside Passage, but there doesn't seem to be any interest in talking about the clean up," says Bella Bella-based Heiltsuk hereditary chief Harvey Humchitt Sr., whose father was a gillnetter for BC Packers and mother worked at the cannery. He said a November meeting with the province to discuss the deterioration of Namu was cancelled at the last minute with no explanation given.

The ship and unsecured Namu site pose an increasing risk to the sockeye food resource needed by the Heiltsuk -- particularly those living in nearby Bella Bella.

Early last September, Heiltsuk Nation Aquatic Manager Mike Reid reached out to the federal Canadian Coast Guard in Prince Rupert to convey his concerns that the ship's hull could rupture during low tide and pollute the salmon estuary, especially with the coming of fall and winter storms. "If you need a boat to access [the ship] we could possibly help given enough notice," he wrote from his office in Bella Bella.

The next day, the Coast Guard in Prince Rupert confirmed that Namu's owner was planning to tow the vessel away at the end of October. "I will stay in communication with the owner and you Mike, to ensure he follows through," wrote CCG's George Armstrong. But Oct. 31 came and went. Pressed further, the Coast Guard told Reid on Nov. 26 that the owner was planning to have the Chilcotin Princess towed to the Fraser River for metal salvage disposal. But as of this writing, the ship remains in Namu.

Reached in late December, a Canadian Coast Guard spokesman would not acknowledge or explain the missed Oct. 31 deadline. He said their mandate was limited to dealing with ship-source oil-based pollution. "There have been no reports of fuel/oil pollution from the vessel Chilcotin Princess. Given that the owner of the vessel is engaged and working with CCG, the vessel is not considered to be abandoned or derelict."

A confusion of laws in play?

The ship and toxic site are two separate issues to be addressed separately, say those advocating for action. The Chilcotin Princess needs to be safely towed away and scrapped, while cleaning up the land will require much more time, planning and political will to address.

Among those working for years to press officials to clean up the Namu site are the Heiltsuk First Nation, Hakai Institute, the University of Victoria Environmental Law Centre, and Pacific Wild.

The slow-motion disaster at Namu brings numerous provincial and federal laws into potential play, said Chris Tollefson, Hakai Chair in Environmental Law at the University of Victoria's Environmental Law Centre. He toured the site this past fall.

Federal regulations may include the Shipping Act, the Fisheries Act (prohibiting damage to salmon or salmon habitat) and the Canadian Environmental Protection Act. Provincially, there are general prohibitions of discharging waste on land, as well as specific provisions of the Environmental Management Act.

"It's a little difficult to know which ones apply and how, until you have a full audit of what's going on," Tollefson said. "But if need be, government should not delay moving in and taking over the task of stabilizing the site before we're in a scenario where we are cleaning up a real disaster."

Reached on Dec. 31, 2014, David Milne of Namu Properties confirmed that his company remains the owner and responsible party in control of Namu. He dispelled rumours the business was bankrupt and no longer involved in a potential clean-up.

He said the Chilcotin Princess will be towed to Richmond, B.C. for salvage at some point in January, while plans are also afoot to start dealing with the situation on land. "[We're] currently working on plan to remove old herring reduction plant and other deteriorating structures around the foreshore area," he added by email.

In a Dec. 29 email, a Ministry of Environment spokesman confirmed the site owner has a new deadline -- until the end of the 2014 calendar year to submit a written plan and schedule outlining the "immediate actions required to ensure the site is in a safe condition." The province noted that if the steps taken are not sufficient, it has legal tools to force an owner to plan and undertake further clean up.

That deadline has now passed. The coming weeks will tell whether the province will follow the federal example and let another deadline pass by.