Member of Parliament David Wilks likely never expected his challenge to go viral, but last night at least 80 Conservative MPs across Canada -- 24 in B.C. alone -- faced protests from citizens hoping they'd be among 13 to vote against their own party's omnibus budget bill, Bill C-38. 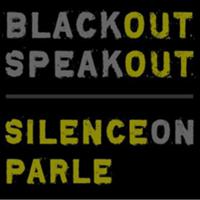 Why a Lot of Websites Are Black Today

Even Wilks had demonstrators outside his office calling for him to be a "hero" and break party ranks over the bill's controversial changes to everything from the Fisheries Act to Employment Insurance. On May 22, the Kootenay-Columbia riding Member of Parliament had told constituents, "If Canadians want it changed, then enough Canadians have to stand (up) to their MPs and say 'no' ... You're going to need 13 Members of Parliament."

Although the MP quickly recanted his views, his appeal to find 13 Tory turncoats caught on amongst Bill C-38 critics.

While demonstrators rallied across Canada, at events organized by the group Leadnow.ca, the House of Commons began a 24-hour, 159-vote filibuster by Opposition politicians hoping to break up the sprawling budget implementation bill into smaller pieces.

Over night in Prince George

"We want 13 hero Conservative MPs to vote 'nay' on the budget," said Geoff de Ruiter, one of nine demonstrators camped out overnight in front of Prince George MP Dick Harris' office. "Maybe Dick will notice our efforts and see we are his dedicated constituents.

"With that help, we can at least make the budget (bill) at least somewhat equitable to Canadians. This would help protect the environment and democracy by allowing voting on individual bills, and not an omnibus bill."

At another demonstration in Conservative MP Wai Young's riding, Vancouver-South, roughly 100 people gathered outside her office.

"Democracy depends on our elected representatives hearing our concerns," said the Rev. Lynne McNaughton, rector of St. Clement's Anglican Church, who lives in Young's riding. "Democracy is a deeply held Canadian value, but this bill is eroding democracy.

"What I see in this bill is going backwards in terms of care for the Earth and care for the rights of human beings. Putting it all together means we can't debate it. There hasn't been a reasonable conversation about the effects of these environmental laws."

The bill's critics argue that, as an omnibus law, Bill C-38 cannot be adequately debated, despite its proposed changes to at least 70 pieces of legislation – including substantial amendments to the Fisheries Act, Employment Insurance, old age pensions, and First Nations land management.

Preparing for a marathon voting spree in the House of Commons, Finance Minister Jim Flaherty admitted the law was not perfect, but criticized procedural manoeuvres by the Green Party, New Democrats and Liberals to delay its passage.

"I'm sure there are items in the bill that could be improved and made better," Flaherty told reporters yesterday. "We always do that in government over time. 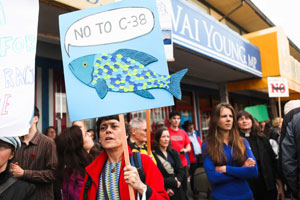 Anne-Marie St. Laurent outside Member of Parliament Wai Young's Vancouver-South riding office: "What this bill stands for is not democratic." Photo by David P. Ball.

"The bill is the economic policy of the government -- it's the big plan for the government for the next decade. It's a generational plan, so it's not about bits and pieces. It's about the big picture, that's why it's so important that we move forward, particularly given what's going on in the world."

The Department of Finance Canada declined to comment on specific criticisms of Bill C-38. 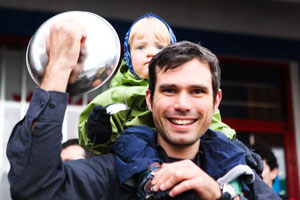 "What this bill stands for is not democratic," Skladan said. "We should be able to have a look at what we're voting for, rather than just pushing it through without knowing anything about it. It's secretive and it's wrong.

"There are all sorts of things that are just being snuck into this bill... It's not a budget bill -- it's about hiding things from Canadians.