A charter airline owned by a BC Liberal bagman billed taxpayers almost $97,500 for Premier Christy Clark's flights last year and even gave a lobbyist a free ride. 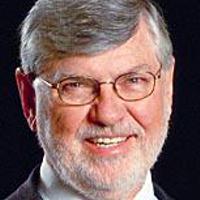 How Gordon Campbell's Policies Made a Rich Friend Far Richer

The flight was destined for a news conference in Kitimat where Rio Tinto Alcan announced a $2.7-billion upgrade to its smelter, but turned back to Vancouver International Airport after 372 nautical miles "due to poor weather conditions," according to the invoice obtained via Freedom of Information. Energy Minister Rich Coleman, press secretary Chris Olsen and executive assistant Gabe Garfinkel were the other passengers. It was a rare flight for Clark without an RCMP bodyguard.

Prokopanko was a ministerial assistant during premier Bill Vander Zalm's Social Credit Party administration in the 1980s. His wife Jacquie was an aide to Conservative cabinet minister David Emerson and donated $1,350 to the Liberals from 2005 to 2008. When contacted by The Tyee on March 1, Prokopanko refused to do an interview about details of his trip with the premier.

"I'm not the spokesperson for Rio Tinto," Prokopanko said. "I'd be pleased to take the questions and get them back to you."

Prokopanko did not respond with answers to the questions posed. The government records given to The Tyee do not indicate a third party was billed for the guests' transportation. Shane Mills, the premier's director of communications, confirmed the guests but did not respond to an interview request or reply to questions about why Prokopanko flew on a government-paid charter.

Blackcomb Aviation is owned by David McLean, the chairman of CN Rail who donated $209,707.50 to the Liberals since 2005. McLean's sons Jason and Sacha run the company, which donated $23,035 of flights to Clark's leadership campaign. Jason McLean, an aide to prime minister Jean Chretien from 2000 to 2002, is the McLean Group president and immediate past chair of the Vancouver Board of Trade. He gave the BC Liberals $1,600 in 2006.

Clark's flights tend to be for photo opportunities, such as the one on Sept. 8 that cost $18,855.88. Passengers who also went to the Fort Nelson Oil and Gas Conference included Clark's assistant Jessica Hodge, Coleman and his assistant Jordan Bell, Transportation Minister Blair Lekstrom, videographer Kyle Surovy and a bodyguard, whose name was censored. Peace River North MLA Pat Pimm, Coleman's parliamentary secretary, joined for the return leg to Vancouver. 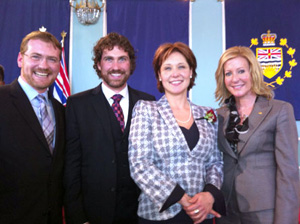 Premier Christy Clark with Blackcomb Aviation CEO Sacha McLean (left) and Chairman Jason McLean. Person on the far right is Wendy Lisogar-Cocchia, chair of The Vancouver Board of Trade. Photo taken at Clark's swearing in as premier, March 14, 2011.

A week later, Clark was accompanied by Mills, videographer Justin Schneider, senior policy advisor Jim Shepard, Hodge and the unnamed bodyguard for a $5,410.61 trip to Prince George and the Council of Forest Industries Convention.

Clark spent $3,803.32 for the charter to Kamloops where she announced a plan to increase international students on Sept. 20 at Thompson Rivers University. Jobs, Tourism and Innovation Minister Pat Bell, Garfinkel, Hodge, Olsen, chief of staff Mike McDonald and the bodyguard accompanied her.

On Oct. 15, Clark, her principal secretary Dimitri Pantazopoulos and the bodyguard flew to Dawson Creek and Fort St. John for a photo opportunity with Prime Minister Stephen Harper at Northern Lights College. That trip on a Cessna Citation Mustang cost $7,113.13.

Clark's most expensive excursion of 2011 was $19,468.77 for the June 20-22 Western Premiers' Conference in Yellowknife, N.W.T. Hodge, Pantazopoulos, assistant deputy minister Pierrette Maranda, and two undisclosed people, including the bodyguard, were passengers.

Blackcomb Aviation, which also serves the Ministry of Forests and B.C. Ambulance Service, was paid $2.2 million by taxpayers for the fiscal year ending March 31, 2011.