[Editor's note: Jude Isabella is filing reports from the meeting of the American Association for the Advancement of Science in Vancouver. Find her other posts in the Environment category of the Tyee's Hook news blog, here.]

Why the steep decline of Steller sea lions in Alaska? The answer is simple. Because they swim in a sea with the nutritional value of a field of celery. 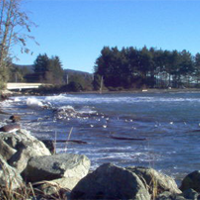 "What if I put you in a farmer's field and say, 'Look at how much celery is in this field, what do you mean you're hungry?' Sea lions are swimming in what I believe is a field of celery," says marine biologist Andrew Trites, a marine mammalogist with the University of British Columbia. His talk was part of a session called Historical Biocomplexity in the North Pacific Ocean: Lessons from the Past.

And to be Zen about it, that's neither good nor bad. The sea lions cope. They evolved to survive natural changes in the environment.

Trites has studied marine mammals for the past 30 years and in that time he's done a 180-degree turn in terms of finding out why marine mammal populations fluctuate so much.

"At first, I thought pretty obviously that it was the rise of industrial fisheries, and most of my grad students explore this as the explanation," Trites says. But maybe this is too short-term a window he's been looking at for so long, we need a longer time depth, he adds. "I think what we're seeing is part of natural changes, and what sea mammals have adapted to is red noise."

Red noise refers to the idea of random variability in the North Pacific system -- it's intrinsically unpredictable. The region is what one scientist calls the "chaotic" North Pacific. The sea lion has adapted to the "chaos."

The recent plummet in some marine mammals has been swift. In Alaska, Steller sea lions -- the males weigh in at 1,000 kilograms -- have declined 85 per cent since the late 1950s. The major breeding sites of harbour seals have dropped over 80 per cent, as have the numbers of northern fur seals.

Looking over the data, overfishing has had no significant impact on sea lion numbers. Nor are the Alaskan sea lions malnourished. Over in British Columbia, meanwhile, harbour seal numbers are up and holding steady. Sea otters are on the rise, as are the sea lions. The difference boils down to diet. Alaskan waters in the mid-1970s saw a build up of the pollock fishery. Pollock lack the fat sea lions need to cope with cold Pacific waters. They have to eat more than they can fit in their stomachs to get the same nutrient value they find in herring or sandlances, fish their B.C. cousins find more easily.

In studies, Trites and his colleagues fed sea lions a diet of herring, and then switched to pollock. The animals were allowed to eat as much as they wanted. (Apparently, like kids, once they start tossing their food and playing with it, they're done.) On a herring diet, the sea lions grew 0.2 kilograms a day. On a pollock diet, they lost half a kilogram a day.

It was so bad, Trites says, that the vet ordered them to stop feeding the sea lions pollock, even though that was what they ate in the wild. Two sea lions were losing so much weight, they had to be switched back to more nutritient-packed fish. So why did researchers never see starving sea lions in their natural setting?

In Alaska today, it's lean times and female sea lions can keep their pups a year or two longer than they would in good times. The result is a two-thirds drop in the birth rate since they don't give birth every year. And the females appear to spontaneously abort a fetus, probably when their fat levels are too low. In B.C. waters, it's better times and sea lion females are breeding annually and weaning pups earlier.

Based on his own research coupled with studies that look into the deep past (oral histories, climate research, and the archaeological record), Trites says these dramatic declines and increases in marine mammal populations have occurred in the past across the Pacific Rim in the absence of fisheries. North Pacific marine ecosystems may regularly shift to alternative states every 40 to 50 years.

Are humans off the hook? Not entirely. Fisheries and global warming may compound natural change and put marine mammals at risk, Trites says. B.C. has only three breeding locations, and while the population is going up, sea lions are sensitive to human disturbances. Currently, they're listed as a species of special concern by the Committee on the Status of Endangered Wildlife in Canada.

On an uplifting note, evidence from genetic studies shows that the Alaskan sea lions are moving east toward B.C. and interbreeding with their more numerous brethren. Love thy neighbor, a sound evolutionary tool.