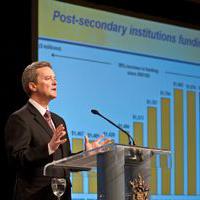 BC Budget Built on HST Revenues

NDP finance critic Bruce Ralston questioned whether a minister who has consistently supported the tax can do that. A look at the government's HST website shows he may have reason to worry.

People can judge for themselves whether the government has succeeded in putting together something neutral, he said. "If we tried to turn this into a sales job, the public reaction would boomerang and we'd get nowhere," he said. "I think we'll be judged on what kind of information campaign we run."

Something 'wrong' with PST

The television ads themselves appear neutral. They feature a stick person confused by the debate over whether the province should keep the HST or return to a system with a Provincial Sales Tax and a federal Goods and Services Tax.

"Decide for yourself," the ad tells viewers, providing an address for the HST in B.C. website.

It also includes information the government has been using for some time, some of which appears to support keeping the HST, and some which contradicts the panel's report.

Take for instance the series of frequently asked questions the website includes:

Taken together, the questions suggest there was something wrong with the PST, the HST is different, it was important for B.C. to adopt a value added tax like the HST, and the HST will create jobs. While Falcon would likely argue that it's true there was something wrong with the PST and it was important to adopt the HST, that position is not neutral.

Another page of the website looks at how the HST affects your family budget.

It quotes the independent panel's report: "Most households will see an increase in how much they are paying in sales taxes under the HST. The Independent Panel on the HST estimates that families will be paying, on average, an additional $350 in sales tax annually under the HST."

Scrolling down, it includes a graphic with four case studies showing how the HST affects different types of families who have different incomes. None of them will pay an additional amount as high as the $350 the panel identified as the average.

While that might explain some of the discrepancy, the report also provides figures for what the net increase, after rebates, should be for families in various income brackets. It defines "family" as one or more B.C. taxpayers, by the way.

The government's chart that appears on the website used data from Statistics Canada, and were not necessarily a straight comparison to what the independent panel found, said a finance ministry spokesperson, who allowed that the case studies may need to be revisited in light of the panel's report.

'Not a fair fight,' says critic

On hearing about the government's ad campaign, NDP finance critic Bruce Ralston said he was concerned a lot of public money would be spent on something that might not be fair.

Falcon, the minister of finance, has been an HST supporter, said Ralston. "It's very clear he has a point of view on the HST and he expresses it very strongly," he said. "My concern would be, given his views, whether that campaign would be fair."

"They've given the opponents of the HST $250,000, and they've given themselves almost $7 million," said Ralston. "You can tell by that disparity... that it's not a fair fight."

At that point, Ralston hadn't yet seen the government's ads, nor had a chance to look at the website to which it drives people. After seeing it on a reporter's smart phone, he said, "It's simple, I'll say that... It's catchy, but I'm not sure how that helps people make a decision."

The ad campaign may weight the result of the referendum, he said. "I guess the public will have to judge whether that's a good use of $5 million."

Falcon justified the ads saying, "As a minister of finance, I am going to make sure that before this campaign is over, I am not going to have British Columbians come to me complaining about the fact they made the decision on the basis of misinformation, wrong information or no information."

They too can decide whether the government's website meets that standard.