Imagine if a federal government employee tried to leak information to the public or media because he felt people needed to know what was being done in secret.

And imagine that the government silenced him with a court injunction that barred him from even speaking about the information or sharing it.

But tomorrow the Nisga’a Lisims government will be in B.C. Supreme Court. It’s already obtained a temporary gag order against former information technology manager Andre Cardinal, who alleged mismanagement by government officials. Now the government wants the court records sealed, including the affidavits filed to support the request for an injunction barring Cardinal from sharing his concerns.

The affair is an important issue for the Nisga’a people, who won back the right to self-government with the first modern treaty in B.C. in 2000. The four villages of the Nisga’a nation are located along the Nass River outside Terrace in northwestern B.C.

And it raises deeper questions around accountability and transparency for governments of other First Nations as treaties are signed. There are 65 First Nations across B.C. working — at least theoretically — towards self-government in the BC Treaty Commission process.

But almost 20 years later, democratic institutions, such as an independent press that reports on government business and acts as a check on government power, are still missing.

The case highlights the challenges for other First Nations as they move towards these hybrid governments.

How did this end up in court?

Cardinal considers himself a whistleblower. In his work as a senior manager with the Nisga’a Lisims government, he obtained information that he believed showed wrongdoing within the government and shared it with people in the community.

In May, the government went to court and obtained a temporary injunction that barred Cardinal from sharing the information, or even talking about what he had seen. Now the government wants the evidence from that hearing sealed.

Nisga’a government officials have held emergency meetings to discuss the matter, and how to deal with it. They’ve launched an investigation and gone to court.

And they’ve issued communiqués to Nisga’a citizens saying any information Cardinal sent them should be erased from their hard drives because it is privileged and confidential, and that the integrity of their government and employees has been compromised.

The effect has been to cloak apparently serious allegations in secrecy. The information has been shared with some people. Information — and misinformation — have almost certainly spread. But citizens as a whole still don’t know what the allegations are.

Nisga’a government officials know. Lawyers know. A B.C. Supreme Court justice knows. Clerks who type this stuff up for the courts know. I even have a good idea, after going to the courts and studying the file.

But Nisga’a citizens don’t know, the very people who elect officials and are impacted by their decisions are being kept in the dark.

A small grassroots protest demanding accountability from leaders on the issue was held outside the government office in Gitlaxt'aamiks last month. Nisga’a citizens have talked about the issue on Facebook. But so far secrecy remains the rule.

I sent questions to the government communications office, but haven’t received answers yet. No one wanted to comment for this story.

“The matter is before the courts, we have an investigation under way and our legislation prevents me from commenting right now,” says Gitlaxt'aamiks Village Government Chief Councillor Keith Tate. “It’s not appropriate for me to comment at this time. That’s where I stand.”

The government’s response is eerily similar to the paternalistic treatment of Indigenous people under the Indian Act. It assumes citizens won’t understand the information, or aims to shield officials from any fallout.

The treaty was supposed to allow citizens to escape that kind of treatment.

In the Nisga’a final agreement, the words open, transparent and accountable are used multiple times, as are democracy and democratic. It also says that Nisga’a governance is consistent with the principles of federal, provincial and municipal governments.

Those aren’t just words. They are the rules the Nisga’a government must follow.

To be fair, the Nisga’a have existed as a culturally distinct people along the Nass River for a millennium, but they have only existed as an independent self-governing nation for the last 19 years. They’re a young and evolving democracy. They had governed according to the federal Indian Act since its imposition in 1876, and councils weren’t required to be open, transparent or accountable. They couldn’t be expected to transform their approach in a short time.

But it’s been almost two decades since their final agreement came into effect. The retreat into secrecy shows not enough progress has been made.

One solution: a free press

The Nisga’a final agreement says “The Canadian Charter of Rights and Freedoms applies to Nisga’a Government in respect of all matters within its authority, bearing in mind the free and democratic nature of Nisga’a Government as set out in this Agreement.” The federal and provincial governments have maintained that adopting the Charter is a requirement for any new treaties.

And freedom of the press is among the Charter commitments.

Even in their shrunken circumstances, news media help ensure accountability in most governments. They provide whistleblowers with a safe place to take information and investigate and report on government activities.

This is partly because historically the Nisga’a didn’t have a media culture as we know it. A free press operated briefly in the Gitlaxt'aamiks, considered the informal capital of the nation. But without training and resources the attempt was short-lived and the publication ceased.

The press wasn’t part of the Nisga’a DNA, and as officials took on the monumental task of putting the treaty into effect establishing media-friendly infrastructure such as legislation that accommodated a free press was likely a lesser priority.

A Nisga’a free press wouldn’t be an arm of government. It would dispassionately report on the Nisga’a legislature and the nation’s village governments, and report about business that impacts citizens so they can make informed decisions. It would question Nisga’a officials about their decisions.

A free press would be a surrogate for Nisga’a citizens, many of whom live away from the nation, who can’t go to government meetings or who would benefit from independent reports analyzing and interpreting the government’s decisions and policies. 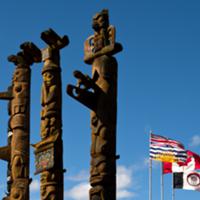 My Search to Understand Freedom of the Press in Indigenous Communities

I worked as a community newspaper reporter for almost eight years, and have seen the benefits of reporting on the business of the city council, regional district, school board and port authority. It’s not always exciting reporting, but it is important and necessary nonetheless.

Establishing a free press in a place where there is no media culture would be a challenge, but it’s not insurmountable.

Journalists for Human Rights, for example, operates a program that helps establish better journalism in post-conflict countries. Local journalists are trained to report on democracy, governance, health and education issues, as well as to act as a buffer and conduit between their governments and society. Trainers teach journalists how to report using conflict-sensitive language to get accurate, balanced and fair stories told in a way that doesn’t re-ignite tensions.

With that kind of support for a Nisga’a independent media outlet, stories like the Andre Cardinal allegations could be told, instead of being subject to court-ordered secrecy.