The latest kerfuffle over a writer making things up at the New York Times suggests we should rewrite Benjamin Disraeli's quip about the shades of falsehood to read: lies, damn lies, and newspaper copy.

The miscreant was media columnist Farhad Manjoo who, inexplicably, decided to do one of those digital detoxes that were all the rage with writers about six years ago. Or rather, he didn't do the detox but said he did.

Manjoo claimed that, for two months, he was reading only three daily newspapers-of-record in print while getting the balance of his general-interest news from other sources, including podcasts and newsletters. But he wrote that he had unplugged from Twitter and other social media.

"Basically, I was trying to slow-jam the news," Manjoo wrote. "I still wanted to be informed but was looking to formats that prized depth and accuracy over speed."

He waxed on about how giving up fast news was "life changing." He was better informed, he assured us. And it saved him time! Best of all he wasn't responding like Pavlov's dog-with-a-bell to every stray alert.

It's a lovely idea, isn't it? So he earned many enthusiastic thumbs up, particularly among the tech-resistant readers of a certain age who want to believe the word "newspaper" still means the same thing it did in 1975.

But it was only a lovely idea for about 48 hours. Right up until the Columbia Journalism Review posted a story under the headline: "Times tech columnist 'unplugged' from the Internet. Except he didn't."

It was obvious Manjoo had been using Twitter to get his news while it was still new. How did they know? Because he was retweeting the stories.

"...he tweeted nearly every day during the 58 days of the experiment," the CJR reported. "During the first two weeks of February, he tweeted, on average, more than 15 times a day."

Yikes. Even Trump averages only about six tweets a day while celebrating the "post-fact" world.

It's not clear if Manjoo is a compulsive tweeter, a compulsive liar, or just another example of the Dunning-Kruger Effect. I laughed and awaited the New York Times' mea culpa. Which, astonishingly, never came.

According to CJR, a Times spokesperson said, "The paper doesn't view his assertion as a falsehood, and won't be issuing a correction."

That kind of journalism, in a nutshell, is why I dumped my New York Times subscription more than a year ago. And why so many newspapers enjoy such a bad reputation. They are frequently, as Stephen Colbert would say, truthy.

Meanwhile, the National Post made what looks like an honest mistake: reprinting Manjoo's story before the CJR fact check was published. So now they're unreliable-by-association.

It may look like business-as-usual in newspaper land, but here's why you should care about this incident: when it comes to fake news, the problem isn't loony tabloid-style conspiracy stories. It isn't even once trustworthy media torquing stories for their own fun and profit.

The problem is you. And me. And every other reader. We believe things that are not true because we find them comforting.

It's safe to assume that Manjoo knew there would be no consequence for writing that fanciful crowd-pleaser because he wrote the book on fake news. Literally. In 2008.

Manjoo's book, True Enough: Learning to Live in a Post-Fact Society, echoed something researchers discovered about a century earlier: people will interpret facts to fit their own beliefs. A reviewer summed up Manjoo's central argument: "The vast majority of people want their beliefs to be reinforced, not challenged by inconvenient facts."

It's the secret to effective propaganda and why social media sites like Facebook are dedicated to scraping-and-selling psychographics: you have to know what people want to hear in order to manipulate them.

This is general knowledge in journalism, so I was amused to see how many of my old-hack pals who hate social media were singing the praises of Manjoo's piece, even after learning his piece was a lie.

"Saying he unplugged from Twitter was sloppy," one journalism instructor told me. "But that doesn't negate his main argument. He obviously changed his news consumption enough to notice a difference."

No. He did not change his news reading habits at all. He just tweeted a little less.

But I was amazed to see the research come to life. Here was a journalism instructor - someone who was supposedly trained to spot untruths over her long career - and she was justifying his fiction-masquerading-as-fact because it reflected her own beliefs.

Since I've written about the sorry state of news media for almost 20 years now, I'm often asked how average readers can improve their own media literacy. I usually reply that as the average reporter can't figure out what is trustworthy half the time, I have no advice to impart.

Still, Manjoo's foray into truthiness offers some insights into how to read the news, much of which is "true enough" as he would describe it, but not quite true enough for me. And possibly you.

First: avoid writers like Manjoo. He clearly does not think he was lying, which is worrisome all by itself. Or maybe he just has an excellent understanding of marketing? (I can never distinguish between those two.) Either way, this is a guy whose copy I will avoid.

Second: when it comes to general interest news, cast a wide net. I rarely tweet, but I make a daily foray into Twitter where I pull up hashtags on things I want to read about - #journalism, #propaganda, #ballet - and I get the day's news from everywhere.

I collect those links into a tablet reading app - I use Instapaper - and then I sit down and read them over coffee just as I have been reading at least three newspapers a day, all of my adult life.

Third: be wary of newspapers that have a history of playing fast and loose with the facts. The New York Times, for example, was the home of Jayson Blair and Judith Miller. They also reported that Hillary Clinton was a shoo-in for president. Later they blamed the data. 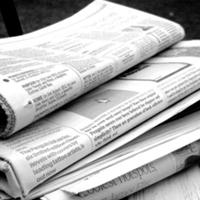 Fourth: read the views of people you disagree with, as long as they write well. Writing well is the key here. It's easy to dismiss the functionally illiterate. But how about reasonable people who can turn a phrase while making an argument with which you just happen to disagree?

I find it functions as a sort of intellectual palate cleanser. May I recommend Andrew Coyne? He's an elegant, witty writer and he will force you to consider the true meaning of words like conservative. (Trust me: it will do you good.)

Five: don't be a sucker for a brand. There may have been a time when the New York Times was objective in the proper sense of the word - testing things for accuracy - but as newspapers lay off more and more copy editors, I don't think we can trust any outlet all that much.

I know: it all sounds like a tremendous amount of work that recalls the old adage about the price of democracy being eternal vigilance. I'm sorry to be the bearer of bad news.

Then again, the virtue of writers who tell you things you don't want to hear is that there's a better than average chance that we're telling the truth.