As public frustration with the state of telecommunications services such as Internet access and wireless competition mounts, a relatively obscure government consultation on spectrum deserves far more attention. Last November, Industry Canada released a Consultation on a Policy and Technical Framework for the 700 MHz Band and Aspects Related to Commercial Mobile Spectrum. While the title alone is likely enough for most to look elsewhere, no issue will have a greater impact on the next 10 years of Canadian digital policy. 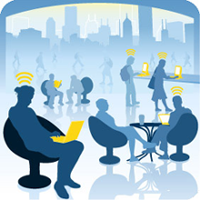 A Chance to Open up Canada's Wireless Market

The spectrum consultation is linked to this year's digital television transition as Canadian broadcasters will switch from analog to digital transmissions by Aug. 31, 2011. The move to digital has implications for broadcasting (some Canadians may be unable to access digital over-the-air signals), but the bigger policy issues stem from what happens to the spectrum that will be freed-up as part of the changeover.

This spectrum -- known as the 700 MHz spectrum -- opens up a host of possibilities for new innovation, competitors, and open Internet access. It is viewed as a particularly valuable spectrum since it easily penetrates walls, making it ideal for delivering wireless high-speed Internet services.

While some of the consultation focuses on technical issues such as whether Canada should mirror the U.S. approach in how it divides the spectrum (a matching approach would mean devices using the spectrum would be compatible in both countries), there are five critical policy questions that will have a big impact on the Canadian digital economy.

First, there are questions about who should be entitled to bid for the spectrum. Canada's last spectrum auction featured Canadian ownership requirements (now the subject of litigation involving Globalive), thereby limiting potential entrants. This auction provides a tailor-made opportunity to eliminate foreign ownership restrictions by opening the market to all bidders.

Second, the government has asked whether the auction should again feature a "set aside" that reserves certain spectrum for new entrants. The last spectrum auction included a set-aside, leading to a handful of new entrants such as Globalive, PublicMobile, and Mobilicity. A further set-aside may make sense since this round of new entrants may look to use the spectrum primarily for wireless broadband services, providing a potential alternative to the cable and telco dominance.

Third, the government asks if it should establish "open access" requirements, mandating certain openness standards in the use of this spectrum. For consumers tired of the "walled garden" approach of current providers that use both contracts and technology to lock-in consumers, open spectrum policies would spur new innovation and heightened competition by facilitating greater consumer mobility and promote the introduction of new services not tied to a single wireless provider.

Fourth, the government opens the door to allocating some spectrum for unlicensed purposes. Often referred to as "white spaces," this spectrum was previously used by broadcasters to ensure that their analog broadcasts did not interfere with one another. Today, the same spectrum could be used for new services without the need for licences or government regulation.

Fifth, though not part of the consultation document, a key question is what the government should do with the billions of dollars that will be generated by the auction. While the proceeds from the last auction went into general revenues, this auction represents the best -- perhaps only -- opportunity to access billions of non-tax dollars for the digital economy. The money could be used to support broadband initiatives, digital content creation and digital skills programs.

If Industry Minister Tony Clement gets this right, the next spectrum auction could provide the foundation for a more competitive Internet marketplace with new entrants, innovative wireless broadband services, and the funding to support digital economy programs.