On Monday night the award-winning documentary Gasland got a big bump in profile when it was aired on HBO. 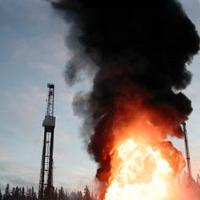 Sour Gas: The Smell of Money

The film exposes the major human health and environmental impacts of an extraction method used by the natural gas industry called hydraulic fracturing (or "fracking").

And by the looks of the PR attack campaign launched today, it looks like Gasland is starting to get under the skin of the oil and gas industry.

I guess the dinosaurs in the dirty fuel lobby don't like videos of people who can light their tap water on fire after their wells are contaminated with methane gas, like this:

Of course the gas companies say this is all perfectly natural and has nothing to do with their operations, but Gasland documents the many stories of people whose drinking water is just fine until the gas companies come along and start pumping all sorts of toxic chemicals into the ground in an extraction process called hydraulic fracking.

In fact, I have heard this same story for years and as far north as Alberta, Canada where ranchers who have had natural gas drilling operations forced on to their properties can now light their water on fire. Not to mention the chemical burns their children get in the shower or the water irrigation shed that blew up in a ball of flames.

Most of the PR push-back on Gasland appears to be coming from an oil and gas lobby group calling itself "Energy In Depth" whose anonymous website lists other oil and gas lobby groups, like American Exploration and Production Council, the Indiana Oil and Gas Association and the Texas Alliance of Energy Producers, as their members.

While the members of Energy in Depth might be listed, who is actually running the day-to-day operations and mounting the attack on Gasland is a bit of mystery.

An email that was forwarded to me gives a little further information on who's behind the PR push.

The email was sent by the Senior Public Affairs Representative for Anadarko Petroleum Corporation -- one of the world's largest independent oil and gas companies -- saying that the company is:

"actively engaged with groups like America's Natural Gas Alliance, Energy In Depth and the American Petroleum Institute to educate the public, government officials and other stakeholders about the errors in the film, and the truth about natural gas."

In public relations, it is always a bit of a tricky decision about when to begin countering your opponents' message. If you hit back too early, you may give the story "oxygen" and inflame a controversy that may have gone away if ignored. But if you wait too long to counter your opponent you risk jumping in too late and losing the war of words. The trick is to watch for the tipping point.

Looks like the tipping point for Gasland's opponents was last night's HBO screening, so watch out because we're all about to subjected to more spin than the teacup ride at Disneyland.