Sid Marty, the great poet and songster, told me of the quest he pursued on behalf of one of his sons, who lives in Edgewood, B.C.

At this historically inopportune moment, he’d run out of toilet paper.

Marty looked everywhere, gripped by the question Beavis put to Butt-head: “Heh heh. Do you have more TP? For my bunghole?”

Marty even ventured into Walmart, finding the shelves evacuated.

He left the store “just as a little troll was marching out, nearly invisible except for his shit-eating yuppie grin behind what proved to be the last bale of TP.”

My friend eventually discovered 12 precious rolls on a raided shelf in a Cranbrook drugstore for an outlandish sum of $16.00.

I can report that his son is safe now.

Canadians are in the throes of a pandemic-triggered run on loo paper. But we aren’t the only ones.

Australians have engaged in fist fights over remaining rolls in grocery stores with the energy of convicts. The police calmly explained to one pair of TP combatants that “it isn’t the Thunderdome. It isn’t Mad Max.”

In the interests of restoring public order, one Aussie newspaper proudly printed an extra eight pages “as emergency toilet paper” for souls with no rolls.

The toilet paper panic, a first in pandemic history (unsplintered paper didn’t come along till the 1930s), has also rattled consumers where the first sheets of perfumed paper were designed for the asses of Chinese emperors in 1391.

As people emptied shelves in Hong Kong a month ago, three anxious thieves even walked off with 600 rolls.  Fortunately, they were caught before they could use any.

I don’t think the hoarding has anything to do with evil intentions.

Maybe some people have gotten confused. COVID-19 infects the lungs not the bowels. But instead of washing their hands, many people are laser focused on their butts. It is a profound mix-up and, not good news really. But such things happen in pandemics.

Amidst our current panic, some psychologists have pondered the pull of TP.

“There is comfort in knowing that it’s there,” one told Time magazine. “We all eat and we all sleep and we all poop. It’s a basic need to take care of ourselves.”

Another psychologist said buying bales of toilet paper was “about 'taking back control' in a world where you feel out of control.”

I don’t know about that. Owning toilet paper has never made me feel in control of anything other than toilet paper, which is not a commodity I have ever sought to exercise much dominion over. 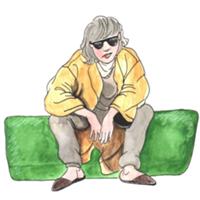 Working from Home, from a Writer Who’s Been There

Still, as another psychologist explained, when people “see photos of empty shelves,” they start imagining things and one thing leads to another.

Before you know it, you have truck full of toilet paper. Empty shelves will do that.

Let us wind down the hysteria. Let us take heed of the Los Angeles Times when it reassures “the fundamentals of our toilet paper pipeline remain strong.”

The 19th century writer Charles MacKay, author of Extraordinary Popular Delusions and the Madness of Crowds, once wrote that people “think in herds” and “go mad in herds.”

And then, “they only recover their senses slowly, one by one.”

Or, as they now say, one roll at a time.