Reading Cassandra Blanchard’s debut poetry collection Fresh Pack of Smokes feels like, to borrow a phrase from her work, someone “poured a bucket of blood” on your head. Such visceral images flood the pages of Blanchard’s autobiographical stories, pulling readers in with humanizing force.

Born in Whitehorse, Blanchard is from the Selkirk First Nation. Her work addresses Indigenous identity, same-sex relationships, and her family, but the focus is on the greater human experience, rather than the individuals. Mentions of her family life are kept short and powerful.

Her poem “Stars” describes her childhood experience, after her father’s death from a drug overdose when his “so-called friends” were too scared to call an ambulance. Another artist might centre their voice around such a defining, and deeply personal moment. But in “Stars” the event is over in an instant. Although mentions of Blanchard’s family are infrequent, when they do occur, the emotional impact is that much more powerful.

Throughout her work, Blanchard remains focused on her own feelings and experiences in an effort to retain the truth of her memories. She writes about life in Vancouver’s Downtown Eastside, where she lived hard and fast for years, with a galloping style that is both universal and understandable.

The images kick you in the chin and transport you instantly to the city’s seedy underbellies. Each poem feels like a sharp inhale followed by a stream-of-consciousness story, with images darting in and out like rats in the alley behind Vancouver’s Carnegie Centre.

Blanchard is a war correspondent for the most intimate of assaults: head, heart, body and spirit, yet there is a subtle humour in her observations. She reports on how it feels to be numbed out from the sex work that feeds her addiction and observes that it’s probably weird that it doesn’t bother her more (although sometimes it does). Her clients include mostly middle-aged married white men as well as “taxi drivers or stockbrokers, all kinds like the author of children’s books or the man who was a politician in Native self-government or probably your boyfriend or husband...”

There is no apology, and there shouldn’t be. She was surviving the whole time.

A few words into a poem and you are peering through Blanchard’s startled eyes, watching the police wreck your hard-earned high. Or listening to the too-quiet hallways of the Astoria where “the silence was terrifying” and there were “rooms where people seemed to never come out.” Paranoid drug-induced hallucinations are paired with the relief of getting a fix. Learning to enjoy coffee as a sober person lives in the same moment with endless drug cravings.

The pain of a romantic relationship with a brutally manipulative woman who pushed Blanchard into sex work to score drug money is contrasted with the loneliness of men who want to befriend sex workers. Love and longing saturate the pages of her book, alongside the idea that people can be both violent and desperate, but also kind.

Fresh Pack of Smokes is a book of straight-up power, plainly and directly spoken. It transmits the humanity of a transient lifestyle that many have observed, but few understand, with honesty and compassion. Blanchard’s perspective reinforces the idea that people on the fringes of society are often better positioned to understand the darker aspects of humanity. Her words echo out to the women she has met, “whose stories are important and whose lives are meaningful.”

Thanks to Blanchard’s poems and other work such as the Red Women Rising Report, the value and beauty of these survivors endures, demanding recognition and understanding. 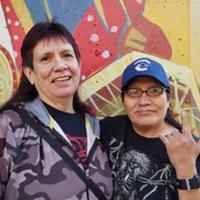 ‘I See My Sisters Hurting Down Here All the Time’: Indigenous Women in the Downtown Eastside Speak Out

In the beginning I had no real knowledge of drugs as they came into my life through a series of bad decisions and being in the wrong place at the wrong time — I look back and think of how naive I was; it all started with a panhandler, her name was Anna and I always gave her change and one day I sat beside her and that became a routine until someone else came by and she was a snaky manipulative thing called Jane. Soon we started hanging out and she cut up a line of crystal meth for us, I was a little drunk and snorted that up rather quickly as I thought it was crushed ecstasy, not jib, and the next couple days were spent snorting and drinking and hallucinating green army men on the mountains, I never smoked crack until a few months later as I realized that meth was destroying me like how jib was coming out of my pores or seeing shadow beings or rotting my mouth, so when a friend lit the pipe for me I was stupid and glad for it as the high was better even though I wanted more as soon as possible, so there it was the beginning of the long spiral down, sometimes I look back and think how dumb I was and how thorough this addiction was and that being too trusting and believing in the good in people was my downfall.

Fresh Pack of Smokes is out now via Nightwood Editions.