[Editor’s note: When writer Carissa Halton moved into an Alberta neighbourhood with a bad reputation, people worried for her safety. Nevertheless, Halton headed out to meet the neighbours and their stories. Though very different from her own, they showed her what Canada’s oldest neighbourhoods can teach us about relationship, safety, activism and the beauty in urban life. Threaded throughout 'Little Yellow House: Finding Community in a Changing Neighbourhood' are questions about the social and economic forces that shape and reshape our cities. She will be reading and signing books at Word Vancouver on Sunday, Sept. 30 at noon on the Suspension Bridge at the Central Branch of the Vancouver Public Library.]

It was that season again when the dark creeps into our evenings and steals the green from the trees. My husband Mat folded laundry downstairs, the girls ran around our house naked, and I was washing the dinner dishes when I heard breaking glass from the alley. The sound came again through the open patio door. Into the near-dark backyard I moved as fast as my pregnant body would allow towards the alley and saw a white, older-model Caravan idling behind my neighbour’s lot. Stepping out further, I spotted the source of the sound.

A short man with the belly of Santa Claus was dumping 20-litre pails of what sounded like glass onto the back lot of a newly built house. It had replaced a single-storey cottage that we had watched being dismantled first by its joists, then walls, then brick foundation. Most clearly I remember a gold-coloured refrigerator slumped in the front loader’s bucket, its cord so recently torn from a socket that it swung like a ticking pendulum.

When the demolition trucks left, only a low brick wall remained at the front, its wrought iron gate swung open over a cracking sidewalk that led to a hole strewn with insulation and migrating shreds of tar paper. Eventually a crew arrived with a truck whose highest point stretched taller than the elm trees on the boulevard. It emptied a steady stream of cement into the basement. 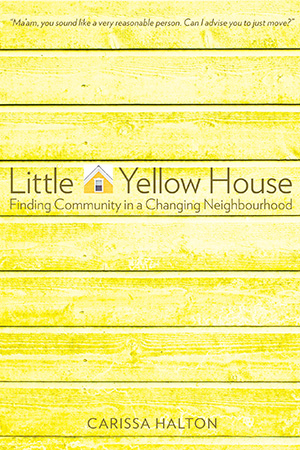 A new house rose along with a corresponding mound of garbage at the alley. There were blocks of rough concrete, broken glass and drywall mud buckets. Eventually someone added a microwave to the top of the pile. Its door opened with the wind to leer at traffic bumping slowly over alley potholes.

Anywhere in my city one can call 311 if such a garbage pile persists and, if I ever see a short, pot-bellied man with an unbuttoned Hawaiian shirt and crucifix on a gold chain emptying 20-litre buckets of glass in the back alley again, I will call 311. However, when I saw the man in the shadows dumping his garbage in my alley, I was pregnant and incapable of considering non-confrontational options like phone calls to friendly city bylaw officers.

“Excuse me?” I raised my voice. It had the inflection of a demand, not a request. He turned towards the truck, and grabbed another pail. Did he really just have the nerve to ignore me?

“Excuse me, sir!” I was yelling now. Moving, not yet charging, towards him so he could better hear me. “Sir, what are you doing?”

He finally turned and shrugged a non-verbal, What? This?

“Yes, why are you dumping glass in my back alley?”

“Oh, no, it’s not glass. This is tile. See?” He gestured for me to move closer to inspect the pile. His confidence that this mattered made my reaction so much worse: “Tile? How exactly is tile any different than glass? Can I tell you about the kids that ride their bikes back here? About the fact that my kids live 20 feet from a very attractive, climbable pile of garbage that now has not just glass, not just a microwave, not just huge bits of broken cement and rebar and who knows what else.”

I pointed to my home. “Kids live here.”

I pointed to my neighbours’ home, where the kids play video games inside 14 hours a day. “And there.”

I pointed to the home where five kids live with their grandma and somehow all fit in the cab of her rusted red truck. “And there are five more here.”

I pointed finally to a home where the Greek man died and which had been vacant for months: “And there. Kids live everywhere along this back alley and you want to come and bring your shit tiles and just add them the rest of this shit pile?”

His hands were raised in surrender, but I had no flashlight. I had no police back up. All I had was a raging righteousness partly inspired by the incredible estrogen and extra blood teeming through my veins. It felt so good that I kept going, and moving forward I ventured into sarcasm. “Sir, shall I draw you a map? Don’t you know where the landfill is? Because it’s actually outside of the city. This is the middle of the city. This is the middle of my bloody neighbourhood and I’m not going to let more of your not-glass-tiles get dumped on that pile where they become a 911 waiting to happen. Is that what you need, a map?”

“This is my boss’s house. He told me to just bring my tiles here. I’m working on one of his houses down on the east end.”

“Oh, your boss owns this house that is taking forever to finish? Well I’d like to talk to him because he is building this pile way faster than the house.”

It was about this time that my husband, Mat, heard the shrill sounds of a lady in what he thought was a drunken dispute. He paused to make sure no one was getting hurt, then he paused again to make sure he’d heard what he thought he’d heard. That lady was in fact his pregnant wife using a voice reserved only for the animals after they had tracked garden mud onto her new white chairs. He grabbed his flashlight and, followed by his daughters, marched out the patio doors, down the deck stairs, past the garage and out the back gate.

Tile Man suddenly found himself surrounded. Two blond, naked little girls in bare feet stared at him disapprovingly. Mat aimed a flashlight squarely at his license plate. Our neighbour and his dog were finishing their walk and came at him from behind. Then there was me still raving. It was at this time that his What, this? posture melted.

I sighed and hedged, “It’s a long story, girls.”

Mat suggested I explain that long story to them as they went to bed. It did not take me long to feel embarrassed at how loudly I swore and how confrontational I had been in public. However they did not accept my contrition. They took on my righteous anger and asked, “Mommy, can you believe he was making our neighbourhood ugly? Someone should talk to the police.”

As their questions and blinks slowed, a knock sounded on the front door and Mat left his post putting the dishes away to find Tile Man standing nervously on our deck. His accent drifted through the heat registers to the bedroom and the conversation’s tone was low, civil, level; occasionally, there was pleading. When Tile Man left, I rolled with zero decorum out of the narrow single bed where one kid was already asleep. On finding Mat I saw him roll his eyes before he recounted the conversation that started and ended with, “Please, please don’t call the government.”

The tiles remained on the pile that grew for another few months until finally a dump truck arrived, closely followed by a moving truck that emptied the belongings of a very quiet family into the brand-new, bland box of a house.