"Your eyeball might explode," Adam Barlev warned me for about the sixth time as he activated the laser cutter. I dutifully secured my safety glasses in case the cutter went akimbo. 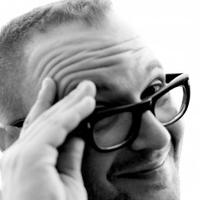 Our Future Remade by 'Maker Culture'

I was cramped in a small room with Barlev -- an artist and chemistry PhD student -- and a large Redsail laser cutter; a second hand piece of industrial equipment that resembles an '80s arcade cabinet.

Because of its retina-frying capacity, the cutter is sequestered in the back of the Vancouver Hack Space (VHS), a basement workshop on industrial land southeast of Science World.

I was lucky enough to get a demo from Barlev, a Hack Space member who uses VHS resources for creating what he calls "architectural origami," displayed at Burning Man, Luminara 2012 and California's Symbiosis Gathering.

The cutter's interior filled up with toxic smoke as an invisible infrared beam sliced diamond shapes out of sheets of corrugated plastic. Custom-built ventilating fans sucked the fumes out, cooling the rest of "the Bunker" -- the nickname for this space -- a few degrees in the process.

The VHS is often standing room only on open house nights like the one I visited, a testament to the organization's continued growth since it was founded in 2008.

Members are planning to celebrate that growth this weekend at the organization's fifth anniversary -- an important milestone, they say, for a group that started with little more than 20 hackers and now has roughly 200.

A labour of love

In Vancouver, the VHS provides space to create in a city of apartment and condo-dwellers who might not otherwise have room to do so. But for members, the organization is much more than just a workshop. It's a community, they say, and a seedbed for a revolution.

VHS is one of many such hack spaces that have spread across the continent in recent years. Proponents say they'll prove revolutionary by teaching ordinary people to take the means of production out of the hands of corporations and into their own.

VHS offers memberships starting at $25 a month that grant access to the Bunker and most of its equipment. Small electrical cords and parts, LEDs, circuit boards and other items are often available on a "take-it-if-you-need-it" basis, while a row of member-built 3D printers stand ready for use and training purposes.

In theory, anyway. A lot of the machinery wasn't in operation while I was there. Of the several 3D printers in the space, none were working. Like the laser cutter, the printers need "a lot of love," said member Andrew Milne as he carried the guts of one printer out for repair.

For an organization like VHS -- which bootstrapped itself purely on donations and member dues -- their tools can't be professionally maintained. But, despite the space being a bit rough around the edges, many VHS members I spoke to vehemently defended it as a great place to learn and share -- a testament to the passion for the work they do and the community they've helped to create. 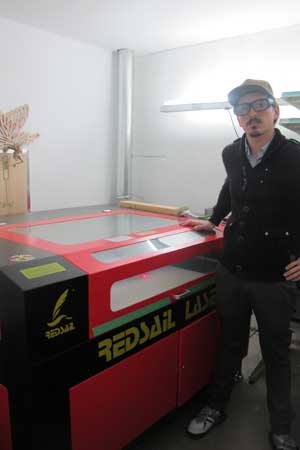 "The vast majority of stuff here is donated," said Barlev. "No one here is taking home a paycheck, no one is getting a stipend for maintaining the machines. There are one or two people who've done huge amounts of work to build the ventilation system for the laser, for example, out of their own pocket and their own time.

"It's really a labor of love," he said, adding that the main benefit of the laser cutter is to serve as an educational tool to teach people how to operate it, and what can go wrong -- not to do professional cuts on demand, for which people should go elsewhere.

As I walked around, I got a chance to survey the rest of the Bunker, which looks a lot like a cross between an electronics store and someone's garage with a LAN party going on inside.

Laptops rested flipped open on a long table covered with a creative clutter of projects in various states of assembly. I saw a pair of members working on a quadcopter drone, while father and son built their remote control buggy and three other members tested strings of LEDs left over from a Burning Man display.

One VHS director, Dan Royer, tinkered with his Stewart platform -- a platform designed to tilt flight simulator seats and help orbital spacecraft dock. Royer's device was part of a homemade flight simulation rig he was designing, which would include a virtual reality helmet and a custom-made barf bag, he said.

A big yellow van parked in the Bunker's loading dock -- the Maker Mobile, as it's called -- makes the VHS its Batcave, for the time being.

The van is a mobile workshop, with interior workbenches, basic tools, a soldering iron and stations for computers, said Farrell Segall, one of four teachers who retrofitted the van as part of a budding social equity venture. The teachers work to provide a mobile work, hack and arts and crafts space for libraries, schools and community centers to help kids learn the joy of making, hacking and computing for themselves.

Segall expressed frustration that he wasn't able to get training on the VHS's laser cutter when he needed it. But he still showed me a prototype of the bookshelves he'd like to distribute to schools as part of the Maker Mobile's partnership with the Wonder of Reading campaign. Segments of shelf cut by the VHS's laser cutter are designed to be easily assembled later by students, who get to keep their creation.

Back inside the Bunker, I encountered an arcade cabinet plastered with an Occupy Wall Street bumper sticker reading, "We are the 99 per cent," a hacker poster, and another bearing a quote from Bob Dylan. It's this blend of the arts and crafts movement, cyberculture and left wing activism that gives the VHS its unique feel.

"Occupy Wall Street identified a problem: that shit's fucked up," said Emily Smith, a VHS member and the 29-year-old founder of the Vancouver Mini Maker Faire and the fair's host organization, the Vancouver Maker Foundation.

VHS, like the Maker Faire movement, "is a very democratizing sort of community," said Smith.

"A lot of it's about voiding our warranty. If you can open it you don't own it. It's about taking ownership of the things we consume and not being afraid to modify the everyday world."

Hackers still form the core contingent of the VHS, as evidenced by the pirate flags that adorn the space's walls -- relics from earlier hacker conferences. The hackers of VHS operate like an open source movement but for the physical products we often unthinkingly consume. They take what's cheap, broken or otherwise obsolete and give it new life, breaking open the "box" of devices to modify them beyond the manufacturer's intent.

But the VHS also offers opportunities to fraternize with other breeds of tinkerers whose numbers include people like Barlev: a mix of Burning Man attendees, commercial crafters, Do-it-Yourself (DIY) folks, arts and crafts enthusiasts and plain old hobbyists.

Many VHS members identify as "Makers" -- an umbrella term for people dedicated to challenging the production and consumption status quo. Their interests stretch beyond electronics to things like aquaponics, arts and crafts, farming, sustainability and education.

"I think we just need to go about ingraining these changes in our lives. It's more about the day to day life and how you can, as an active citizen, change your life," said Smith. "I see the Maker movement as an opportunity to have a voice."

Except, unlike the Occupy movement, "which kinda got angry, then lost its focus," she added, "the Maker movement is just more fun."

VHS provides one space that the Maker movement calls home, and as a result it has created a diverse atmosphere where people can work side-by-side soldering circuit boards while others sew.

"When we first started doing craft nights, that was really a departure from what was really computer hacking and hardware hacking. And we were like, you know, people are doing really rad DIY stuff with crafting," said another VHS veteran, Ryan "Goldfish" Smith.

"We hosted this amazing modular origami night and it was just about paper folding and math. And it was awesome, and that's something that obviously appealed to the group that was already existing," he said.

"There's more and more of those crossovers. We've got a craft section and sewing machines now."

Smith, known around here as a "greybeard," helped found the VHS and has stuck with the organization since it first met five years ago in the Hackery, a computer repair and recycling shop on Victoria Drive. With his wispy beard and black hoodie, the late-30-something resembles Obi-Wan Kenobi in skater drag.

Smith said that the VHS has now nearly reached the "promised land" of his original vision. As we spoke, we sat on a pair of comfortable leather couches parked on a plot of astroturf in a quiet corner of the Bunker. We had space to sprawl luxuriously, if we so chose. Before, the VHS was crammed into cluttered areas little bigger than a garage, Smith told me.

Since 2011, VHS occupied a place in a Downtown Eastside alleyway behind Save on Meats market, before finally transferring to their current address at East First Avenue in August of this year. The VHS has had to decamp twice in the last five years as it's grown steadily in size.

Despite the lack of room, the space had its charm, said Smith about the Downtown Eastside workshop. "It kinda jived a lot with the core principles that still kinda hold together a lot of the ideas that drive VHS. And that's why we're a little more non-hierarchical in nature. It's a community, everyone's involved in that, and that concept is foreign to a lot of people."

VHS still makes decisions by member votes. There are usually around seven directors but these positions are fluid, disappearing and appearing as needed with ordinary members answering emails and responding to media contacts on behalf of the organization where necessary.

"Just this space is a challenge to the status quo in general," said Smith.

"People who get sketched out by VHS generally have more of an issue with how VHS is run. We've had lots of people who come in who are a little more privileged who see that there is no boss and try to take that role and boss people around."

Maker culture is a key part of what VHS is, he added. "It's about making things and repairing things. It's about empowering people to make things and learn to fix things and not be afraid to experiment with things."