Here's how to nab one of seven 'group passes' to TATTOOS AND SCRIMSHAW: The Art of the Sailor:

Bring your tattoo'ed sailor grandpa, or the friend you got those (regrettable?) tattoos with when you were 19.

If Grade Four was the last time you went to Vancouver's Maritime Museum, you're in for a refreshing treat. Whether you're interested in tattooing culture, maritime culture or both, this exhibit will inform and entertain.

For more info, and to enter the contest, click here. 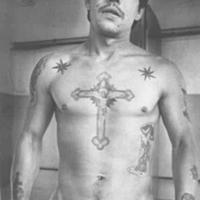 How to Read Prison Tattoos

At first glance, Chris Hold and the Vancouver Maritime Museum may seem an unlikely pair. Having received his first tattoo at the age of 18, the 36-year-old has since amassed a healthy collection: a kewpie mermaid, a bullfighter, a rose -- visual reminders of places visited, as well as a representation of the work of influential artists from around the world. However, Hold is also a tattoo artist himself, and as such, has donated a considerable amount of artwork, equipment and expertise to the museum's latest exhibit, one which explores the best-known of the maritime arts: tattoo and scrimshaw.

"Without sailors, I really don't think tattooing would be what it is today," Hold explains. "It's a tradition that will probably never go away. And we as tattooers survived on the sailor's fascination with tattoo images, and a lot of those images were created just for them -- tailor-made for particular divisions and particular occupations within a ship. It was pretty co-dependent."

The exhibit, due to open March 14, also features contemporary photography, illustrations, equipment, tattoo "flash", and dozens of pieces of scrimshaw (engravings made on whalebone) carved by generations of scrimshanders. All of which serves to illuminate the unique connection between these vastly different art forms, and the seafarers with whom they are linked.

"There was a rhyme to the reason," says Patricia Owen, the museum's curator. "Tattoos for sailors were like a code for a select group. You could look at another sailor, and you could know where they'd travelled."

For early sailors, Hold notes, a tattoo was as much an identity statement as it was a description of achievements and places visited: a single anchor to denote passage across the Pacific, a dragon to indicate time spent in the Orient. A palm tree to show service in Hawaii. Crossed anchors indicated that the sailor was a boatswain or a boatswain's mate, while crossed cannons signified service in the navy. And, although "sailor" tattoos evolved and rose to prominence in the North America of the 20th century, both Owen and Hold are quick to note that the practice has existed for thousands of years.

"Tattooing has existed in all areas of the world for a very long time," explains Owen, who wrote her master's thesis on Haida tattoos. "The idea of marking on the body isn't something new. The connotations in western society -- especially in the olden days, were negative. It's written in the bible in a negative context.... It was associated with prisoners or deviant behaviours. But in various indigenous cultures of the world, it was revered. It was seen as a form of beauty, or status, or cultural identity."

"It's always been practiced, since prehistory," Hold notes. "People have been poking each other with sticks with charcoal on them for 5,000-plus years.... It's been used punitively, it's been used as tribal marking -- there are so many applications."

Though it was often historically treated as an unsavoury practice (The Book of Leviticus, for example, sternly prohibits the marking of the flesh), tattooing has been practiced for more than 7,000 years, on everyone from unwilling prisoners, to sailors, to royalty, to members of Europe's upper class. Otzi the Iceman, Europe's oldest natural human mummy (dating from at least 5300 BCE), bears a number of distinct tattoo markings. Polynesian cultures, New Zealand's Maori in particular, would bear elaborate markings on their faces and bodies which gave information on genealogy and family affiliation. However, the the art form had all but disappeared in Europe by the 18th century, until the voyages of James Cook brought it back to national prominence. 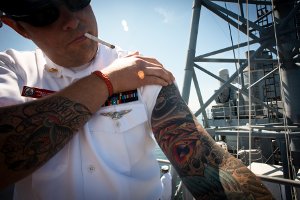 Current day sailor sports tattoo with links back to elaborate markings of Polynesian cultures encountered by Captain Cook. Photo: Kathryn Mussallem (from Maritime Museum Exhibit 'The Art of the Sailor').

"Both sexes paint their Bodys, Tattow, as it is called in their Language," Cook wrote in July of 1769, observing the practice in Tahiti. "This is done by inlaying the Colour of Black under their skins, in such a manner as to be indelible... As this is a painful operation, especially the Tattowing of their Buttocks, it is performed but once in their Lifetimes."

Cook's fascination with the practice -- not to mention the fact that his botanist Joseph Banks returned with a tattoo of his own -- touched off a minor frenzy amongst Europe's upper class; King George V, Kaiser Wilhelm II, and later Winston Churchill are all said to have sported tattoos of varying degrees of complexity. In fact, it is a result of Cook's voyage that the word "tattoo" exists in the West at all -- derived from the Tahitian "tatau." From there, tattooing made its leap to the United States (the first recorded instance of the practice is during the Civil War), where it remained closely linked with both sailors and the sea. The typical "sailor" tattoo -- now a common sight on everything from t-shirts to running shoes to overproof rum, had its beginnings in the U.S. Marine culture of the mid-20th Century, its distinctive style pioneered by such prominent artists as August "Cap" Coleman and Franklin Paul Rogers. And, as Hold explains, the evolution of the distinctive "sailor" style was as much practical as it was artistic. 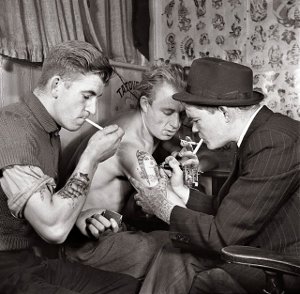 "When you think about it, if you're a tattooer, and you've got a 100 guys lined up outside of your shop, and you open up at 2 o'clock in the afternoon, you want to get through those designs quickly," he says. "Those guys don't really want to spend eight hours getting a tattoo -- they only have time to spend half an hour or an hour.... When these guys were getting tattoos, there weren't a million colours. There was black, red, green, maybe brown or purple. Yellow, sometimes.... You'd keep the colour-palette simple, the line-work would be straightforward."

The practice remained on society's fringes into the 1940s and '50s, even being outlawed in Coleman's hometown of Norfolk, Virginia. However, amongst sailors and members of the merchant marine, thanks in large part to the work of Hawaii-based artist Norman "Sailor Jerry" Collins, it continued to evolve and flourish.

"Tattoos, for a lot of those guys, represented the exotic," Hold continues. "So many of them were from the Central U.S. or farm towns, and there might be 14, or 15, or 18 of them going to the coast for the very first time and shipping out, and that was a marker of this huge event in their lives. If you went to a port -- say Hong Kong or something, it was this thing that you got almost on another planet. It represents something so unusual and foreign, but at the same time, it was a bonding experience between these guys that had a shared life on the boat."

However, while the versatile nature of tattoo allowed it to develop in many cultures and regions worldwide, scrimshaw, its lesser-known counterpart, is unmistakably a byproduct of a specific place and time, born out of the excesses of the commercial whaling industry.

"Scrimshaw was definitely an art form that came out of idle hands," Owen explains. "You had nothing to do, so let's carve on this material that we have a whole bunch of. But it was just as much about group identity. Only sailors would tattoo, and only the whalers would do scrimshaw."

Not surprisingly, scrimshaw tends to have a heavy nautical influence; carved directly into whalebone, and stained using anything from tobacco to candle black, the images largely feature ships, waves and mariners. By Owen's estimation, the Maritime Museum's collection (all made from whale teeth) ranges from the early 20th century to more current "kitschy" tourist fare. While the practice has declined significantly over the past few decades, (owing to changing attitudes, trade restrictions and a worldwide moratorium on commercial whaling), she notes that the art form hasn't completely disappeared. 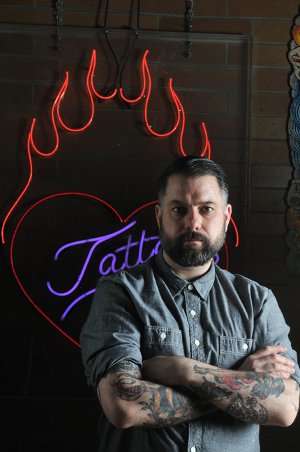 "Apparently, it does still happen," Owen notes. "It's not with whale tooth anymore. There are different types of ivory or bone. I've heard that cow bone sometimes gets used. We've been in contact with this gentleman up in lake country B.C, Ernst Oslender, who is a scrimshander, and ironically, none of his scrimshaw has anything to do with the sea.... And in Hawaii, apparently, there's quite a community that still does scrimshaw. Contemporary scrimshaw, and they sell it -- though I question what would happen if you try and get it across the border."

While scrimshaw's influence has declined amongst all but the most committed of artisans, tattoo's influence continued to increase throughout the latter half of the 20th century. Thanks to "Sailor Jerry" protege Don Ed Hardy, nautical tattoo designs can now be found on everything from t-shirts, to running shoes, to bottles of rum. And today, as Hold notes with pride -- particularly in port cities such as Vancouver and San Francisco -- after years of having been relegated to the fringes of society, the practice at last appears to have returned to the mainstream.

"I'll tattoo an 88-year-old grandmother, and then tattoo an 18-year-old kid," he chuckles. "There's really no 'type' of person that gets tattooed, and I love that it's reverted back to it being a more universal art. Humanity's always decorated itself, whether it's with jewellery, or coal makeup, or whatever it might be, and I think it's an anomaly in history that tattooing was seen as something derelict. For awhile there, it was the stuff of royalty."

Tattoos and Scrimshaw: Art of the Sailor runs Monday-Saturday, between March 14 and Oct. 13, at the Vancouver Maritime Museum. For additional information, call (604) 257-8300, or visit www.vancouvermaritimemuseum.com. Win group passes by entering our contest here.