It was a turning of the tables that caught the RCMP off-guard.

On Saturday I boarded a pastel blue school bus with 30 seniors from Victoria who call themselves Elders for Ancient Trees. They let me come along as a member of the media, paying my way, to observe their mission to the old-growth standoff at Fairy Creek.

Upon arrival, the elders presented excerpts of court judgments to the RCMP affirming the right to public access and peaceful protest in the Vancouver Island wilderness area.

After hours of to and fro, the seniors finally breached the line of exclusion set up by police on Gordon River Road and declared the day's action a victory.

For the last 10 weeks, police have been presenting injunction papers to forest defenders, arresting 500 to date as the activists pushed back with a series of moving blockades to stop clear-cut logging.

But the RCMP have also prevented law-abiding citizens, some wanting to observe or protest at Fairy Creek, or just to visit the old-growth forests, to access the area. On June 15, a busload of senior citizens organized by the elders to peacefully protest the arrest of forest defenders was turned away by police on the Gordon River Road and forced to back down the steep logging road in a driving rain.

The year-long campaign at Fairy Creek is defining a generation of activists who consider deforestation an existential threat as long-predicted climate change unfolds around us with scorching temperatures, devastating wildfires and floods.

The elected and hereditary Chiefs of the Pacheedaht First Nation, on whose traditional territory the disputed lands lie, have asked the protesters to leave, and the Pacheedaht, Ditidaht and Huu-ay-aht First Nations have deferred old-growth logging for two years in much of the Fairy Creek area. But the protesters calling themselves the Rainforest Flying Squad say they will continue because the deferrals don’t protect enough remaining old growth.

The Elders for Ancient Trees say they are taking their lead from respected Pacheedaht Elder Bill Jones.

"Bill Jones welcomed forest defenders to his territory and gave us the recognition needed to work on his ancestral family lands," said Saul Arbess, a leader of Elders for Ancient Trees.

On Saturday, he and other elders stood before Const. Tom Kinson, who refused to accept documents referring to two court decisions which ruled in favour of public access to Fairy Creek, as police behind him were manning a blockade the Supreme Court has ruled to be unjustified.

The seniors, some in their 80s and carrying walking sticks, stood in line in the blazing sun, amid a crush of protesters and media, and made their case verbally one at a time as they presented the documents to Kinson.

"I'm here to assert my right to public access," Cory Greenless said. "I'm disappointed and angry to be denied this right."

Kinson insisted that despite the court orders, no one would be allowed into the area where police were struggling with forest protectors blocking the road. The RCMP later announced they arrested 16 people on Saturday.

But the elders held the line and continued to demand access, singing protest songs between bouts of negotiation with the RCMP.

The story from the police kept changing as officers conferred with their superiors. At one point no one was allowed through, then only people on foot without their vehicles, not possible for some seniors.

A group of about 100 younger activists, who had invited the elders to a picnic on the Gordon River Bridge, were gathered near the blue bus. Some of them hoped to cross the line with the elders and grew impatient when the RCMP kept the exclusion zone closed.

When the young activists confronted the RCMP, a skirmish broke out and police wrestled with protesters, three officers grappling with one man, then spinning him away from the struggle and allowing him to run free.

Finally, after four hours, the elders' bus was granted passage by police for a two-hour visit to Avatar Grove, an iconic patch of protected old-growth further up Gordon River Road.

RCMP vehicles were moved to the side and onlookers cheered as the blue Community Action Bus, decorated with bears and salmon, climbed up the road. 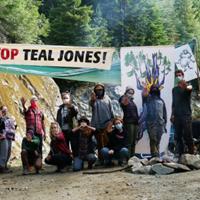 The access was limited under escort by the RCMP's Division Liaison Team, but the seniors were elated as they celebrated amid the towering stands of Douglas fir and red cedar that served as a living example of the struggle over old-growth logging.

"It was a win," said Arbess. "We kept persevering, buttressed all the time by the legal argument."

In a valley at Avatar, I sat on a bench beside a giant, burled cedar, perhaps the biggest I've ever seen, wondering how anyone could push the blade of a chainsaw into the trunk of such a magnificent tree, likely over 1,000 years old. 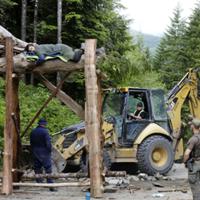 At the defenders' headquarters camp, we watched the preparation of a dinner for up to 200 people, a chef named Knives mixing a pile of white radish into a salad. The forest protectors received gifts of food from the elders, varying from bags of rice and pasta to a cake decorated with whipped cream and blueberries.

Then the seniors climbed onto the bus for the trip back home, the first hour on bumpy logging roads, to complete a 14-hour day of activism.

On the ride I heard members of the Elders for Ancient Trees wonder how they might be of further help in ending clear-cut logging of the old-growth forests.

Members said they would like to explore with the Pacheedaht what it might take to shift to non-extractive employment for Indigenous people and others as forest guardians or in the tourist sector, buoyed in the region in recent years by visitors drawn to the old-growth forests.

"This would be a positive outcome regarding the future of these lands negotiated with the First Nation," Arbess said of what is, for now, more a vision than a proposal by the Elders for Ancient Trees. The seniors have yet to have that conversation with the Pacheedaht Chief and council.