I make here a simple plea to the city’s decision-makers. Improve upon but don’t give up on the big idea you rejected. It holds too much promise to ignore.

By a vote of 7-3 council nixed a request to staff to report back with a density bonusing strategy that only non-profit housing providers could benefit from.

There were some reasons to kill the motion, which I’ll get to below. But it also contained good concepts that were smothered in the outcry.

The goal was to incentivize construction of new affordable housing — housing that would be permanently protected from the ravages of Vancouver's zooming land price acceleration.

All at no cost to the taxpayer.

The secret sauce was this. By only providing new density to non-profits, the change would presumably not inflate the land price of subject or adjoining parcels. Thus, the non-profits effectively got the additional land value for free, making it possible for their projects to "pencil out" at average rental rates that would start below market and stay there.

Counterintuitively it does not help much or at all to grant new density for market rate development, in the hopes that new density will dilute the "land price component" of the purchase price.

This is because as soon as the city even hints that new density will be allowed at some future date, land values skyrocket, often years ahead of tabling a rezoning proposal.

Take the example of nine properties on Clive Avenue near Joyce Station. They are being offered at three times their assessed value. Why? As the Georgia Straight points out:

"It may be recalled that city council on Feb. 25, 2020 approved a rezoning application on the street. The application was filed by DYS Architecture on behalf of Nexst Clive Development Ltd. to rezone 3235-3261 Clive Avenue. The development involves a six-storey building fronting Vanness Avenue, and three-and-a-half storey townhouses fronting Clive Avenue."

Note that the parcels now for sale are not part of the Clive Developments project, nor is there a proposal for them to be rezoned. Any new zoning allowance for these parcels is thus years away — and years away from any presumed "land lift" value increases which would be subject to the community amenity contributions, or CAC, tax.

So, no, it does not drive down the cost of housing when you add allowable density. It just puts millions in the pockets of the lucky land speculators smart enough to squat on probable future development sites.

Unless the new density is restricted to non-market non-profit housing providers whose goal is to provide deeply affordable housing. Then the land speculators will be very disappointed. This is because the non-profit housing providers won't be able to afford the "inflated by 300 per cent" land price the speculators hunger for and still make their projects “pencil out” with the expected affordable rents.

Non-profits can't afford the higher price because the lower rents they must charge won't cover this higher land cost. Land speculators might hope for a market rate developer to come along and pay the higher price; but remember that the for-profits are not granted the additional density. Only the non-profits. So, the for-profits would go broke paying the inflated land price, as under existing zoning they would have far less product to rent or sell at project completion.

Now let me be very clear. In my opinion the motion was badly worded as if designed to fail. Implying that 12-storey buildings might be a good idea everywhere in the city was not a crowd pleaser. And it was a bad move to give the impression that the public hearing on zone changes would be eliminated. Citizens rightly worried they might have no chance for neighbourhood comment.

Nor was it politic to let stand the current, awful definition of social housing. The motion accepted that it’s a social housing project even if 70 per cent of units are market rate because these high rents can cross subsidize the 30 per cent lower rents. Proponents of the motion rejected last week argued that this was a minimum threshold and that subsidies could be deeper. But opponents worried about inflating land prices were understandably not buying it. At 70 per cent market rate and only 30 per cent housing income limit rate, (which are essentially just below average market rate and thus no great deal), opponents argued that at these levels land prices would actually inflate. Most of those who spoke in opposition argued that affordable housing was needed but that this kind of housing didn’t qualify as “affordable.” I agree.

In Vancouver our definition of social housing must change and in that context we must come up with a zoning strategy that can achieve deeper affordability than having just 30 per cent of units be affordable as the threshold now requires.

We must come up with a definition that can stabilize or even drive down the price of development land because it is land price that is the problem here.

The city can and must redefine social housing to insist on much deeper levels of affordability for the very purpose of lowering land costs — an effective strategy recently demonstrated by the Cambridge, Massachusetts city council.

A demand for deeper affordability will exert a deflationary effect on land price for co-ops and non-profits. The name of this game in planning circles is “benefit zoning."

Benefit zoning streams gains that otherwise would have gone into the pockets of land speculators into affordable homes for those who need them most: our crucial service workers, now being priced out of our city in the thousands.

Mayor Kennedy Stewart is one who voted for the motion. But he seems to have learned the wrong lesson from its defeat. Instead of making a renewed, better case for the policy he supported and working the kinks out of the failed motion, he seems to have abandoned the concept altogether. 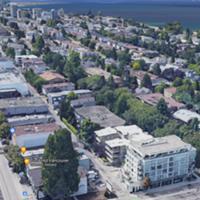 Instead he apparently wants to make his campaign issue going full speed ahead with density up-zoning for market rate rentals across the city. That’s how I read this survey appeal signed by Stewart.

Market rental units will inflate land values just as high as condo projects, and market rents will rise as a result. This is no steps forward and ten steps back.

This new citywide rezoning proposal will delight the land speculators, and make our housing crisis worse. Rents of more than $3,000 a month for a two-bedroom apartment will do nothing at all to house the service workers and artisans, many of whom are in our own families. These are people who make this city run and make it worth living here. They are owed another try, a better try, at the creative approach council was asked to consider two weeks ago and shot down.