The coronavirus has undergone another mutation, this time political. In addition to all its other miseries, the virus has morphed into the Great Canadian Blame Game. Sadly, this sorry spectacle will go on until an election is finally called.

Despite what they may think, this approach is a losing proposition for the official Opposition. It is also bad for those Canadian premiers who want to capitalize on a global catastrophe.

Some of them have attacked the federal government for alleged incompetence, the better to deflect from their own poor records in dealing with COVID-19. It pays to remember that the provinces, not Ottawa, lay down the policies on fighting the pandemic that affect the daily lives of their residents.

Not that Team Trudeau hasn’t made missteps — as has almost every country in the world. In the early days, few countries appreciated the dire threat of COVID-19. By the time they did, they were in a desperate fight against the pandemic without the necessary tools. Slowness off the mark in vaccine procurement is Ottawa’s principal sin in this matter. One day, as this country prepares itself for the Next One, a lot of things will need to be examined.

There was the CanSino deal for Chinese vaccine that fell through.

There was slowness in closing borders and restricting air travel from COVID-19 hot spots.

Why was vaccine supply so slow and unpredictable?

Why didn’t Canada have the capability to make vaccine domestically, in view of previous battles with the H1N1 and other viruses? As the auditor general reported to Parliament, the Public Health Agency of Canada was unprepared for the pandemic, despite 20 years of warnings, planning and spending for that inevitability.

Why didn’t the federal government take full control of the rollout of the vaccination program by declaring COVID-19 to be a national emergency?

For all of these reasons, Conservative Party of Canada Leader Erin O’Toole is promising a public inquiry into the government’s COVID-19 response, should he be PM after the next election. That is highly unlikely.

The trouble is not in asking the questions. Every rational, democratic society needs to inquire into a tragedy as epic as this pandemic. And it’s not so much to lay blame, as to apply lessons learned. That will save lives in future pandemics.

The trouble is asking those questions smack in the middle of a deadly third wave of the virus — and supplying dubious answers that don’t hold water. Premature postmortems only add to the problem everyone faces with the coronavirus and its variants.

But the Conservative leader would do better to put his shoulder to the wheel of fighting the third wave, and worry about the court-martial of those responsible later. Poking a stick in the spokes while the battle rages is smallminded, unhelpful and transparently opportunistic.

And it is worse than that.

O’Toole’s comments that PM Trudeau was “playing” with people’s lives, “leaving people behind” and running “social experiments” during a pandemic are patently absurd. The recent budget, which O’Toole rejected, was all about making sure that as many people as possible get through this disastrous disease, both from a public health and an economic point of view.

And then there is the man you never hear Erin O’Toole criticizing about his pandemic response. With almost 500,000 cases and 8,300 now dead from COVID-19 in Ontario, Premier Doug Ford is deservedly on the hot seat. That’s why he too is trying to deflect blame from his government’s handling of the pandemic to Trudeau.

Ontario is a hot mess, and Ford is a big part of the reason. Demanding that Ottawa tighten the border and impose travel restrictions is merely the premier’s latest ruse to have people forget his abysmal record as a COVID-19 fighter.

It was Premier Ford who recently approved the arrival of 30,000 foreign students in Ontario. How’s that for travel restrictions? It was Doug Ford who ignored advice on asymptomatic testing. And it is the Ford government that is responsible for Ontario’s shameful record of deaths in the province’s long-term care facilities, some of them due to hideous neglect.

As of this past March, there were 3,745 COVID-related deaths in Ontario’s long-term care facilities. The for-profit operations had the worst record. Green Party Leader Annamie Paul had it right when she recently said that the situation in Ontario amounted to “senocide” — the flagrant “abandonment of the elderly.”

And then there is Premier Jason Kenney, who once accused Ottawa of forbidding Apple and Google from working directly with Alberta to improve its COVID-19 tracing app. This from the same premier who emulated Dr. Donald Trump more than Dr. Anthony Fauci in the critical early days of the pandemic. Like Trump, Kenney compared COVID-19 to the flu. Like Trump, he downplayed the deadly threat. And Kenney scoffed at other province’s restrictions aimed at containing the virus.

The result? A misinformed public. Hundreds of maskless revelers recently attended an anti-lockdown rodeo in Alberta to protest COVID-19 restrictions. Though it is true that Kenney rebuked them, it was Kenney who originally led them to believe that “Yeehaw” was a policy statement. Not in a pandemic it isn’t.

And where has Kenney’s hapless conservative populism landed him? Eighteen members of his own caucus have dissed their leader publicly, the provincial legislature is in pandemic-related lockdown, and Alberta sports the highest per capita COVID-19 infection rate in North America. “All hat and no cattle,” is the traditional Texas put-down. “No hat and no cattle, and soon, perhaps, no horse” better sums up this feckless refugee from the former Harper government.

On May 13, Alberta MLA Todd Loewen stepped down as head of the UCP caucus and called on Kenney to resign. He wrote in an early morning post on Facebook: “Many Albertans, including myself, no longer have confidence in your leadership.” Loewen was one of the 18 backbenchers who broke with Kenney in early April over health-care restrictions aimed at reducing the spread of COVID-19.

As a political dust storm is raised over who is to blame for the pandemic’s dreadful toll, often by those trying to hide from their own records, a few things should be kept in mind.

The first one is that as of May 12, Canada ranks 20th out of 175 countries, in terms of its vaccination response, as reported by Bloomberg News. It would be nice to be 10th, and the bee’s knees to lead the pack, but Canada is still doing better than 155 other countries.

With more vaccine on the way from suppliers like Pfizer and Moderna, things should steadily improve. Just this week, Trudeau said all Canadians who want it will have one shot by the end of June. By the end of September, all willing Canadians will be fully vaccinated. Not ideal, especially for seniors who face a long wait in getting that second shot, but far from a failure. 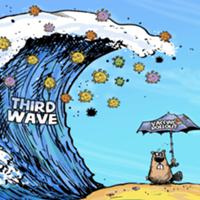 On the economic side, the Trudeau government has spent massively supporting individuals, businesses, airlines and provincial and territorial governments. That includes $19 billion to the provinces under the Safe Restart program. With billions more earmarked for national daycare, an increase for pensioners and some relief for students, (all subject to budget implementation), O’Toole’s talk of people being left behind is partisan drivel.

There may be a public inquiry one day. I hope there is for everyone’s sake. But before that process runs its course, Canadians will get to say whether they would rather have the Erin O’Tooles, the Doug Fords or the Jason Kenneys running the show when the chips are down. Or Justin Trudeau.

So far, it’s no contest.