In a win for the long-term survival of humanity, the United Nations’ treaty banning nuclear weapons was ratified by the 50th country over the weekend, allowing the pact to pass.

But any celebration in Canada should be muted by embarrassment at our government’s indifference to the threat nukes pose to humankind.

The Treaty on the Prohibition of Nuclear Weapons was negotiated at a 2017 UN conference, creating a legally binding agreement that would ban nuclear weapons and lead toward their total elimination.

Rather than showing support for this important meeting, Canada was in a minority of countries that voted against even holding this conference at a General Assembly vote in autumn 2016. (More than 120 countries were in favour of holding the conference; just 38 were opposed.)

Additionally, Prime Minister Justin Trudeau refused to send a representative to the 2017 conference, where two-thirds of the world’s countries were represented.

Trudeau was dismissive of the conference: “There can be all sorts of people talking about nuclear disarmament, but if they do not actually have nuclear arms, it is sort of useless to have them around, talking.”

Around the same time, Trudeau made no effort to congratulate Canadian activist Setsuko Thurlow, a survivor of the atomic bombing of Hiroshima, who co-accepted the 2017 Nobel Peace Prize on behalf of the International Campaign to Abolish Nuclear Weapons.

The Trudeau government has failed to join the 84 countries that have already signed the nuclear weapons treaty, described by UN Secretary-General Antonio Guterres as “a very welcome initiative."

Mexico and New Zealand, an ally with Canada in the Five Eyes security network, as well as European Union members Ireland and Austria have ratified the treaty. On Saturday, Honduras became the 50th nation to ratify it, which means it will enter into force in 90 days.

In a last-ditch attempt to block the accord from reaching the required 50 member states, the Trump administration delivered a letter calling on countries that had signed to withdraw their support.

According to an Associated Press report, the letter claims U.S. NATO allies — like Canada — “stand unified in our opposition to the potential repercussions” of the treaty.

For countries that have ratified the treaty, nuclear weapons will become illegal. It requires ratifying nations to “never under any circumstances… develop, test, produce, manufacture, otherwise acquire, possess or stockpile nuclear weapons or other nuclear explosive devices.”

It also bans transferring nuclear weapons, stationing them in another country or threatening to use them, while requiring participants to promote the treaty with other UN member states. The treaty includes provisions around requiring any nuclear weapons-holding country that joins to dispose of its arsenal. When it enters into force at the end of January, ratifying nations will be bound by the treaty.

As with previous international treaties on cluster bombs and landmines, one objective of the treaty is to stigmatize the stockpiling and use of nuclear weapons in the hope this will ultimately change the behaviour of even those countries that do not sign up.

Nuclear weapons continue to pose a serious threat to humanity’s long-term survival. Tens of millions could die almost instantaneously if nuclear weapons were exploded over cities, and the use of a fraction of the more than 13,000 nukes in the world could imperil billions in a global famine.

The Liberal government says it cannot ratify the UN nuclear ban treaty because of Canada’s membership in NATO.

Rather than offer this excuse to avoid signing a treaty opposed by powerful allies and Canada’s military, it could instead be used as a moment to consider re-evaluating Canada’s involvement in NATO.

The Canadian Foreign Policy Institute initiated an open letter to Trudeau after Canada’s second consecutive defeat for a seat on the UN Security Council.

The letter asked: “Should Canada continue to be part of NATO or instead pursue non-military paths to peace in the world?” It has been signed by Greenpeace Canada, 350.org, Idle No More, Vancouver and District Labour Council and 50 other groups, as well as four sitting MPs and David Suzuki, Naomi Klein, Stephen Lewis and more than 2,000 others. 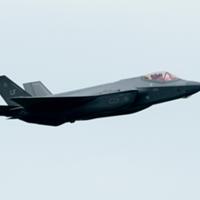 No, Canada Doesn’t Need to Spend $19 Billion on Jet Fighters

The NDP, Greens and Bloc Québécois have all called for Canada to adopt the UN nuclear ban treaty. Thousands of Canadians have also signed petitions calling on the government to join the initiative.

Nuclear weapons will soon be banned under international law. The government needs to be challenged to get on the right side of history and sign the Treaty on the Prohibition of Nuclear Weapons.

Only then can Canadians proudly celebrate the critical effort under way to protect the future of humanity.