"We got it. We just stayed right in bed; every girl that was in the convent was in bed. I was so sick then. I tried to fight it, you know, and the nun kept saying, ‘You'd better go to bed,’ she’d say. So finally, I went to bed and she came upstairs and took my temperature. My temperature wasn’t too bad, so I went to bed and I just covered up and I stayed right in bed. I’d cover my head and all and just stayed right there. Every once in a while the nun would come by and she’d say, ‘Are you still alive?’”

That’s how the late Mary Eglund (Lil’wut) recalled the influenza pandemic of 1918-19.

Eglund survived, but many of her friends did not. First Nations in B.C. suffered at least 1,139 deaths from influenza, a rate eight times greater than non-Indigenous people, according to University of British Columbia researcher Mary-Ellen Kelm. The death rate was 46 per 1,000 population compared to 6.2 per 1,000 in non-Indigenous communities.

Times have changed — or have they?

So far there are no reports of COVID-19 infections among First Nations. Indigenous leaders are determined to keep it that way but face myriad challenges, many linked to the legacies of colonialism.

The First Nations Leadership Council Monday demanded the federal government declare a state of emergency “before the pandemic sweeps through Canada’s most vulnerable communities, including First Nations.” The council is composed of the executives of the Union of BC Indian Chiefs, the First Nations Summit and the BC Assembly of First Nations; it represents the majority of the 203 First Nations in the province.

“The time for denial and bureaucratic delay about the spread of COVID-19 is over — our communities are in crisis and we are looking for answers and for resources to stop the spread of this horrendous and nightmare pandemic.”

Why such a sense of urgency?

Dispossession over the years has meant that many First Nations are now centred on reserves, in some cases isolated and under-resourced, with few hospitals and health-care facilities able to cope with a pandemic.

A number of nations have already restricted entry to their communities.

The Musqueam nation (xʷməθkʷəy̓əm) has established an emergency response team that provides up-to-date information to the community and makes available online resources to help families cope at home.

Last week, the team issued a special notice limiting access to its reserve in south Vancouver.

Other nations have taken similar steps.

Marilyn Slett, chief councillor of Heiltsuk Tribal Council, announced the nation was taking the extraordinary measure of discouraging non-residents from travelling to Heiltsuk territory on the central coast.

“Bella Bella is highly vulnerable to a COVID-19 outbreak,” she said in a message shared last week. The community has limited hospital capacity and many community members suffer from health issues such as diabetes, high blood pressure, heart disease and respiratory problems.

Slett assured community members living off reserve that “you have always been and will always be Heiltsuk no matter where you reside.”

On Vancouver Island, Ty-Histanis, a community of the Tla-o-qui-aht First Nation near Tofino, has restricted access to their community. Tsawout Chief Nicholas Claxton says they have also closed their reserve north of Victoria, while the band office keeps essential services going.

Other measures needed for off-reserve population

But the majority of Indigenous people live off reserve, many in poorer neighbourhoods, including Vancouver’s Downtown Eastside, where they remain especially vulnerable.

Indigenous scholar and activist Pam Palmater has called for all governments to apply a gendered lens to the crisis and develop a comprehensive plan that will protect women and girls.

Regional Chief Terry Teegee of the Assembly of First Nations explained the sense of urgency.

“Historically, First Nations communities have been devastated by pandemics and we must take decisive action now before we see our community and family members fall ill.”

Though limited, research on the history of pandemics and First Nations reinforces the need for urgent measures.

A history of horror

Just as humans today have no immunity to the COVID-19 virus, First Nations had no immunity to diseases such as smallpox and measles brought to the coast by Europeans in the 19th century. This, among other factors, led to severe population decline among First Nations in the province, from an estimated 100,000 in the early 1800s to about 25,000 a century later.

During the 1862-63 smallpox epidemic, the Lekwungen (Songhees) escaped the disease by quarantining themselves at their village on Discovery Island. Some had received immunization.

But the large number of Indigenous peoples visiting from the north received no immunization. When they were driven from Victoria by colonial officials, the disease spread to communities up and down Vancouver Island and on the coast, leading to thousands of deaths.

Settlers trying to get to the Cariboo gold field through Tsilhqot’in territory spread the disease there. “Many estimates suggest that half the population of the Tsilhqot’in were killed in this epidemic,” states historian John Lutz in his award-winning book Makúk.

Such experiences are part of every First Nation’s history. And they are not limited to the ancient past.

Tuberculosis, for example, was deadly for First Nations. Residential schools, created supposedly to teach cleanliness to Indigenous youth, acted as incubators of the notorious disease.

Kelm’s research has revealed that 70 per cent of residential students reacted positively to tuberculosis tests. Kuper Island (Penelakut) industrial school was “plagued throughout its history with endemic tuberculosis among its students.”

“When I was a young man and TB was still running like wildfire, our people were dying so often it seemed like every week we were taking somebody up to the cemetery to bury them. In the morning when you’d get up the first thing when you opened the door you would hear somebody crying or wailing away,” he said. “Amid this crying and mourning you would hear saws and hammers going. We used to make our own caskets. They would get up early in the morning and start making the coffin. This is the sound I would wake up to, this is the first sound I would hear in the morning when I opened the door. This is what we lived through. It lasted up into the '50s.”

Appalling TB rates led to fear in non-Indigenous communities and increased racism, leading to the creation of segregated Indian sanatoriums in the 1930s. As Dave Elliot testified, the suffering continued into the 1950s and rates only started to decline after the creation of the B.C. hospital commission that began to enforce standard treatments throughout the province in 1950.

But many First Nations continue to have high rates of illnesses that increase their risks from COVID-19. A visit with some Mowachaht/Muchalaht Elders not long ago revealed that a number were just recovering from respiratory illnesses.

As Heiltsuk Chief Slett has emphasized, pre-existing conditions among community members, often related to poverty, lack of clean water and housing, are a legacy of colonialism and constitute a real and present danger to First Nations. 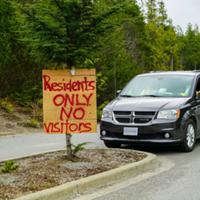 First Nations today are hoping for the best, but preparing for the worst. An important asset in the fight is the First Nations Health Authority, an Indigenous-controlled public body that replaced the federal government’s Pacific Region Health Branch.

Working with First Nations’ governance bodies as well as federal and provincial agencies, it is helping communities face the danger of COVID-19. Taking advantage of initial federal funding announced on March 11 that included “ongoing support for preparedness in First Nations and Inuit communities,” the FNHA is helping nations update their pandemic plans, co-ordinating service delivery and support and procuring essential medical equipment.

Interviewed by CBC reporter Angela Sterritt, he urged the federal government to step and meet the demands of communities. He also called for First Nations to carefully assess and change ceremonies as needed.