For years in British Columbia, the elected powers looked at rising home prices and saw that it was good.

It’s “a challenge that virtually every other jurisdiction would like to have,” said former BC Liberal finance minister Mike de Jong in 2016.

Such is the gospel of growth.

In 1976, sociologist Harvey Molotch wrote of the alliance between government and the development industry to intensify land use.

Molotch called it the “growth machine,” where urban growth is portrayed as common sense and everyone who invests in real estate is wise.

In increasingly unaffordable Metro Vancouver, what does our growth machine look like? What are the alliances that power it? What narratives are told to fuel it?

Renowned University of British Columbia geographer David Ley, who’s been studying Vancouver ever since he arrived in 1972, lifts the hood of the province’s growth machine in his latest paper.

He found the engine powering the machine — a free-market B.C. government coupled with a trans-Pacific property industry. Together they ignited the commodification and globalization of Vancouver housing, found Ley.

Lubricating investment in Vancouver were watchdogs that were either “complicit or complacent” in dealing with property related money laundering, tax evasion and creative opportunism.

Housing affordability for the local population wasn’t part of the plan. “Social costs were disregarded in the interest of private gains,” he said.

It’s a helpful connect-the-dots of what happened during the boom years of real estate under the 17-year reign of the BC Liberal Party, and how a mid-sized city like Vancouver became swamped by global capital.

You may have heard some or most of this story before, but Ley’s inspection of the machine’s inner workings is worth a closer look, and he elaborated in an interview with The Tyee.

It started with a weakened economy.

In the 1980s, the province’s resource economy was struggling due to a decline in forest and mining activity. In response, borders opened.

Immigration targets were raised, and investors in particular were lured. In 1988, the province sold the waterfront site of Expo 86 to a Hong Kong syndicate led by billionaire Li Ka-shing, a symbolic kickoff for Asian property investment in the province.

In the early 1990s, banks estimated $2 billion to $4 billion a year was being transferred to Canada from Hong Kong alone. Income from real estate was the largest declared revenue source for investor immigrants.

In 2015, the projected dollar volume of residential resales was pegged at $38.6 billion by the Real Estate Board of Greater Vancouver. That was triple the combined $12.7-billion GDP of forestry, mining and oil and gas that year.

In three decades, B.C.’s economy had been transformed from resources to real estate.

The BC Liberals, who governed the province from 2001 to 2017, had much to gain from rising prices.

There was increased revenue from property taxes and property transfer taxes, which brought in $2.2 billion in 2016. There was also a requirement for immigrant investors to B.C. to loan $800,000 to the province interest-free for five years.

The Liberals were so entangled with the property industry that a past president of the Real Estate Institute of Canada called the relationship “incestuous.”

Property developers became the party’s top donors. Between 2014 and 2016, the party’s chief fundraiser was real estate marketer Bob Rennie, often dubbed the “condo king.” This all happened while unlimited donations were still permitted.

In 2015, then premier Christy Clark was playing down the evidence that foreign investors made up a significant portion of the real estate market. However, a freedom of information request revealed that at the same time she was selling B.C. as a “progressive and open minded” real estate haven at informal roundtables with real estate tycoons in China and Hong Kong.

For both the property industry and the provincial government, the globalization of Vancouver real estate was good.

All the while, deregulation greased the wheels.

As the growth machine chugged along, watchdogs proved ineffective.

But the tenacity of investigative journalists helped expose the hidden beneficiaries of the real estate boom, as well as a public sector that was under-resourced or “too timid to address the flat-out market obsession,” said Ley. 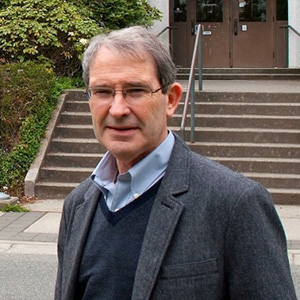 UBC geographer David Ley lifts the hood of our regional ‘growth machine’ in his latest paper. Photo courtesy of UBC.

There was the revelation that the Canada Revenue Agency knew about tax evasion by big offshore real estate investors in the mid-1990s.

But immigrants who owned expensive homes but declared “minimal declared income” refused to co-operate with the CRA, according to reporting by Ian Young in the South China Morning Post. Canada Revenue Agency managers allegedly chose to ignore the cases because they “did not want to put resources towards these high-hour audits.”

In 2005, the BC Liberals deregulated the Real Estate Council of B.C., meaning that realtors would be allowed to manage their own conduct and consumer protection, as opposed to an arms-length public body.

In 2015, the Globe and Mail reported Vancouver banks were loose in meeting rules requiring foreign homebuyers to disclose their income sources, even offering loans without them. And the next year it uncovered “shadow flipping,” the practice of repeatedly reselling property assignments to inflate prices and dodge paper trails.

Addresses from high-priced Metro Vancouver neighbourhoods were found in the Panama Papers’ leak of documents related to offshore tax haven accounts. Transparency International also found that half of the 100 most expensive houses in Metro Vancouver were purchased by shell companies, trusts or nominees.

Activity like this led international agencies, such as Berlin’s Transparency International, to declare Canadian financial institutions “very weak,” as well as “highly vulnerable” to money laundering.

And just last year, it was revealed that there were no dedicated RCMP officers in B.C. investigating money laundering.

Despite public outcry about a broken housing market, and various experts proposing many solutions, the growth machine dismissed the problem of unaffordability, Ley found.

At the suggestion of cooling the market, finance minister de Jong flatly said, “We’re not interested.”

Ley is currently researching a book on housing in the gateway cities of Hong Kong, Singapore, Sydney, Vancouver and London. Until the BC NDP came to power, there was less done in Vancouver than any of those cities to cool its hot market, he said.

“We tend to think of Singapore and Hong Kong as so friendly and so wide open to the market,” said Ley. “But they had done far, far more than Vancouver had. In hindsight, when you look comparatively, it’s extraordinary that nothing was being done. Of course, it was justified in part through a strong denial movement that there was a problem.”

In the 1990s, the province stopped collecting information on the citizenship of property purchasers, aiding the dismissal of foreign activity heating up Vancouver housing.

The growth machine also had rationales to help it along, such as former Vancouver mayor Sam Sullivan’s EcoDensity initiative, transit-oriented development or Yes In My Backyard, which all call for more urban density.

These growth strategies offer many “undoubtedly attractive” qualities such as walkability and less car use, said Ley, but often fail to address affordability.

“There doesn’t seem to be recognition of this contradiction: using green slogans to produce landscapes that are less affordable,” he said. “They are rationales for development, and of course developers are keen to support them.”

So, what finally slowed the growth machine?

Near the end of the BC Liberals’ tenure, scathing industry reports, journalistic investigations and the worsening housing crisis threw wrenches into the growth machine.

Watchdogs reacted. The CRA, in 2016, initiated a broad investigation into the filings of high-end buyers. That same year, the Real Estate Council of B.C. was reconstituted as a public entity, with disciplinary fines for individual brokers raised from maximum of $10,000 per infringement to $250,000.

Ley says he attended a number of round tables on the issue. At one, an experienced realtor declared that “There are not one or two bad apples among real estate agents in the Vancouver area, but hundreds, maybe a thousand.” (“He was not contradicted around the table,” Ley noted.)

Ley writes that while there may have been collusion between government and the property industry, their “common commitment to keep investment capital flowing may also have led to convergence without collusion.”

It was enough to keep the growth machine chugging along, fuelled by licit and illicit capital both local and global. The province, seeking to rejuvenate a declining resource economy in the 1980s, helped create a hot commodity out of Vancouver real estate.

Clark’s Failure on Housing Affordability Big Problem for BC Liberals

Only since the NDP was elected to power in 2017 have cooling measures been introduced.

“It’s good to maintain a historical vision when we’re talking about the present,” Ley advises. “There have been huge development cycles in the past.”

The city’s first boom was in the 1910s, fed by immigrants from various corners of the English-speaking world. Today, with fertility rates dropping and little migration within Canada itself, growth is, and almost certainly will be again, fed by newcomers.

“Immigration is the big story,” said Ley. “Undoubtedly, this is a growth region, and will continue to be.”

Today, the average price of a Metro Vancouver home is just over $1 million.