On Monday morning, Vancouver Sun editor-in-chief Harold Munro gathered his staff to address the controversy engulfing both Postmedia newspapers in the city, and wept.

Three days before, the Sun and Province had published an opinion piece by Mark Hecht under the headline “Ethnic Diversity Harms a Country’s Social Trust, Argues Professor.” Canada, wrote the sessional instructor at Calgary’s Mount Royal University, should “say goodbye to diversity, tolerance and inclusion.”

The piece brought immediate condemnation and criticism, including from a number of Sun and Province journalists as well as other members of the public. Munro pulled the piece from the papers’ websites, though it ran in the Sun’s Saturday print edition.

Munro posted an apology the same Saturday, vowing to “review our local workflow and editorial processes to ensure greater oversight and accountability so that this does not happen again.”

Then came Monday, and the staff meeting called by Munro. As journalists and other employees listened, Munro emphasized that he wants to make more space on the op-ed pages for a wide range of voices, at one point breaking down in tears, sources tell The Tyee.

But one person sat alone, away from the gathering — Sun and Province editorial pages editor Gordon Clark. He was the one who approved and published the piece. Munro claimed not to have seen it before it went out, though sources tell The Tyee he was in the building.

Munro’s address to staff lacked a few elements many in the room were hungry to hear. He did not mention any specifics about how procedures or policies would change in the newsroom. Nor did he say whether Clark would be replaced in his role at the paper or face any consequences.

In fact, sources told The Tyee, Munro did not mention Clark’s name, even as he sat aloof and silent in the same room. “People couldn’t believe Gordon didn’t apologize,” a Sun staffer told The Tyee.

How could such a piece be published by major newspapers in one of the most ethnically diverse regions in North America? Jeffrey Dvorkin, director of the journalism program at the University of Toronto Scarborough, blamed cutbacks in newsrooms. People are stretched so thin that “mistakes like this, which used to hardly ever happen, are now happening with greater frequency.”

But decisions about what gets published at major newspapers aren’t made arbitrarily. Last year Clark was promoted to opinion page editor after working at Pacific Newspaper Group since the 1990s and writing many columns himself.

Given how important a position he occupies — facilitating conversation in the public interest on the pages of two newspapers reaching tens of thousands of local citizens — one must assume he was rewarded for the performance, and viewpoints, he’s demonstrated over time. What can we learn of those?

During the last federal election campaign in 2015, Clark wrote in the Province that he was the son of a Canadian diplomat and had personal reason to be able to say Muslim women wearing the niqab were “kind of being jerks.” 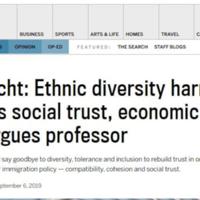 That Sun Column Was No Outlier. Postmedia Has Embraced Dishonest, Dangerous Propaganda

“In wearing the niqab, whether they intend to or not, Muslim women are telling other Canadians that they think they are better than everyone else. That they are more pure or devout — so special that the rest of us shouldn’t even be allowed to see their faces. In an egalitarian society like Canada’s, that’s the real insult of the niqab.”

When he was a young reporter in the 1980s, Clark elaborated, he visited his father who was posted in Jakarta. Clark showed up wearing tennis shorts, which his father told him were a symbol of colonial oppression to Indonesians. Clark took the high road and changed into long pants, he wrote, unlike Muslim women in Canada who do not shed their niqabs — “they’re kind of being jerks — as I would have been had I insisted on wearing shorts.”

Available on the web, too, is a videotaped moment when citizen Clark addresses the Vancouver city council to register his opposition to planned townhouses near his single-detached home in Kitsilano. Clark is on the record having written against further densification, because as “a Vancouverite, born and bred, I am firmly in the camp that believes the city used to be a much nicer place to live and that almost all the significant problems facing Vancouver now are the direct result of too many people.”

Clark tells council that he, his wife and two kids are “plugging away” in their 1,800-square-foot house on Vancouver’s west side as he opposes a proposed nearby townhouse development. He also has shopped for a condo, he says, because sometimes “I get tired of mowing the grass.” If some people might find that meandering, contradictory and tone-deaf from the arbiter of views in the major newspapers in a city with an affordable housing crisis, Clark does not disabuse. Three-bedroom condos, he complains, cost more than his house!

What would be Clark’s solution to lower housing prices in his neighbourhood and the region? The answer can be found in another piece he wrote in The Province, headlined “Are We Allowing Too Many People into Canada?”

Clark notes that a “way to reduce prices is to turn down demand.” He folds in all the other woes he sees in the Lower Mainland, from traffic jams to medical care wait times, and concludes “If two-thirds of the growth causing these problems is coming from offshore, with most immigrants moving to Canada’s major cities, should we at least not ask if we are allowing in too many people?”

As Canadaland has reported, Hecht said he was encouraged to try his piece on the Vancouver Sun because of other pieces the paper had run.

On Wednesday afternoon The Tyee asked Munro by email what specifically he would be changing in terms of opinion article workflow and oversight, and whether Clark will remain in his job. That email and one to Clark went unanswered. Less than two hours after, Munro released to Sun staff this memo (lacking any mention of Clark while implying the higher priority is to protect his privacy).

It is safe to say that Clark does not spend his work days roaming neighbourhoods of the Lower Mainland meeting immigrants to understand the value they bring to our society — and to find new, non-white voices to run in his pages. Sources at the Sun said many days Clark can be found on the premises watching CNN for hours, conversing with whomever might wander by about Donald Trump and U.S. politics.

If he keeps his post, we must conclude he’s earned his position by other criteria — by being the filter on our world Postmedia desires.