Thanks to a senator, a movie star and a former British Columbia MP who posed the right question 24 years ago, Justin Trudeau is looking like a poseur again.

And I haven’t even gotten to the fishermen.

Does the Prime Minister really care about the environment, as he always claims? Or is he just “genuinely insincere,” as Ottawa Life Magazine recently put it? Not an unimportant query, with this fall’s general election just eight months away.

The Prime Minister was hit particularly hard last week on what is turning into a signature blunder of his government — federal inaction on an environmental fiasco, this time featuring a polluting pulp mill in rural Nova Scotia. It is the disgrace of Boat Harbour. Once a tidal estuary teeming with marine life, it is now dead, black water — the ravaged tool of irresponsible industry.

It got that way after more than 50 years of being used as a settling pond for the mill’s toxic effluents before being treated and discharged into the sea. With Boat Harbour set to close by Jan. 31, 2020, Northern Pulp now needs a new place to process its waste. And that’s where the problem for Trudeau and Ottawa comes in.

Northern Pulp has unveiled its plans to build a 10-kilometre pipe into the ocean. It would then pump up to 93 million litres a day of “treated” effluent, heated to 37 degrees, into the Northumberland Strait. Fishermen say this will result in a huge increase in suspended solids that will settle on spawning grounds.

But the company threw a curveball at the Nova Scotia government when it presented its plan. It also wants to delay the closure of Boat Harbour by a full year — even though it knew five years ago about the 2020 closing deadline as well as the need for a Plan B.

If it doesn’t get its way, Northern Pulp has threatened to shutter the plant, throwing 300 people out of work and damaging the forest industry that feeds the mill.

The company’s arrogance and disregard for the environment have left a lot of people unimpressed, including movie star Ellen Page.

Last week on The Late Show with Stephen Colbert, the 31-year-old Page told the TV host that the pulp mill had “destroyed the environment and the land of First Nations people.”

The Nova Scotia-born actor made the case that people who had nothing to do with creating these problems in the first place — the “marginalized people” — were always the ones who suffered the most.

In this case, that would be the Pictou Landing First Nations, a small community of 450 residents on reserve and 100 off, that has had to live with the pollution from Northern Pulp for half a century.

They were the victims of what Page called “environmental racism.” Landfills were all too often built next to the communities of people of colour. Pulp mills like the one in Nova Scotia were frequently located adjacent to First Nations’ land. Page insisted that it stop.

The PM’s principle secretary, Gerald Butts, must have spilled his latte when he saw Page’s tweets.

The actor’s followers in Canada are exactly the demographic the Liberals hope will keep them in power this October. The Prime Minister’s Office must know that millennials are not about to endorse a phony on the two issues that matter most to them: social justice and the environment.

Senator Mike Duffy made his objections to the pipeline just as passionately as Page did but from a different platform — the Senate of Canada.

After meeting with fisheries groups from Atlantic Canada, Duffy told his fellow senators that there was a “looming environmental crisis” in the Gulf of St. Lawrence and the Northumberland Strait. He warned that the fishery could be damaged in three Maritime provinces, in Quebec’s Magdalen Islands and, he said, “beyond.”

The Nova Scotia government, having agreed in the past that taxpayers would be responsible for Northern Pulp’s environmental liabilities, is effectively the company’s business partner — and it is doing the environmental assessment of the proposal. Premier Stephen McNeil is hopelessly conflicted. It is a cringeworthy example of being the judge in your own cause.

In order to respond to the strong objections of those who opposed the pipe, there was only one solution in Duffy’s view. “We are asking for a full federal environmental assessment of this dangerous project and we invite you to join us in making that demand,” he told his fellow senators.

Duffy is ruffling his share of feathers with this request, including those of the PM. On a recent trip to Nova Scotia, Trudeau, like his environment minister, Catherine McKenna, did not visit Boat Harbour. When asked by reporters if that was his way of turning down a federal environmental assessment for Northern Pulp’s proposed pipe, the Prime Minister said, “That is me respecting areas of provincial jurisdiction.”

That could be the gaffe of his prime ministership, right up there with self-balancing budgets and using every last drop of bitumen in the oil sands.

The senator took up the cause, and the movie star glamourized and amplified it. But fishermen remain the soldiers on the front line of this battle.

And their latest effort, a letter to federal Fisheries Minister Jonathan Wilkinson, shows they are getting pretty good at hand-to-hand combat with slippery politicians and wily bureaucrats.

In their letter, a copy of which has been obtained by The Tyee, the Gulf Nova Scotia Herring Federation got in the government’s face.

Chairman Greg Egilsson pointed out that Northern Pulp’s toxic effluent would be going “right in the middle of the last major active spawning area for 16F herring.” Given the speed and direction of tides in the area, that “would ensure that the effluent would settle out across the entire remaining herring spawning grounds.”

Disturbing sensitive fish habitat is never a good idea. But Egilsson’s point is especially critical, as he notes the local herring spawning stock “is not in good condition” and that is a “Gulf of St. Lawrence-wide phenomenon.”

Egilsson left no wiggle room in the argument: “If there is a wrong place for the Pipe, this is it. There is no Right Place in 2019.”

Percy Hayne, long-time fishermen and member of the Save our Seas and Shores Coalition, brought home how necessary it was to protect herring habitat.

“This isn’t the same gulf that was there in 1967. It’s the same expanse of water, but it’s polluted. We’re seeing de-oxygenation, plankton levels down 50 per cent from what they were four or five years ago, and now the federal government is predicting the cod fishery will be extinct in a few years. A six-year-old fish today weighs what a four-year-old fish did 10 years ago. We got to stop dumping stuff in the ocean.”

As powerful as Egilsson’s conservationist arguments are, his letter to the federal fisheries minister also featured a razor-sharp political spearpoint. As he reminded the minister, this was not the first time the idea of a pipe to send Northern Pulp’s effluent into the strait had been raised.

Back in 1994, B.C. Reform MP John Cummins raised the issue in Question Period in the House of Commons. Scott Maritime Ltd., then owned the Nova Scotia pulp mill, also wanted to pump millions of litres of effluent into the rich fishing grounds of the Northumberland Strait.

Cummins was seeking assurances from the Liberals that they would not allow the company to damage fish habitat. He told the Commons that shellfish harvests off the West Coast had been closed “because of poisoning from pulp mill effluents.”

Cummins, with experience in both the pulp and paper industry and the commercial fishery in B.C., knew exactly why fishermen on the East Coast were vowing to blockade the proposed pipe.

Introducing pollutants into critical spawning grounds was contrary to the Fisheries Act, Tobin said. There would be no pipe without a full environmental assessment — and consultation with fishermen. “This government will not compromise conservation habitat for any reason,” Tobin told the House of Commons.

It was quite a statement coming from the man who was arguably the most famous Liberal fisheries minister of them all. Tobin earned the nickname “Captain Canada” for his battle to save collapsing turbot stocks from the predatory Spanish fishing fleet back in the 1990s.

If the current crop of Liberals do nothing about the pollution threat in the strait to herring, lobster and rock crab stocks, and the PM won’t even accept jurisdiction, he might rate a nickname too — Captain Copout.

“Mr. Minister, where is your intervention?” Egilsson asks in his letter. “You have an obligation to protect fish habitat. Your predecessor minister of fisheries and oceans Brian Tobin made direct reference to his powers under the Fisheries Act to stop the proposed Pipe in 1994...”

Egilsson’s letter, which was copied to the Standing Committee on Fisheries and Oceans, will not stay on Wilkinson’s desk very long. A copy will be sent to Environment Minister Catherine McKenna, and of course, to the Prime Minister. The interesting part will be what they do about it.

Although Liberal apparatchiks might decide to treat this as a local issue, which will put perhaps a seat or two at risk in rural Nova Scotia, they do so at the Prime Minister’s peril. 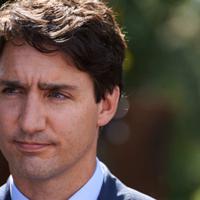 At one level, Boat Harbour is a local issue. But on another, it is emblematic of what this prime minister has done in other places — talked up environmentalism and then acted like Stephen Harper.

The most eco-conscious province of them all, British Columbia, has skin in this game. Like Nova Scotia fishermen who faced the Mounties while confronting Northern Pulp’s survey boats in the gulf, British Columbian pipeline protestors and land protectors have felt the long arm of the RCMP at Kinder Morgan’s gates.

And just as Nova Scotia fishermen have seen Northern Pulp degrade a tidal estuary, British Columbian environmentalists have already complained work on the Trans Mountain pipeline expansion destroyed salmon habitat in Stewart Creek. The two coasts of Canada have a spiritual bond through the oceans that lap against their shores.

It is not an accident that Halifax joined Vancouver as the first cities in Canada to declare a climate emergency.

Time for the PM to catch up.