[Editor’s note: More than a year after a police raid in northern British Columbia attracted international attention, tensions between Wet’suwet’en land defenders and the RCMP are rising once again in the area. This article was first published Jan. 17, 2019 but applies to today’s events, so we’re re-sharing it.]

The use of heavily armed RCMP to enforce a court injunction and tear down an Indigenous blockade against TransCanada’s Coastal GasLink pipeline in northwestern British Columbia last week was part of a familiar pattern, say criminologists.

“It seems like Canada uses a show of force and police repression whenever it wants to contain First Nations exercising their aboriginal rights and title,” said Shiri Pasternak, a criminologist at Ryerson University and director of the Yellowhead Institute, a research centre focused on First Nations land and governance issues.

“Canada is creating the problem by refusing to recognize what its own courts are saying about aboriginal rights and title,” added Pasternak.

Over the last decade rulings by the Supreme Court of Canada and lower courts have established that Canadian governments have a duty to consult and accommodate Indigenous people before resources are extracted from their land, and that in many cases their land and title rights have not been extinguished.

Unlike many elected First Nations governments along the pipeline route, which signed economic benefit agreements with TransCanada, the hereditary chiefs of the Wet’suwet’en Nation have remained opposed to intrusions on their traditional lands.

Jeffrey Monaghan, a criminology professor at Carleton University who co-authored Policing Indigenous Movements: Dissent and the Security State with Andrew Crosby said the dismantling of the Wet’suwet’en blockade was intended to send a national message.

“It was very carefully choreographed to communicate to the national audience that any protests against oil and gas pipelines are going to be cracked down upon. I think it was highly symbolic. Police action doesn’t stop with the Wet’suwet’en,” said Monaghan.

He added that the Canadian government has expanded its security apparatus and normalized the police surveillance of social movements in recent years, including First Nations defending their land and title rights.

And the use of the RCMP to enforce court injunctions has become a routine practice.

In 2013, for instance, heavily armed RCMP raided a six-month-old blockade set up by the Elsipogtog First Nation in Rexton, New Brunswick.

For months the nation had protested the lack of consultation and groundwater risks posed by shale gas fracking on their land.

The raid resulted in a melee in which more than 40 were arrested and six cars burned.

The RCMP’s Civilian Review and Complaints Commission received hundreds of complaints about police conduct during the raid but still hasn’t released a report on the incident five years after the fact.

Between 2016 and 2017, the RCMP were repeatedly called in to arrest and remove Innu, Inuk and Metis people protesting the over-budget Muskrat Falls hydroelectric project.

Many of the protesters, including a grandmother, were jailed hundreds of kilometres from home for raising concerns about the dam’s safety, economics and mercury contamination in wildlife downstream.

In a 2017 open letter to Newfoundland premier Dwight Ball, five senators wrote that “Our country is struggling with a colonial legacy that continues to disproportionately marginalize, criminalize and deprive Indigenous Peoples of political agency.”

“This context makes decisions to imprison Indigenous men and women for using protest to assert their right to determine how their traditional lands are used particularly abhorrent,” added the letter.

But such heavy-handed treatment has become a normal course of events in Canada, according to criminologist Pasternak.

Governments and companies first deny the existence of Aboriginal rights and title, she said.

When that fails, they recognize the rights but engage in negotiations to contain them. And if that doesn’t end the protests, the state will employ police force for pacification, she said.

In the process the protesters are often portrayed as “lawless Indigenous protesters, when it is really the state engaging in lawless behaviour,” said Pasternak.

Pasternak cited the 1989 Innu protests against NATO low-level flights in Labrador and the 1990 Mohawk opposition to a golf course as examples of how the state responds to First Nations defending intrusions on their land.*

In recent years, the Canadian government has viewed both environmentalists and First Nations as threats to national security as the state’s growing security establishment has blurred the boundaries between activism, civil rights and terrorism, according to Monaghan.

The criminologist spends much of his research time parsing security reports, such as the RCMP’s Monthly Strategic Bulletins, that he has obtained through freedom of information requests.

A 2015 risk assessment by the Government Operations Centre on the Wet’suwet’en blockade camp, for example, complained that a recent Supreme Court decision had “strengthened the perceived First Nations control over resource development within their traditional territories. The Unist’ot’en Blockade Camp is the ideological and physical focal point of Aboriginal resistance to resource extraction projects.”

“These documents are routinely dismissive of Aboriginal protestors and Aboriginal land and title claims. They deny and delegitimize these claims,” he said.

Secondly, they view “all forms of Indigenous protest as part of a broader anti-pipeline movement opposed to Canadian economic interests.”

Ever since the Idle No More movement arose in 2012, the RCMP became so preoccupied with Indigenous protests that it set up Project SITKA to monitor and track activists taking part in so-called “public order events.”

The RCMP broadly defined “public order events” as those protesting shale gas fracking, speaking out about land claims or calling for an inquiry on missing or killed Aboriginal women.

Canadian Journalists for Free Expression later decried the RCMP spying project, saying “Innocent advocates were investigated and catalogued based on little more than a perceived potential threat that their expression might pose to the state.”

SHOWS OF FORCE: A SNAPSHOT OF CANADIAN POLICE PRESENCE IN INDIGENOUS PROTESTS

After politicians ignored six years of civil complaints about the impact of low-flying NATO fighter flights on their health, land and hunting, the Innu repeatedly occupied a U.S.-built airfield in 1988 and 1989. A court injunction led to hundreds of arrests. At the height of the protests in November 1988, the RCMP laid 129 charges of mischief, property damage or resisting arrest to 57 men, 60 females and 13 teenagers.

Authorities attempted to brand the protestors as radicals and extremists. Canada did not stop the low-level flights because of the economic benefits generated by the air base. But low-altitude bombing eventually went out of fashion after the Gulf War proved it was a risky military tactic. The Innu eventually negotiated a comprehensive land claim.

In 1995, a dispute over a sacred site on unceded lands led to a confrontation between a group of land defenders and 400 heavily armed RCMP and soldiers. The RCMP kept the press away from the site.

More than 70,000 rounds were exchanged before the standoff ended and protesters were arrested. As one account notes, “Serious questions remain about the role of the RCMP, who acted as the enforcement arm of state policies designed to constrain the effort to internationalize the Aboriginal title question.”

After decades of struggling with mercury pollution from a pulp mill, the Asubpeeschoseewagong Anishinabek (Grassy Narrows First Nation) decided to defend what remained of its homeland by setting up a blockade against industrial clear-cut logging. Over the years the Ontario Provincial Police have made numerous arrests. The protest has become the longest-running blockade against logging in Canadian history.

In 2007 the province suspended industrial logging in the area. In 2018, Grassy Narrows declared sovereignty over the area and banned clear-cut logging outright: “Our sovereignty and our rights have been repeatedly violated by harmful decisions forced on our people by government and industry,” noted the declaration.

After a junior uranium mining company and the Ontario government failed to meet expectations on consultation, the KI First Nation said “no” to further development on its traditional lands. The company sued the nation for $10 billion and sought a court injunction. After Chief Donny Morris and five other protesters prevented company workers from landing at a remote airstrip north of Thunder Bay, they were arrested and sentenced to six months in jail.

The government of Ontario eventually paid the company $5 million to abandon its claims and reformed the archaic Mining Act to include aboriginal consultation.

Throughout the summer of 2013, the Elsipogtog First Nation protested exploratory shale gas drilling on its land by Texas-based Southwestern Energy. The nation argued that under the Peace and Friendship Treaties of 1760/61 the Mi’kmaq and the Maliseet signatories had not surrendered rights to lands or resources. In addition the nation regarded the fracking of shale resources as a threat to its water supplies.

Early in 2013, the RCMP, the energy company, the New Brunswick government and the J.D. Irving-owned Industrial Security put together an “integrated approach” to prevent anti-shale gas protests from spreading across the county.

On Oct. 17 scores of heavily armed RCMP moved to enforce a court injunction against a road blockade that resulted in a violent melee. Six vehicles were burned and more than 40 protesters were arrested. More than 100 people had been arrested by the end of 2013. 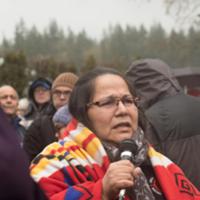 Judy Wilson’s Message for Canadians: ‘The Land Defenders Are Doing This for Everybody’

“When the dust cleared… after the whole takedown… it was dark, gloomy, it looked like a war just happened. It felt like we were in a different country,” recalled former Elsipogtog chief Susan Levi-Peters to the CBC last year. “What authority does the government have to molest our land without even consulting with us or getting any consent from us?”

Since the shale gas battle the Elsipogtog have filed for aboriginal title to nearly one-third of New Brunswick on behalf of the province’s Mi’kmaq. The government declared a moratorium on fracking but now appears poised to lift that ban.

After the government of Newfoundland ignored concerns about methylmercury pollution and safety at the proposed Muskrat Falls dam, nearly a hundred people occupied the worksite in 2016. As soon as the Crown agency building the dam got a court injunction, the RCMP started to arrest protestors. When Marjorie Flowers, an Inuk mother defending her people’s traditional foods and way of life, refused to obey the court order she was sent to a men’s prison in St. John’s, Newfoundland for 10 days and then placed under house arrest for another 30 days.**

In 2017 the Newfoundland government promised to monitor and study mercury pollution.

In a massive security operation, dubbed Project Beltway, the RCMP assembled between 80 and 140 officers from across Atlantic Canada to protect the movement of transformers to the dam site from Cartwright to Happy Valley-Goose Bay. The Canadian military also assisted by providing meals and lodging.

The massive dam, which went over budget and over schedule, is now the subject of a major public inquiry.