When British Columbians elected their first ever New Democrat government, then-party leader Dave Barrett walked into the premier’s office on a tightrope.

It was 1972, and anti-communist paranoia was seeping out of the legislative press gallery, the Vancouver Club and other halls of power. Barrett was convinced that the CIA had its eyes on Victoria. The clock was ticking — the NDP benefited from a divided right that would soon regroup under the Social Credit Party — so Barrett posed his famous question to the newly-sworn cabinet: “Are we here for a good time, or a long time?”

Though it was only a good time, the NDP administration of 1972 to 1975 is remembered fondly for passing more consequential legislation in three years than any government before or since, with ICBC, pharmacare and the Agricultural Land Reserve as some of its legacies.

On the other hand, as then-cabinet minister Norman Levi later said, “... you’re only a good government if you’re in government, and three years, three months and two days is not really much experience as government.”

Today there is a sense within the left that the NDP could unleash a governing style fitting its socialist history and its still-radical base, but not until a majority is won, the party brass says, not until the economy is just right.

Not to pull a “If this Man Kicked a Dog” on the man who has served as premier for three years and three months to this week, but John Horgan will likely win his majority. With an expanded mandate and no Green party to temper it, would this NDP government have the confidence to out-do Barrett and implement bold, transformative and left-wing policies that benefit the many and not just the few?

In fact, we’ve already seen what the NDP will do when it has the room and authority to govern on its own. In March 2020, as the sky was falling and scenes from Italian and Iranian hospitals poured forth, British Columbians waited anxiously. When B.C. first faced the COVID-19 pandemic, the stakes of the moment meant that neither the Greens nor the BC Liberals could afford to step in the way of a crisis to push their own agenda. The political capital was available to ensure that people, particularly the most vulnerable, were safe. What did the social democratic NDP do with a majority in all but name?

At a time when provincial health officer Dr. Bonnie Henry urged us all to stay home, the government instituted staggeringly weak renter protections that forced many to choose between keeping their health or staying housed, and any of the little money promised to renters in the form of the temporary rental supplement went directly to landlords. The supplement ended Aug. 31 and B.C.’s moratorium on evictions Sept. 1.

Rather than cancel rents and mortgage payments, the NDP facilitated an immense transfer of wealth to landlords. Twenty-eight per cent of written responses in surveys by the Vancouver Tenants Union reported renters going hungry or skipping meals to pay their bills, with some cashing out RRSPs among other sacrifices, and 88 per cent of those who answered a question about mental health reported experiencing “new or worsening mental health conditions” as a result.

Worse than that was the treatment of those legislated into poverty. Rather than listen to anti-poverty experts, in May the province uprooted over 600 people from places like Oppenheimer Park in Vancouver and Pandora Avenue in Victoria, removing them from conditions that some advocates say may be safer not only from COVID-19, but also from the risk of overdose death.

After pushing people from the camps, the province put up spiked fences around Oppenheimer Park and failed to seriously provide a safe supply of drugs, and more and more people died of drug overdoses. (After a number of historically deadly months for overdoses and right before the election call, the NDP promised an expansion to safe supply programs, the details of which remain to be seen.)

This was an NDP with a lot of political capital, and the best they could do was uproot low-income people, as well as redistribute the income of working and underserved people into the pockets of the wealthy.

The party could have used the moment to pass major crisis spending bills and raise taxes on the wealthy to not only pay for the crisis, but to bring the province back from austerity measures from the BC Liberals’ 16 years in power. That spending could include building out transit and quality public housing, creating new constituencies that would remember the NDP’s actions for generations to come.

This all happened in a minority government situation. But could a few new faces move the party to the left?

If you’re an NDP partisan who witnessed Horgan recruit heavy hitters from federal politics such as Fin Donnelly, Nathan Cullen and Murray Rankin, your eyes may have fluttered at the star power and implications for the party’s seat totals. But while these former opposition MPs were inspirations in fighting federal governments for subsidizing fossil fuels and invading Indigenous land in opposition, it isn’t clear how progressive they will be in power.

Cullen is an interesting figure to watch here. Earlier this year he was chosen by fellow New Democrat Horgan to be a liaison between the province and the Wet’suwet’en hereditary chiefs as the RCMP invaded the territory to enforce a BC Supreme Court injunction on behalf of LNG pipeline company Coastal GasLink. He joined Horgan’s election campaign not long after his job was done.

To some, this might suggest Cullen could be a voice pushing Horgan towards respecting sovereignty. However, Cullen joined Rankin at a party convention in 2018 in silencing discussions that were supportive of Palestine’s struggle under apartheid, an issue that legal scholars like Brenna Bhandar place side-by-side with the Wet’suwet’en invasion as deeply connected.

Parties are complex, and within the NDP caucus, there exists a divide between moderate, older and largely white legislators versus a newer, younger crop who push harder on climate change, anti-poverty, racial and sexual justice, and in favour of Indigenous rights.

Given the sudden addition of heavy hitters who resemble the first group more than the second, I am concerned that the younger, more progressive crop will be elbowed out just as they were gaining steam. On top of this is a likely newer crop of NDP MLAs squeaking in from ridings that might be tough to hold in the next election, likely leading them to temper the party’s leftward tack or else risk their jobs.

The current staff in the premier’s office apparently plan to stay for at least a decade, seen as necessary to undo 16 years of BC Liberal austerity. Staffers aim to reach the supposed goal of a Nordic-style social democracy. But that means not rocking the boat (that’s Victoria-speak for continuing to ignore the demands of the unhoused, invading legally sovereign Indigenous land, and letting thousands die of overdose).

Political capital isn’t something you put on a shelf to admire. It is to be used. Gordon Campbell knew this in 2002 when his BC Liberals did what any right-wing party does with enough room to do it: they drastically cut taxes, eliminated whole social programs and privatized public utilities into the hands of their donors in a fell swoop dubbed “Black Thursday.”

The NDP could use this opportunity to implement a progressive vision instead. There isn’t much reason to believe they will. Remember that Horgan, when pressed on why he needed a majority, explained that he had this epiphany when the Greens (alongside the BC Representative for Children and Youth) resisted his government’s effort to detain minors who suffered from overdoses. Stories like this tell me that the Green party wasn’t standing in the way of progressive policy, and I’m not sure who the NDP will use as a scapegoat if they get their majority. 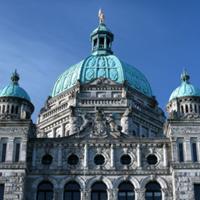 A Word to Progressives Who Want to Punish the NDP

Expect the New Democrats to go deeper on fossil fuel subsidies, LNG and Site C. Expect them to continue favouring landlords over the renters who pay their mortgages. Expect them to further invade legally sovereign Indigenous land with the RCMP playing the role of shocktroopers. Expect them to dangle a few social programs here and there.

And when progressive voices feel left behind, expect the NDP to point to the Jason Kenney and Doug Ford governments in Alberta and Ontario as flattering comparisons, demanding that we swallow the lesser evil.

By the end of Dave Barrett’s government, his base — including the militant labour unions who carried him into the premier’s office — found plenty of legitimate reasons to feel dissatisfied by those three years in power.

Nevertheless, as we live through a triple crisis of housing, drugs and public health, British Columbians cannot afford any less than the bravery and speed of the 1970s BC NDP in pushing through lasting, transformative policies that benefited the many over the few.