During the hour that it took the world's elite G7 politicians discussing climate change to wander through an enchanting meadow of flowers in Germany's Bavarian Alps earlier this week, at least 800 people died prematurely from the impact of air pollution, most of it caused by the burning of non-renewable fossil fuels. 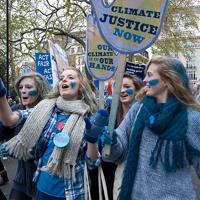 On Climate Change, the Generation Gap Is Widening

Wanting to show the world -- particularly voters at home -- that they care about the seven-million people a year dying from various pollution and carbon related causes, the leaders of the world's richest countries, including Canada, signed a joint declaration calling for a global phasing-out of fossil fuels 85 years from now.

It's unlikely that, during their deliberations in the picturesque Schloss Elmau at the foot of Germany's highest mountain, anyone at the summit reflected on the World Health Organization's (WHO) report of a year ago that said in 2012 around seven million people died -- one in eight of total global deaths -- as a result of air pollution exposure.

Unfortunately, despite positive coverage in mainstream media in several countries, the section of the summit dealing with climate change must be considered an over-blown failure.

German Chancellor Angela Merkel was disappointed that G7 members -- largely because of opposition from Canada and Japan -- wouldn't agree to a commitment to a low-carbon economy by 2050. Instead, the G7 agreed to what it called a full-blown, no-carbon economy, but not until 2100.

According to their declaration, the G7 countries say they intend to insist on greenhouse gas reductions of at least in the upper 40 to 70 per cent range by 2050. There's also a promise to cut emission by 17 per cent by 2020. But, despite the tough talk, no nation-specific targets were set, and the G7 declaration is not binding.

Canada, living up to its reputation as the world's leading foot dragger on climate issues, balked at Merkel's earlier proposal that G7 countries would eliminate carbon emissions by 2050.

Prime Minister Stephen Harper, who rejects scientific information on the threat of global warming, said Canada would reach the G7 targets through developing new technologies, not by reducing living standards.

Meanwhile, the G7 countries -- in a farcical display of public relations -- agreed on a binding two-degree target for limiting global warming. Again, no timeframe was set, but the G7 group will take their declaration with them to Paris in December for the crucial UN Climate Summit.

Had they been more concerned about the hardship people around their world are experiencing -- including people in some of their own countries -- perhaps the summit would have taken a more realistic, more dynamic approach to tackling the world's most pressing problem.

Environmental groups were divided in their opinions of the summit.

Christoph Bals from the NGO Germanwatch said "the summit sends a strong signal for a successful climate agreement at the end of the year in Paris."

But the development organization Oxfam said the outcome was inadequate. "If the G7 really want to implement their decisions, they must take concrete measures -- such as promptly initiating a phase-out of harmful coal," said Oxfam climate protection analyst Jan Kowalzig.

"Coal is the biggest single cause of climate change," says Oxfam, "yet the G7 countries are still burning huge amounts, despite efficient, affordable, renewable alternatives being available. G7 coal power stations emit twice as much fossil fuel CO2 as the whole of Africa, and their contribution to global warming will cost Africa alone more than $43-billion per year by the 2080s."

In addition, despite their bold talk in Germany, G7 countries have pledged US$8 billion per year in subsidies to expand fossil fuel production. This runs totally contrary to their claimed emission commitment positions.

In view of the lack of real commitment to fighting climate change by the world's most powerful nations, holding global warming to two degrees appears to be a monumental challenge.

In fact, expectations for a successful outcome in Paris have been waning, as even some of those responsible for organizing the Summit are concerned.

If the planet is to avoid large increases in global warming, massive actions never before accomplished by humankind will be necessary.

No doubt some progress will be made but, according to the independent Climate Action Tracker, the world's current policies would result in global warming of 3.6 to 4.2 degrees Celsius by 2100. Even the current pledges of the G7 countries, if converted into effective policies, probably would not be enough for the world to stay under the target of keeping warming to two degrees Celsius.