In an Alberta general-election campaign with many memorable moments, one arguably stood out from the rest. 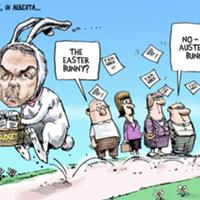 "I know that math is difficult," Jim Prentice, leader of the then-governing Progressive Conservatives, chastised Rachel Notley, leader of the New Democratic Party, in an exchange during the April 23 televised leaders' debate.

The pair was sparring over a NDP election-platform pledge to raise the province's corporate-income tax rate to 12 per cent, up from 10.

To Notley and the New Democrats, this represented a reasonable, two-point tax increase to generate an additional $805 million in the current fiscal year (and more thereafter).

Those new monies were earmarked in the NDP platform for the removal of imposts -- user fees and a health-care levy -- introduced by the Progressive Conservatives in their pre-election budget, as well as public programs.

To Prentice and his Tories, however, the proposed tax increase constituted a dangerous 20 per cent hike -- two percentage points is 20 per cent of the existing 10 per cent rate -- certain to kill private-sector investment and job creation.

Prentice's "math is difficult" jibe provoked an immediate firestorm of commentary, with observations of "disrespectful," "condescending" and yes, "sexist."

Lost in the hubbub was a serious examination of the merit of a raise in Alberta's corporate tax rate.

Now, following Notley's and the New Democrats' stunning election victory -- and equally shocking rejection of Prentice's Tories after 43 years in government -- it is evident that a significant number of Albertans were unconcerned by, or even supportive of, an increase in the tax on corporate profits.

With a federal election looming on October 19, moreover, corporate profits and taxes are certain to be a contentious topic for debate in the weeks and months ahead.

Two parallel but unrelated developments have taken place across Canada in recent decades with regards to corporation profits and taxes.

The first has seen a noteworthy increase in business earnings, while the second is an ongoing reduction in corporate income tax rates.

Simply, as business profits have risen ever higher, the tax rates on those earnings have fallen ever lower.

This seems like a substantial increase -- and it is, unquestionably. Yet over the same period of time the country's nominal GDP rose from $366.6 billion to $1.98 trillion.

Clearly, corporation profits and Canada's economy -- as well as wages and salaries, which over the same period grew from $179.7 billion to $857.7 billion -- have climbed significantly since the early 1980s.

The upward trajectory of these numbers may be attributed to economic expansion, as well as the effects of inflation and population growth.

Is it possible to isolate and objectively measure corporation profits over recent decades?

One such way is to examine them as a share of nominal GDP.

They then plunged early in the next decade, collapsing to a nadir of just 7.6 per cent in 1992.

Between 1994 until the end of the century, however, corporation profits recovered nicely and in 2000 reached a then record of 14.4 per cent of GDP.

The 21st century has been good to Canada, in large part because of the worldwide commodity boom sparked by the phenomenal economic rise of China.

Generally-speaking, Canada's private sector has performed exceptionally well through most of this period, and in 2005 corporation profits reached a whopping 17.1 per cent of the country's economy.

The global financial meltdown of 2008/09 caused both Canada's GDP and business earnings to drop, although -- seen with the benefit of hindsight -- not as badly as once had been feared.

And over the last five years, business earnings have recovered nicely. In 2014, they rang in at a solid 14.1 per cent of GDP.

Before looking at the second-half of the equation -- corporate income tax rates -- let's quickly look at business earnings in three provinces.

As might be expected, in Ontario -- which accounts for about 37 per cent of Canada's economy -- corporation profits as a proportion of provincial GDP closely track those for the country as a whole.

Ontario's business earnings since the early 1980s, however, always have been less than the national average. The same situation prevails in British Columbia.

Naturally, if those two provinces -- which together represent roughly half of Canada's economy -- consistently come in below the national average, some other provinces must enjoy above-average corporate earnings.

It is not surprising that Alberta is one such province. From 2001 to 2013, business profits averaged an eye-popping 21.0 per cent of provincial GDP.

Looked at from a national perspective, Alberta has 11.6 per cent of the country's population, produces 17.9 per cent of Canada's GDP, and boasts an incredible 22.9 per cent of business profits.

Corporation income taxes in Canada peaked in the late 1980s, and since then have gone into a remarkable swoon.

In 1949, to pick a single year in the post-war period, the combined federal and provincial tax rate for businesses in every province but two was 38 per cent. (In Ontario and Quebec it was an even 40 per cent.)

Corporate tax rates rose unevenly over the next several decades across all provinces. To arbitrarily pick another year, 1986, in B.C. the combined rate (federal and provincial) was 53.8 per cent; in Alberta, 48.8 per cent; in Saskatchewan, 54.8 per cent; and in Ontario, 53.3 per cent.

By the late 1990s and early 2000s, efforts got underway in Ottawa and many provinces to whittle-down business taxes.

Between 2000 and 2006, Liberal governments under Jean Chr&eacutetien and Paul Martin cut the federal corporation income tax rate from 28 to 21 per cent.

Stephen Harper's Conservatives soon cut further to 15 per cent, and actively worked to persuade the provinces to move down to 10 -- thereby making a combined, nationwide rate of 25 per cent.

Some provinces, notably British Columbia under Gordon Campbell's BC Liberals, already were on that path.

Inheriting a 16.5 per cent corporate tax rate in 2001, Campbell whacked three points within weeks of being sworn into office. That was followed in 2005 with a reduction to an even 12 per cent rate, and by 2011 it was at 10 per cent (although later raised again in 2013 to its current 11 per cent).

In Alberta, the business income tax rate was slashed from 15.5 to 13.5 per cent in 2001 by Ralph Klein and his Progressive Conservative government. Further reductions brought it down to 10 per cent in 2006.

Today, the combined federal and provincial corporate income tax rate in Alberta is 25 per cent. Soon, Premier Rachel Notley and her new NDP government will hike it to 27 per cent.

It's an affordable increase and unlikely to wreck a provincial economy -- especially that of Alberta where private sector profits over the last several decades have been among the strongest in the country.

Former premier Jim Prentice, it now is evident, was wrong on many counts. For one, math is not at all difficult, especially when you carefully examine the numbers.