When writer Richard Starr approached Jim Lorimer with an idea for a book about federal transfer payments, Lorimer, the president of Formac Publishing, "wasn't totally enamored with the idea of trying to sell a book to Canadians about equalization." He admitted this to a modest, multi-generational audience on Sept. 4, at the Halifax launch of the book he eventually agreed to take on -- a decision he now believes was the right one. 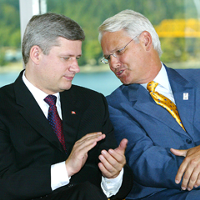 Starr's book, Equal as Citizens: The tumultuous and troubled history of a great Canadian idea, details the emergence and evolution of Canada's equalization program -- the "arcane" yet surprisingly straightforward system by which the federal government collects a bit more in taxes than it needs to cover its own costs, and pays the surplus revenue back to the provinces so that they can afford public services for their citizens.

The crowd that gathered to celebrate and discuss Starr's latest work was most concerned with its central paradox. On the one hand, as Starr writes, few ordinary people "openly challenge the notion of equal citizenship or argue that there should be different classes of public services available to Canadians depending on the province where they live."

But on the other hand, Canadians from every province seem to have bought into the idea that it's shameful and unfair that some "have-not" provinces -- the Atlantic region in particular -- are allowed to leach off the successes of wealthier ones.

As Starr's research reveals, this contradictory thinking has troubled the Canadian federation from the outset. At certain times, the commitment to equity among the provinces has won out. It did when the equalization program we have today was introduced in 1937. It was further strengthened in 1982, when it was written into the constitution that the federal and provincial governments should ensure "reasonably comparable public services at reasonably comparable levels of taxation" across all provinces.

Summarizing over a century of federal-provincial fiscal relations from the 1860s to the 1982 constitution, Starr writes: "Canada was formed from a union of provinces with widely varying levels of wealth. For a time, we seemed to accept the idea that the level of public services in each province should be dictated by the level of wealth. But we eventually rejected that ungenerous way of thinking and built a transfer system that strived to achieve equal citizenship."

And yet, a look at the historical parliamentary debates from the 1860s onward (available free and publicly on the Library of Parliament website) reveals that the stated commitment to equity did not come easy. For a century and a half, politicians have squabbled over the definitions of "need" and "equality" and debated the intrinsic fairness of a system that seems to take money from one province and give it to another. Moreover, Starr's research suggests that the "generous" equalization program agreed to in principle has gradually been eroded and transformed into one that effectively rewards the provinces that are already better off.

Indeed, federal transfer payments, just like regional development agencies, have been challenged at every turn by wealthier provinces that claim they are either fundamentally unfair or harmful to receiving provinces. Mirroring the arguments against individual welfare, critics of equalization argue that payments create "dependency" among the poorer provinces -- that they are "the help that hurts," hampering provincial and individual entrepreneurialism and initiative.

But instead of seeking to abolish either equalization payments or regional development bodies, wealthier provinces have historically argued that they, too, should be entitled to payments and development agencies. Partly as a result of such pressure, according to Canada's Parliamentary Budget Officer, Alberta, the country's richest province, now benefits most from federal transfer payments.

Starr's book is full of examples of startling provincial inequities in public services and taxation -- gaps that, no matter how one feels about federal transfer payments, are undeniably at odds with the constitutional commitment made in 1982. Take, for example, a person with an average income and a medical condition with a $20,000/year drug bill. That person would pay "nothing" in "Nunavut or the Northwest Territories; about $800 in Alberta; $1,500 in Quebec; about $3,000 in [...] Ontario, Manitoba and British Columbia; more than $8,000 in Saskatchewan and Newfoundland; $11,000 in Nova Scotia; and the full $20,000 in Prince Edward Island and New Brunswick."

Starr goes on to detail astonishing disparities in spending per capita, services offered, and service costs, for people with Autism or Diabetes, or people who need knee and hip replacement surgeries. In most cases, Albertans come out on top, and the Atlantic Provinces fall significantly short. Recent changes to the way the provinces' health transfer payments are calculated -- moving the Canada Health Transfer system to a "per capita" formula -- mean that provinces such as Nova Scotia's, with ageing and shrinking populations and rising health care costs, will soon receive less health funding from the feds than provinces with growing, youthful and healthier populations.

It is twisted developments and shocking inequities like the ones listed above that make Jim Lorimer believe a change is coming. He and others at the book launch predict an "explosion" of concern around provincial inequality, but they believe it will need some "crystallizing event" to transpire.

"We've been beaten down" into believing that a commitment to equity is an acceptance of dependency, says Starr. But sooner or later, he and others hope Canadians will realize that "it isn't fair. And it isn't right" that access to public services varies so much from province to province.

At the very least, Starr is hopeful that all provinces, even the wealthiest ones, will recognize that it is in their own "self-interest" to ensure reasonable comparability in taxation and services across the country.