I confess. I have been binge-watching TV series. Lately I have narrowed my watching mostly to The West Wing, an old favourite about a Democratic president, Jed Bartlet, portraying the manic, day-to-day crisis management of the White House. But in my defence I am doing so in part as an antidote to another series I quit watching because the values it displayed and promoted were so execrable. The award-winning House of Cards stars Kevin Spacey as a ruthless congressman seeking revenge (and higher office) for being betrayed by "his" president. Both these series are exceptionally well-written and well-acted. But one actually features characters who are trying to accomplish laudable social objectives (for the most part) and who treat each other with genuine respect and even affection. House of Cards never allows such sentiment to prevail or even appear, except as a reflection of weakness and naivete. It's all about varying degrees of ruthlessness and we are clearly supposed to admire Spacey as a masterful practitioner of the Machiavellian arts. 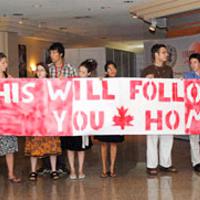 Of course House of Cards is not the only series people are bingeing on. There is another popular series praised for its high production values, writing and its atmospheric tone. The "hero" is Walt, a high school chemistry teacher who starts dabbling in meth production and then gets deeper and deeper into the murderous meth business. He may be the only TV hero who is a psychopathic killer. I quit watching this one after the episode in which he orders the murders of nine convicts who could expose his role.

People who are addicted to this series manage, somehow, to rationalize their attraction by referring to how incredibly well produced and acted it is. I don't care how well acted it is. It is grotesque, a vehicle for gratuitous violence and the demeaning of life, an assault on human sensibility. My advice -- which no one will take -- is to spend a few minutes asking yourself what a celebration of murderous psychopathy might be doing to your own mental state. While you are at it ask yourself what your limits are: what level of human depravity exploration would finally compel you to switch channels?

I don't know if watching such series actually does any lasting epigenetic damage but an appeal to simple self-respect and social consciousness should be enough to launch a boycott of this ugly entertainment. Why? Because this sick amorality isn't just on TV. It is everywhere -- in too many politicians (Stephen Harper, Tony Blair, Benjamin Netanyahu, Dick Cheney come to mind), too many CEOs, and if you watched The Wolf of Wall Street (all of which was based on true accounts) virtually all of Wall Street, and in too many of our institutions (like the RCMP). And it's now in popular non-fiction literature and on the internet.

As reported recently by Canadian author Patricia Pearson: "The celebration of remorselessness is everywhere. Friends on Facebook have lately been reporting their scores on widely circulating psychopathy quizzes that ask users to agree or disagree with statements such as, 'I never feel remorse, shame or guilt about something I've said or done.' 'I'm 19 per cent psychopath!' they announce. Or: 'I scored five out of 10!' As if the chilling absence of human empathy I witnessed as a crime reporter in covering trials like that of serial killer Paul Bernardo had become a fun little personality quirk."

James Fallon, the author of The Psychopath Inside actually refers to himself as a pro-social psychopath "who chooses not to murder people even though, admittedly, he cares not one whit if he harms them in other ways."

How is it possible that this idiocy passes for rational, acceptable narrative? Pearson rightly asks "What fire, exactly, are we playing with? Have we taken a tolerance of difference, of identity, of moral relativism, too far? ... The issue, fundamentally, is moral. What kind of a society do we wish to inhabit, with what kinds of leaders and heroes?"

Pearson quotes Adam Kotsko, author of Why We Love Sociopaths: A Guide to Late Capitalist Television: "People enjoy watching sociopaths on television as a kind of compensation for their own feelings of powerlessness and helplessness." Now we're getting closer to the root of the problem: the inexorable imposition of capitalist social relations. What is the source of the average person's "powerless and helplessness" if not the hyper-competitiveness of late capitalism? It's a competitiveness in which almost all but the One Per cent lose -- with tax cuts, privilege and ever-increasing wealth accumulation fixing the game.

Race to the moral bottom

The stronger the imperative to compete, the weaker become family, community and friendship connections, because in rampant consumer capitalism -- promoted and reinforced by television culture -- such connections are seen as irrelevant. Or worse, they are seen as weak and inefficient means, if not actual barriers, to the end of achieving more stuff. We are competing in a zero-sum game whose rules are written by those with psychopathic tendencies. As Fred Guerin writes in Truthout, "Obedience, docility, amorality and careerism will be duly rewarded. Those who can regularly suspend any desire they have to think from the perspective of another, or on behalf of a more universal or common good will be promoted."

Guerin is getting at the real roots of our crisis in democracy. It is not first-past-the-post voting systems, or the cancellation of government funding for parties, or even the role of TV advertising. It is at its core our gradual acquiescence "to things that are contrary to our individual and communal interests." This acquiescence, say Guerin, is the "consequence of very gradual political and corporate indoctrination that consolidates power not only by inducing fear and uncertainty, but also by rewarding unbridled greed, opportunism and self-interest."

Is there an antidote to this death-culture? Can we reclaim our capacity to think beyond our immediate self-interest and regain our political agency -- our ability to act as citizens and not just consumers? Can we begin to create a shared space where we can actually imagine a future worth having, talk about big ideas and recover the notion that we can act in concert for the broader good?

It comes down to the question of political agency. So perhaps the more important question is not what should be done but who is going to do it? Our gradual accommodation to the new and enervating normal means that none of our existing institutions are now capable of engineering this recovery. They are spent forces fighting on the edges of the battle.

If that is the case where do we start? While it is naive to suggest that individual action will bring down corporate capitalism it is obvious to anyone not distracted by the shopping mall that it must be ended -- or it will destroy life on this planet. So perhaps we do need to start at the political equivalent of the molecular level, with the most basic human principles that provide us with the capacity to resist, to act in concert, to get beyond our possessive individualism. What is it, for example, that causes otherwise consumption-addled North Americans to suddenly demonstrate generosity, compassion, and benevolence when confronted by the aftermath of some natural disaster like a flood or tornado? What is missing in everyday life without disaster that allows us to acquiesce to things that do us great harm?

Kindness and its enemies

British writer Barbara Taylor has suggested in her essay "On Kindness" (co-authored by Adam Phillips) that the missing ingredient is just that: kindness. The authors point out that for almost all of human history, people considered themselves naturally kind. Christian philosophy called on people to "love thy neighbour as thyself." But by the 17th century kindness was under attack by competitive individualism. Today, says Taylor, "An image of self has been created that is utterly lacking in natural generosity." This is in spite of numerous studies that show giving provides far more pleasure than taking. People involved in these studies are astonished by the results -- and simply don't trust them.

The recovery of kindness would be a threat to the existing order. That is because "it is not that real kindness requires people to be selfless, it is rather than real kindness changes people in the doing of it, often in unpredictable ways.... It is a risk precisely because it mingles our needs and desires with the needs and desires of others in a way that self-interest never can." Could this be the key to recovering what Guerin referred to as "possibility and human creativity"? Taylor clearly thinks so, as the kindness she is talking about "creates the kind of intimacy, the kind of involvement with other people that we both fear and crave;... kindness, fundamentally, makes life worth living... everything that is against kindness is against hope."

Kindness, or "mutual belonging," has become our great taboo. It hangs on by the skin of its teeth in the imperative to carry out "random acts of kindness." Instead, let's try purposive acts of kindness. Challenge competitive individualism and begin imagining the end of capitalism.