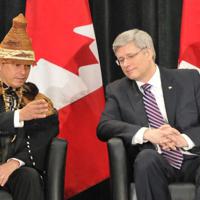 Hard to believe that a struggle over who owns the land since the first explorers arrived on the West Coast took this long to resolve. The Calder case in 1973 and the Delgamuukw in 1997 did not have a definitive ruling on title. After a legal battle that lasted 12 years, Aboriginal title was proclaimed for the Tsilhqot'in people.

This case is not everything First Nations want -- but what court case ever is? First Nations still have the onus of proving title instead of Canada having to prove how it took First Nations lands legally. (It was not by war, treaty, discovery or terra nullius --what's left?)

Still, this a strong judgment that will help First Nations resolve many issues and provide greater bargaining power than they ever had before. This case is about one Nation with five bands on a part of their territory and does not include private land. This still leaves 190 First Nations that have aboriginal title that has yet to be resolved.

Here are five questions last week's decision raises in many minds, particularly among business people, and some perspective on each.

1. What does aboriginal title mean?

Aboriginal title means that the First Nation holds an exclusive right to decide how to use and control the land, to benefit from those uses. It includes the right to possess, enjoy and occupy the land. Aboriginal title holders of modern times can use their lands in modern ways, that is their choice.

The only restrictions on aboriginal title is that it is a collective right of all the people and must be treated as such. This means, for example, that chief and council could not sell the land or consent to a development that affects their people's rights without going to the people for their consent. And, the land must be used in such a way that does not deprive future generations of the benefit of the land.

This is an interesting duty that is placed on the Crown as part of their fiduciary obligation to First Nations people that the land and resources must be used so that it can be enjoyed by future generations. For non-renewable resources, this means that things like liquid natural gas cannot be taken from the ground immediately or over ten years, but must be available for future generations. If there is a mine, it cannot take all the minerals. As far as the land goes, the land cannot be alienated fully, or altered in such a way so that future generations of First Nations people cannot exercise their rights or enjoy the lands and the benefits that flow from it.

This means the governments are going to have to do more long range planning on the uses of land and scale development over time.

The court was clear that when aboriginal title has been proved as the Tsilhqot'in have, that First Nation must consent to any development on their lands.

If they do not consent to the development, the governments must follow a stringent three pronged test for a project to go ahead:

• Fully follow its procedural duty to consult and accommodate

• The proposed action must be compelling and substantial objectives and these objectives must be done from the aboriginal perspective as well as the government.

• Must be consistent with their fiduciary obligations and within the framework of s. 35 requirements -- meaning there must be minimal impairment to aboriginal interests and that the interest of First Nations inheres to present and future generations. There must be a principled reconciliation of aboriginal rights with the interest of all Canadians.

What does all that mean? If no consent is obtained from the Tsilhqot'in, the government can only proceed if their duty to consult and accommodate has been carried out properly. If a court states that consultation and accommodation has been inadequate, the government decision can be suspended, quashed or damages awarded. Very serious implications.

The Crown also has to reassess its prior conduct and may have to cancel projects if the continuation of the project unjustifiably infringes title. Also the Crown may have to amend their laws or will their laws may be found inapplicable if it infringes aboriginal title.

3. Must consent be gained from First Nations that have not proven title?

For First Nations in B.C. who have not yet proved title in court, the Crown owes a procedural duty imposed by the Honour of the Crown to consult and accommodate the unproven aboriginal interests. What has changed with the Tsilhqot'in decision is that aboriginal title is now a reality that the governments must now recognize and act appropriately with that title in mind.

The Chief Justice had this advice to give:

"I add this. Governments and individuals proposing to use or exploit land, whether before of after a declaration of Aboriginal title, can avoid a charge of infringement or failure to adequately consult by obtaining the consent of the interested Aboriginal group." (paragraph 97 Tsilhqot'in decision.)

Powerful words of advice to governments and business: you may as well get the consent of First Nations before you do a project.

4. Will this decision visit 'chaos' on B.C. business dealings?

The sky is not falling and this is not a dark day for the economy of B.C. as Gordon Gibson's opinion piece in The Globe and Mail said. Further his predictions of chaotic jockeying between First Nations, governments and companies and that deals will freeze until things are sorted out are ridiculous and avoidable.

Generally, if you plan to do business in a First Nations territory, go see the First Nation at the very early stages, before any planning is done. Discover whether the area you want to develop is in an area that the First Nation will never develop. Do not proceed if the First Nation will not agree to the area. If it is not in such an area, talk about the project, what you want to do and find out what First Nations interests are in the area. See if you can get an agreement to explore the proposed project, what studies need to be done, how it can be approached. Studies should focus on impacts to rights and how and if they can be avoided or mitigated. Only once all the concerns have been met, you can start talking about moving the project ahead if the First Nation is okay with it. Get agreement at every stage. Include the community members. Acknowledge the title of the First Nation and their ability to consent to project -- this will build relations and enable you to carry out your work in a respectful manner.

Work to understand the laws, protocols and culture that dictates the way the First Nation does business and follow those laws. You are dealing with a new jurisdiction and you need to understand it, just like you do with provincial and federal laws.

It is so important to work with First Nations and develop a project together from the ground up. If you haven't been doing this, this is where you have gone wrong. Post Tsilhqot'in this is a must. If you do things in this way, get the First Nations consent within their laws and protocols, do business within their cultural and environmental standards, and do it in a way that benefits the community in a meaningful way that the community determines, business can proceed.

I must say that I had to scoff at Gordon Gibson when he said that "It is the duty of governments to facilitate the development of the economy, and they are going to have to firmly lay down rules that all parties will be able to rely upon. Governments have been politically frightened of aboriginal peoples since Oka, but they still have a duty to the general public." This is exactly the formula for how not to succeed. This is not a unilateral process in which the government lays down the rules. That is what brings failure and a collapse of projects. Tsilhqot'in means you need to work with and obtain the consent of First Nations people. First Nations peoples are not to be feared, but valued for their role in this country.

Companies, this means you start with the First Nation, treat them like the governments they are, respect their jurisdictions, rights and title. Business can proceed, just in a different way than you have been used to.

Following Tsilqot'in I wonder if the federal and provincial governments regret having been so limited with treaty mandates, not providing more lands and resources in their offers and recognizing the inherent right to self government. Now that those governments are faced with the fact that a minimum of 50 per cent and maximum of 100 per cent of B.C. are aboriginal title lands, maybe their thought processes can change.

If Enbridge, Kinder Morgan and other projects don't go ahead, governments have to blame themselves.

First Nations long have been asserting their rights. They have been negotiating treaties for 20 years and trying to negotiate other solutions, only to be rebuffed by the paternalistic, colonial mentality that do not allow for viable solutions. So many issues could have been resolved years ago with the political will necessary to conclude treaties. When you look at how little the concluded treaties provided in the way of lands and resources, you now know why there are so few concluded treaties as First Nations have always known the strength of their title.