This week a B.C. man decided to take his cell phone horror story to the media after he reached $22,000 in data roaming fees when his 11-year-old son mistakenly turned off "airplane mode" on his cell phone. I wish I could say I was shocked, but after weeks of reading through the thousands of citizen submissions that Openmedia.ca received as part of its "Cell Phone Horror Stories" campaign, I've become somewhat numbed by the depth and variety of mistreatment that Canadians suffer at the hands of their service providers. 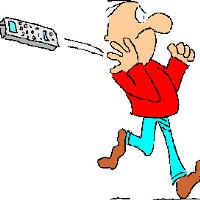 Legion of Cell Phone Resisters: Count Me in!

Matt Buie, the unfortunate recipient who was notified of the fees (later reduced), told a familiar story of service provider price-gouging, which is echoed in many of the citizen submissions that I read at OpenMedia.ca, alongside complaints of disrespectful customer service and restrictive contracts.*

The analysis of these citizen horror stories was released this week in a study entitled, Time for an Upgrade: Demanding Choice in Canada's Cell Phone Market. The results demonstrate that there is systemic mistreatment of cell phone users in Canada, and that frustrated citizens have few alternative options. Almost 94 per cent of the Canadian cell phone market is dominated by three incumbent providers -- Bell, Rogers, and Telus -- leaving customers feeling trapped in unhealthy relationships with their service providers.

The complaints OpenMedia.ca received were wide-ranging, and these experiences will be familiar to many: from the long hold times waiting for an unhelpful customer service rep to address the issue of unexpected charges showing up on a bill, to that sinking feeling as you realize that you'll have to put up with shoddy service for another year because paying a $600 termination fee to cancel your contract just isn't an option.

Then there are the more unusual circumstances, where all human compassion seems to go out the window in Big Telecom's relentless pursuit of their bottom line. There is the citizen who was unable to pay for her contract after a debilitating accident left her unable to work. She was told that in order to be released from her contract without penalty, "you would have needed to die."

Even in death, however, some service providers will continue to hold hapless Canadians to their now defunct contracts. One citizen story tells of how, after her husband passed away, she called her provider to cancel his cell phone service, and rather than being met with condolences she was promptly told she would have to pay a $200 early termination fee.

Other Canadians report that their service provider refused to work with them to find a solution to unexpected- and sometimes erroneous additional fees, instead passing the debt on to collections agencies who then hounded them -- and their relatives -- day and night. This occurred even in such extreme cases as those mentioned above, when any right-thinking person would make an exception.

And yet, even when confronted with these shocking realities at the recent recent CRTC hearing to create a National Code of Conduct for wireless service providers, Big Telecom kept its collective heads firmly buried in the sand.

Canadian Wireless Telecommunications Association President Bernard Lord asserted that customers stay with their wireless provider because they are so satisfied with the service. An equally laughable suggestion came from the president of Bell Mobility, Wade Oosterman, who proclaimed, "[c]onsumers have voted with their wallets: they prefer three-year contracts."

'They have no other choice'

Luckily CRTC Chair Jean-Pierre Blais was unconvinced by this puffery, and sided with Canadians and public interest groups in suggesting that "the reason [Canadians are] going to three years is not because they necessarily are choosing that. It's that, in fact, they have no other choice."

Real choice is one of the main priorities highlighted in OpenMedia.ca's study, along with reliable and respectful service, fair contracts, and transparency. While these demands might seem like no-brainers, or the basic standards you would expect from a service provider, citizen experiences have made it clear just how far short of these minimum expectations Big Telecom falls.

Time For An Upgrade demonstrates very clearly that real change is needed to free Canadians from decidedly unequal relationships with our service providers. The CRTC has taken an important step in this direction by establishing a National Code of Conduct, the results of which will be finalized in the coming months.

Industry Canada also has an opportunity to act now, as it faces a decision regarding Rogers Communications' plan to obtain key public spectrum resources that were explicitly set aside for new independent mobile options for Canadians. Now, unless Industry Canada intervenes, Rogers will grow even bigger, be able to increase prices, and guarantee that Canadians have only three mobile telecom giants to choose from.

Canadians are not taking this lying down, and the anger citizens feel towards their service providers as a result of the poor treatment they receive is clear throughout OpenMedia.ca's study. If it's not in Big Telecom's interests to listen, the CRTC and Industry Canada must step in to protect Canadian interests.

Time for an Upgrade: Demanding Choice in Canada's Cell Phone Market can be found here.