On the second of February, I attended a presentation at the Western Silvicultural Contractors' Association AGM in Kamloops. The presentation was made by Marvin Eng, a special investigator at the Forest Practices Board, who is tasked with clarifying the status and implications of "not satisfactorily re-stocked" (NSR) forest in British Columbia. Eng presented Phase 1 of the Forest Practices Board report. 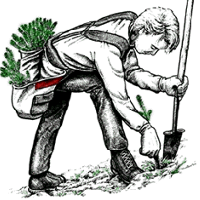 Who Will Revive BC's Forests?

The need for this investigation arises from questions and concerns in both the professional forester community and in the general public about our current knowledge of the state of British Columbia's public forests and the level of effort that is being made to ensure that disturbed forest lands are replanted.

Much of the discussion on this issue has been based on the exemplary work of a former senior forest professional with the BC Forest Service, Anthony Britneff, RPF (Ret.), who has published a number of articles on the state of B.C. forests, and has contended that the area of inadequately restocked or reforested land in British Columbia is today larger than at any point in the history of forest management in the province.

How do we define NSR? NSR is productive forest land that is not covered by a sufficient number of well-spaced trees of desirable species.

There are two types of NSR. The first, gross NSR, includes all NSR on forest lands in British Columbia that have originated from logging, fire, windstorm, disease or pests. Industry is required by law to reforest all land that it has logged, some small scale salvage operations excepted. The second, silviculture net NSR, is the portion of the gross NSR which is deemed to be both economical and practicable to replant.

In British Columbia, which is unique in that 90 per cent of the land base is publicly owned, we rely on our government to monitor the state of our forests and take action to ensure that forests damaged by natural events are returned to a healthy, productive state. But you would be surprised by just how little the government knows about our forest lands.

Over the last number of years, as the Opposition critic for Forestry, I have been in the position to question subsequent ministers of forests about the government's numbers on NSR. There have been a range of answers: assertions by the minister that the amount of silviculture net NSR is as low as 240,000 hectares, up to the begrudging admittance that it may be as high as 715,000 hectares.

But Britneff, based on 39 years of experience as a senior professional within the ministry in the inventory, silviculture and forest health programs, estimates the amount of silviculture net NSR to be in the order of 2 million hectares, a staggering number that should give every British Columbian reason for concern.

And now the Forest Practices Board, whose mandate is to serve the public interest as an independent watchdog for sound forest practices, has concurred with Britneff's numbers.

Getting the most benefit

Understanding and addressing NSR is absolutely critical to ensuring that we derive the greatest benefit possible from our public lands. Whether it be protecting the sustainability of forest-dependent communities, promoting water and soil health, or maximizing the benefits of healthy forests to mitigate the effects of climate change, we cannot proceed without a commitment from the stewards of our public lands to first establish a real measure of the crisis and then implement a rigorous effort to replant the forests where it is economical and practical to do so.

There was a time when a forest minister could make a phone call and have, within minutes, accurate numbers on both gross NSR and net silviculture NSR. It was with this level of understanding that strategic decisions could be made, and programs be developed to achieve measurable aims. But today's Ministry of Forests is hamstrung by a critical lack of current and reliable data, and of resources and specialized staff.

It was with measured intent in the early days of the BC Liberal government that specific steps were taken to remove responsibility for reforestation from government. They also deliberately removed the requirement for government to maintain an inventory of the forest lands for which it is responsible.

As a result, Annual Allowable Cut determinations, industry certification and our understanding of the forests' role in mitigating climate change are all based on numbers that have not been proven to be accurate.

British Columbia's forest land is among our most valuable public assets with an estimated value, including all natural capital and ecosystem services, of a trillion dollars. The present mismanagement of our public forest lands has enormous economic and ecological consequences.

A call to the minister of forests

British Columbians cannot afford to continue down this path. The costs to our economy and environment are just too great.

But it is not too late. We can use the information provided by experts like Anthony Britneff and Marvin Eng to establish a starting point for improvement. Understanding the gravity of the situation can spur us to action.

I call on the minister of forests to return to the traditional values of our Forest Service and to restore to the statutory responsibilities of the Chief Forester the requirements to conduct and maintain periodic forest inventories, and to reforest and restore forest lands disturbed by fire, wind, disease and insects.

Our forests are of critical importance to British Columbia's economic and environmental health. Only through decisive action today will we ensure prosperity for the future.