On July 1, 2009, France reduced its value added tax (VAT -- the equivalent of our GST or HST) on restaurant meals from 18.5 per cent to 5.5 per cent. They did that because they accepted the evidence that the tax on restaurant meals kills jobs; they expect 40,000 jobs to be created as a result of cutting the tax. 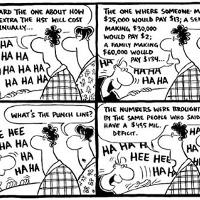 Zalm Hates the HST, Too

Why does Premier Campbell think that economics work differently in British Columbia?

If you can answer that question you might also know why he would say one thing before an election and do the opposite after the election.

Finance Minister Colin Hansen was almost laughed out of the room when he told reporters that money from the HST would be earmarked for health care. On March 6th, Vancouver Sun columnist Vaughn Palmer wrote: "By the end of this week, even Hansen was admitting that the move to link the HST to health care was mainly an exercise in public relations."

Not to be deterred by its failed public relations exercise, Monday the Campbell government released a propaganda sheet that it tried to spin as an economic study. The 13-page paper by Jack Mintz of the University of Calgary's school of public policy claims that over 10 years, the HST "is expected to increase the province's capital stock by more than $14.4 billion and add 141,000 new jobs." The words "is expected to" are significant because Mintz's claims are nothing but wishful thinking, not backed up by any testable hypotheses -- no model, no estimation techniques, no standard errors of the estimates.

Mintz argued that: "When maximizing the value of their shareholders' equity, businesses will invest in capital until the marginal return on it is equal to its cost." As the recent financial mess around the world demonstrated, it is arguable whether large corporations maximize shareholders' equity, but that is not the biggest hole in the Mintz paper. He maintained that by lowering the marginal effective tax rate (METR) on capital, more projects will be attractive for business investments. Despite a few footnotes about assumed capital-labour substitution and the risk of changing federal policy, there is nothing in his paper that spells out how he arrived at estimates of precisely $14.4 billion in investment over 10 years and 141,000 new jobs.

Mintz failed to put his unsubstantiated estimates in the context of B.C.'s traditional investment and job growth so readers could tell whether his numbers are significant and thereby judge whether they justify shifting $2 billion a year from businesses to consumers. Note that in the absence of inflation that would be a shift of $20 billion over 10 years to justify investment of $14.4 billion; if Mintz is right, consumers could do the investment themselves and be almost $6 billion ahead.

Back to the context for comparison: at 2 per cent annual employment growth, B.C. will add more than 390,000 in the next 10 years. Mintz is claiming that the HST will boost that by 36 per cent. That strains credibility when we know that jobs will be lost in the hospitality sector because of the tax. As for investment, over the 10-year period ending in 2008, businesses invested $97 billion in machinery and equipment in B.C. and $82 billion in non-residential structures, so Mintz is claiming that if the next 10 years are the same, business investment would increase by 8 per cent. For those who are here 10 years from now, it might be challenging to separate the effect of lowering the METR from the effects of changing interest rates and commodity prices.

Before committing to the HST, B.C. had the opportunity to study the consequences of eliminating the provincial sales tax on production machinery and equipment. Instead of commissioning Mintz to produce his paper, the Campbell government might have attempted to analyze its own tax experiment. The Campbell government eliminated the PST on "production machinery and equipment" in 2001.

I submitted a freedom of information request asking how much tax revenue was foregone for each year since that exemption and for any documents that discuss estimates of changes in investment as a result of the exemption.

On Oct. 30, 2009, I received an answer saying: "Pleased be advised that the Ministry has no records responsive to your request. Budget 2001 estimated the cost of the exemption when first introduced but the cost has not been estimated since because it is not part of the Tax Expenditure Survey."

Before embarking on one of the largest tax shifts in B.C. history, one might think that the government would have analyzed whether its initial experiment in stimulating investment worked or not, instead they hired Mintz to write a propaganda sheet.

It is probably true that lower taxes on investment means more investment, just as it is true that higher prices on restaurant meals means fewer meals. The trick is in determining how much. There appears to be good evidence that restaurant meals purchased decline by 1 per cent for every 1 per cent increase in price. There appears to be little or no evidence on how business investment responds to changes in taxation, but most economists would acknowledge that interest rates and commodity prices are likely to be far more important than marginal tax changes.

There doesn't appear to be any provincial public opinion polling in the works that will allow us to measure whether the Liberals enjoyed a post-Olympic bounce or whether the public is buying their political spins. It may be the fall before the spin is tested, after folks see what the HST does to the price of lunch and a cup of coffee.