Finance Minister Colin Hansen faces a credibility problem when he presents his budget on Tuesday, September 1st. His government is already in free fall in the opinion polls as a result of last month's surprise announcement on the HST. He has to amend balanced budget legislation a second time, confessing that there will be more than two years of deficits. 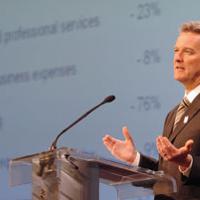 Budget watchers are likely to take any forecasts offered by Hansen with a grain of salt as they watch for details on cuts. Who has the most reason to be skeptical?

Start with many arts organizations, who began getting letters last week informing them that they won't be receiving gaming grants; that comes despite an expansion of BC Lottery Corporation's Internet gambling.

Hundreds of community organizations fear that the government will wreak havoc on their financial security.

Big cuts to services directly provided by government probably won't be specified in the budget. It will be necessary to compare the estimates book tabled last February with the update tabled Tuesday to find general areas with cuts, and then wait for leaks that identify the specific program areas that are getting hammered.

Health and education will be especially tricky because government will point to absolute dollar increases without considering whether those increases are adequate to cover higher costs it imposed on health authorities and school boards through contract negotiations.

If Hansen can be believed, we will all learn to love and appreciate the HST once he releases the charts and graphs that will be part of his budget presentation. In particular, Hansen promised to "set out some numbers... which will actually demonstrate that the impact on typical seniors in British Columbia will in fact be a net benefit... " Hansen may be correct, but only because many seniors in British Columbia live in dire straits.

Median family income is the level at which half of all families have lower income and half have higher income. For all families, all ages and all types, median family income in B.C. in 2006 was $62,600; for families with the oldest member being over age 65, median income was only $21,900. According to the government's HST website, "Low income families and individuals will receive an annual B.C. HST Credit of $230 for individuals with income up to $20,000 and $230 per family member for families with incomes up to $25,000, paid quarterly with the GST credit." So how many people are so poor as to qualify?

The government estimates that "over 1.1 million British Columbians" will receive that benefit, a testimony to the extent of poverty in B.C. -- one in four.

Those figures also indicate that 3.3 million British Columbians will not qualify for the tax credit, in particular, anyone working full time and making over $13 per hour, unless Hansen improves on what has been announced on his HST website.

Misleading to spin the HST

Restaurants and their employees are going to be amongst the hardest hit by the HST. Not only will food service workers suffer as consumers, but some will lose their jobs. In question period Hansen responded to concerns raised by Ian Tostenson, president of the British Columbia Restaurant and Foodservices Association, by saying: "But at the end of the day, people in British Columbia who are unemployed do not have the luxury of being able to go out and enjoy the fine restaurants that he represents."

It is true that British Columbia has many fine restaurants, but it also has hundreds of coffee shops and fast food outlets. Tostenson's organization represents that full range of food services. Hansen's remarks are misleading, and reflect his desperation. With the HST, the $7.00 special at a food court will increase to $7.49. For someone who eats like that every working day, the increased cost over a year is about $125, and that's just the increased cost of lunch, before the worker gets home to look at higher hydro, gas and telephone bills thanks to the HST.

Another misleading statement used by Hansen and other apologists for the HST is that it will help to pay for health and education. The province will receive a one-time payment of $1.6 billion from the federal government "to support the implementation" of the tax. Ontario is using the transition money to assist families. B.C. is taking it into general revenue. It could be called money for anything, but it gets misleading when Hansen goes beyond the one-time payment and suggests that the HST will help fund health and education on an ongoing basis. That is only true in the sense that the PST did the same. If the tax is truly revenue neutral it won't do anything more than what the PST did for health and education.

The PST raised $5 billion. Hansen has said that the HST will too, plus or minus $200 million. Unless they are lying or confused about the HST being a tax grab, the HST has nothing to do with short term revenue requirements; it is a tax shift from business to B.C. families. Hansen tries to make the link to health and education funding on an ongoing basis by arguing that the HST will contribute to economic growth which in turn will bring in more revenues to fund health and education. That's the same tactic he uses when he claims it will help restaurants; they'll take a hit but economic growth will make up for it.

Why HST's benefits are oversold

A problem with Hansen's hope that the economy will be stimulated as a result of the HST lies in the structure of the B.C. economy. Resources continue to play a major role and the prices they sell at are determined by international markets. With lumber, minerals and natural gas selling at prices barely a quarter of pre-downturn peaks, it will take more than an HST input tax rebate before mills open.

The Campbell government used to say that tourism would cushion the blow in resource dependent communities. That is one of the industries which will be hit hard by the HST. It is possible that economic recovery will be delayed as industries that might otherwise pick up some of the slack during especially hard times in the resource sector see their customers turn away due to higher prices and lower incomes.

On August 26th Alberta released its first quarter financial update. B.C.'s isn't due until the end of September, but Hansen may release it early as part of his budget update. Alberta is now forecasting a deficit of $6.9 billion, up from $2.2 billion forecast in its budget. Analysts point out the forecast is based on the price of natural gas increasing substantially and averaging Cdn $3.75 per gigajoule over the fiscal year although many think it could drop below $1. B.C. is not as vulnerable as Alberta to changes in natural gas prices, but even so, government revenues drop $300 million for every $1 drop in the price of natural gas.

When Alberta tabled its $2.2 billion deficit, many said it was further evidence that B.C.'s forecast of a $495 million deficit was unrealistic.

On Tuesday realism will hit home.