An advocacy group for Canadian taxpayers says that a major, multi-nation trade deal reached today is a win for foreign companies, less so for local taxpayers. 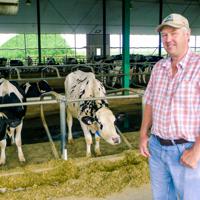 Farmers Could Sour on Tories over TPP Dairy Battle

Dennis Howlett of Canadians for Tax Fairness panned the Trans-Pacific Partnership, negotiated in secret among 12 member states, as a deal that could weaken Canada's economy and deplete tax coffers.

Howlett said two issues are the costs of prescription drugs that provinces will have to pay, along with $4.3 billion in compensation promised to farmers for having to relinquish some of their long-shielded market in Canada.

Under the deal, drug companies will have a monopoly on patents for eight years. This follows current Canadian rules, meaning that drug prices won't go down and the provinces will have to keep shelling out high prices.

Additionally, the deal opens up Canada's supply managed systems. Foreign producers will now be able to export some poultry and dairy products to Canada, including up to 3.25 per cent of the country's annual dairy production, among other concessions, according to the Canadian Press.

Reacting to the concessions, Howlett said he suspects the Conservatives are trying to slowly erode Canada's supply management system so they can completely wipe it out one day. "Farmers would be very misled to think their interests are protected," he said.

The supply management system is intended to prevent the over or under-production of products such as dairy and poultry, and maintain a stable price structure for both industries.

But with small portions of the market now conceded to foreign competition, the costs of goods to consumers could fluctuate more radically, Howlett said.

Announcing the deal this morning, Prime Minister Stephen Harper said the concessions on dairy were modest and that compensation for farmers is more than enough.

According to one calculation by CP24, 3.25 per cent of Canada's annual dairy production in 2012 amounted to 260 million litres of milk.

The Daily Farmers of Canada said that while they are not pleased with the concessions made at farmers' expense, the compensation package takes some of the sting out.

In order to soften the financial hit to farmers, taxpayers will pay a total $4.3 billion in compensation over 15 years to farmers in supply managed sectors, including dairy.

"The compensation package does neutralize some of the impact of what was given up," Smith said.

In July, dairy farmers said up to 25,000 jobs could be at risk across Canada if the industry was hit hard by concessions in the deal.

Smith said that while some jobs could be affected by the change in market access, he couldn't speak to specifics.

"We look forward to moving on and working, knowing we have been compensated [in the deal]," he said.

Howlett also estimated that Canada's auto sector could lose up to one-quarter of its jobs, as more auto products can be imported under the deal.

Over the next five years Canada will phase out its six per cent tariff on foreign cars, meaning imported vehicles will be cheaper as long as they are from TPP countries.

Unifor, the union that represents auto workers in Canada, warned that could put 20,000 auto worker jobs at risk.

The Conservatives made a campaign promise Tuesday morning to support the auto sector through extending funding of the Automotive Innovation Fund, established during this year's budget.*

The promise includes grants for building facilities, and $1 billion over 10 years for the auto sector.

The plan introduced this year earmarked $100 million over five years for the sector.

"The auto sector overtook oil again as the biggest exporter, and to weaken your most important export industry seems a bit shortsighted," he said.

Canada has been on the losing end of many trade deals signed by the Tory government, Howlett said.

He cited the recent deal with South Korea, which has since seen Canada import more and export less from the country.