Jessica Ernst, whose landmark multi-million dollar lawsuit challenges the regulation of hydraulic fracturing, has filed an appeal against a court ruling that granted that Alberta's Energy Regulator blanket "immunity" from civil action. 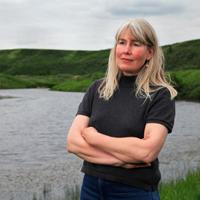 In a lengthy 41-page ruling Alberta Chief Justice Neil Wittmann struck the energy regulator from the lawsuit last September but ruled that the claims against Alberta Environment and Encana Corporation could proceed.

The appeal says that Justice Wittmann erred in finding that the Energy Resources Conservation Act granted the provincial energy regulator immunity from either "negligent omissions" or from acts undermining Canada's Charter of Rights and Freedoms such as breaches of freedom of expression.

"The Alberta Court of Queen's Bench has ruled that in this case, the energy regulator is virtually untouchable -- that the ERCB cannot be sued for violating the constitutional free speech rights of a private citizen, and in fact, cannot be sued no matter how badly the regulator behaves," said Murray Klippenstein, lawyer for Ms. Ernst.

"Ms. Ernst thinks this is wrong. She believes that Albertans deserve much better from their energy regulator. This is why Ms. Ernst is appealing."

The lawsuit alleges that Encana, a pioneer of hydraulic fracturing, drilled and fractured shallow coal bed methane wells directly in the local groundwater supply between 2001 and 2004 near Rosebud, Alberta, polluting Ernst's water well with enough toxic chemicals and methane to make it flammable.

The suit also alleges that two provincial regulators, (the Energy Resources Conservation Board (ERCB) and Alberta Environment), not only failed to act on documented and repeated violations of the law but ceased all communication with the seasoned oil patch consultant on the grounds that she posed "criminal threats."

Members of Alberta Environment dismissed some methane contamination of water wells as "natural" and allegedly accused Ernst of forging signatures and a professional seal, as well as falsifying data in a private hydrological report that found evidence of Encana fracking into a local aquifer in Rosebud, Alberta.

'No faith in Alberta justice': Ernst

The 56-year-old scientist, whose lawsuit has made her a folk hero in the Maritimes, the United States, the Republic of Ireland and the United Kingdom, has worked for scores of energy companies as either a land agent or as an environmental consultant.

Major clients of her incorporated environmental business included Encana as well as the North American Oil Sands Corporation which was eventually bought by Statoil.

"I have now seen what justice is in Alberta and I have no faith in it," Ernst told The Tyee. "But I see that as no reason to give up and no reason not to file an appeal. The breach of my Charter Rights is important to all Canadians and this fracking industry wants to take away all of our rights and so does the Harper government."

"When you are at war -- you don't throw down your shield and sword and run. You have to defend our constitutional rights. I think we are going to win. It's just so important."

Ernst is not the only landowner to have been "banished" from communicating with the regulator.

After Carmen Langer, a rancher in Peace River, persistently complained about air pollution from venting bitumen batteries and storage tanks, the regulator banned him from communicating directly with staff.

"They said I was a threat and that I wasn't a nice guy. I said how would you feel if you had your fucking head in a bitumen tank for a while. You have to stand up to bullies to defend your rights in this province."

His complaints forced an ongoing public investigation into "odours and emissions" from bitumen operations that sickened cattle and forced six families to abandon their homes.

'No duty of care'

During initial hearings on the Ernst case lawyers representing what is now the Alberta Energy Regulator argued that the nation's most powerful regulatory body had "no duty of care" to groundwater, a public resource, or to landowners dependent upon that resource.

Meanwhile the Alberta government, which receives 30 per cent of its revenue from the exploitation of hydrocarbons, has abruptly applied to Judge Wittmann, a Harper appointee, to be dismissed from the claim five years after the fact.

"They are trying to waste my time and money and make me quit," says Ernst. "Let's get on with this trial and find out what chemicals Encana injected into our water in Rosebud and let's stop this circus."

Encana, which has suffered financial losses due to bad investments in shale gas, never asked for any part of the claim to be struck. The company's statement of defence was filed last August but only after receiving an order from Judge Wittmann.

Its statement argues that the company did not frack any coal-bed methane wells but merely "stimulated" them.

Hydraulic fracturing, the high pressurized detonation of hydrocarbon-bearing formations with gases or water and chemicals, has driven a boom in unconventional shale oil and gas over the last decade.

The so-called "revolution" has produced large amounts of previously untapped natural gas while it has industrialized rural communities, contaminated groundwater, aggravated methane leaks at well sites, polluted the air with toxic flaring and venting and even caused earthquakes. The boom caught regulators unprepared and has generated major legal challenges across North America.

"By any responsible account," Chief Justice Ronald Castille wrote, "the exploitation of the Marcellus Shale Formation will produce a detrimental effect on the environment, on the people, their children and the future generations, and potentially on the public purse, perhaps rivaling the environmental effects of coal extraction." 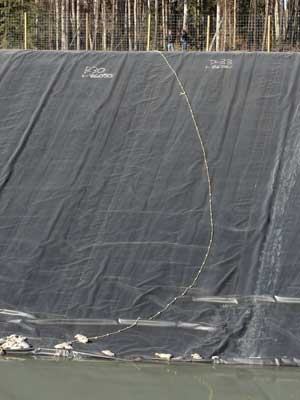 Talisman's 12 metre-deep "Pond A" in 2010. B.C.'s Oil and Gas Commission is investigating a possible leak of toxic frackwater. Photo by Will Koop

An 11-page statement of claim by plaintiff Diana Daunheimer states that "Any reasonable person in our situation would have been damaged by Angle Energy's breach in duty. Angle Energy continues to breach this duty by causing and continuing to allow hazardous chemicals to remain in the ground surrounding and beneath the plaintiff's property and in the Daunheimer residence water supply and allow the continual emissions from venting and instrument operations."

The allegations have yet to be tested in court.

In the last four years, multi-stage hydraulic fracking of horizontal wells for oil has exploded in the province. About 77 per cent of all new oil wells drilled in Alberta (2,379 wells out of 3107) in 2010 were fracked.

In addition there have been more than 25 cases of companies "communicating" with other company well sites with high pressured blasts of water, sand and frack fluids in northern B.C.