Robert Fisk filled the pews at Saint Andrew's Wesleyan on the night of Feb. 2. His audience didn't get fire and brimstone, exactly -- but it was a prophet's sermon with more than a whiff of cordite. 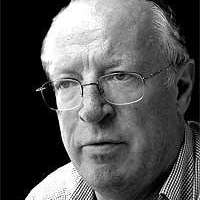 Fisk, the brilliant and maverick, Arabic-fluent reporter on Middle East conflicts whose brilliant books include Pity The Nation: Lebanon At War and The Great War for Civilization: The Conquest of The Middle East, offered his 1,000 listeners a swift tour of recent events in the Middle East and Africa, full of with personal anecdotes and topical digs at Canada's involvement in Mali. But his comments on the media hit even closer to home.

Mali, he said, has been fighting a race-based civil war for 30 years because the Tuareg and Arabs of the north refuse to be governed by the blacks of the south. Al Qaida is a latecomer, having arrived in Mali only a year or so ago.

And it's a new Al Qaida that's forgotten Osama Bin Laden as a "has-been": The new AQ doesn't want to establish a worldwide caliphate, but simply hopes to humiliate the West by provoking it into unwinnable conflicts, over and over.

"The West never got over World War II," Fisk said, and every conflict since then has been sold as a fight against some new Hitler or Mussolini. He predicted we would soon hear similar arguments about the war in Mali.

As for the Arab Awakening, Fisk argued that it began long before Tunisia -- in Lebanon in 2005, when the assassination of Rafic Hariri brought vast crowds into the streets of Beirut demanding (and getting) the withdrawal of Syrian troops.

A similar protest in Tehran in 2009 failed, but it was not a protest against the Iranian revolution -- only against the corruption of the current government. Those two revolts foreshadowed the present, Fisk said, when some uprisings have succeeded and others have horribly failed.

Technology has been important for the insurgencies, especially the mobile phone. But improved education and increasing travel have been equally critical. Fisk cited the vastly better Egyptian post-secondary system compared to that of the 1970s, and the fact that more Egyptians, by getting out of their own country, have seen how others live.

Egypt also saw a critical role played by trade unions. He described earlier protests in Tahrir Square in 2006 and 2007 by cotton workers; they won some improved working conditions, and were the first to join the protesters in 2011. "I missed this story," Fisk confessed, and noted that protest-related deaths are fewer in countries with strong unions, like Egypt, than in countries without them, like Syria.

He said the protesters weren't calling for democracy, but for dignity and justice. Dictatorships infantilize their people, he argued, and said Mubarak gave the game away in his last speech when he addressed Egyptians as "My children, my children." He sealed his own fate with that ill-chosen phrase.

And why not democracy? Because the western democracies are precisely the countries that have imposed their will, and installed dictators, in the Arab lands since the end of World War I. The West, he said, thinks it has a right and a duty to do so.

"But these are not our people," Fisk said; they have a different history and culture from the West, and we have no business intervening.

At the heart of the East-West conflict, he said, is the fact that "We've lost our faith; they haven't lost theirs." And the Muslim world is still struggling with the question of how a people who have kept their faith could have been crushed by a people who've lost their faith.

Fisk's view of current events was bleak. Syria is a "holocaust," comparable to those of the Jews and Armenians. "Both sides still think they can win," he said. "The war will go on and get worse."

He laughed at reports that the Israelis had recently attacked a convoy carrying arms to Hezbullah in Lebanon: When Assad is fighting for his life, he is unlikely to be getting rid of weapons. Fisk thought it more likely that the Israelis attacked a military research base, as the Syrians said.

Nor did he foresee a Palestinian state ever existing, "when the West Bank has been taken over." A one-state solution is equally impossible, because it would have an Arab majority.

As impressive as his survey was, Fisk's most important observations were not about the issues in the region but about how they are presented to people in the West. As a young reporter, he said, he'd been trained in "50-50 journalism," with half of each story devoted to one of two sides -- whether a football match or a dispute over a new highway.

On the side of those who suffer

"The Middle East is not a football match; it's a bloody tragedy," he said. For journalists to cover it, "we must be neutral and unbiased on the side of those who suffer." He cited, as he often does, the definition given him by Israeli journalist Amira Hass: "What journalism is really about is to monitor power and the centres of power."

"So our job is to be a moral compass," he said. "Instead, we de-semanticize the conflict... We create a verbal version of virtual reality."

He cited a number of terms that can stand with the best of George Orwell's Newspeak: The wall separating Israeli and Palestinian communities, he said, is longer and bigger than the Berlin wall ever was, but it's usually called a "fence" or a "security barrier."

The West Bank, conquered in the 1967 Six-Day War and illegally occupied ever since, is now "disputed territory," as if the dispute could be settled by lawyers in an afternoon. The Jewish "settlements" are actually colonies, limited to Jews only, and now they're being called "neighbourhoods" and even "housing starts."

Fisk also jeered at other clichés: "The 'peace process' never existed, but then it had to be put 'back on track' like a derailed train." Now, he pointed out, Tony Blair has proposed a "road map" for that train.

"Why let us get away with clichés?" he asked.

He asked the audience how many of them read the "crazed, impossible, ludicrous narrative of the National Post." Hands went up. "Why?"

Asked if they read The Globe and Mail, more raised their hands, and again he asked, "Why?"

Fisk then read a recent Reuters report in The Globe and Mail, in which the only named source was the spokesperson for Foreign Minister John Baird; all other sources were "government officials" or "senior intelligence officials" or "a senior Algerian official."

Fisk finds language weaknesses on all sides. He often criticizes sloppy journalism and clichés, and he also suggests that a growing gap between literary and spoken Arabic has put the Arab nations at a disadvantage since the days when Islam was the source of high culture and scientific progress. Similarly, he attacks crimes on all sides, whether Israelis or Arabs, Christians or Muslims or Jews, are the perpetrators.

So his position is really that of that earlier prophet George Orwell, whose "Politics and the English Language" is more often invoked than obeyed by modern journalists and pundits. "In our time," Orwell wrote in 1946, "political speech and writing are largely the defense of the indefensible." Nothing has changed. Never mind speaking truth to power, which in any case is deaf; Orwell and Fisk speak truth about power, and let us draw our own conclusions.

Fisk made a point of his avoidance of the Internet, except to email his stories to his editor. He prefers "a paper that you buy and open up and read." So he doesn't blog, doesn't tweet, and sees comments on his stories only when someone prints them out and mails them to him.

But his audience (many of them listening while glued to their smartphones) would have been small or nonexistent without their online access to his Independent stories. Canada's mainstream media rarely pick him up, and conservatives demonized him for his reports on the buildup to the Iraq war. "Fisking" is still a popular term among right-wing bloggers for supposedly demolishing a left-wing argument.

So the Internet has enabled him to find a worldwide audience. If it is just one online tribe among many, the size of the Saturday audience made it look like a big one.

The online hostility aimed at him is only a tribute to his real-world impact: One journalist who knows his beat and knows his facts, who refuses to defend the indefensible.