Dora Ng just wanted to dance like a lion.

So Ng, 31, asked a friend from a famous lion dance team if they could join. (Ng, a non-binary Chinese-Canadian, uses they/them pronouns.)

But a week later he came back with bad news.

“Sorry, my teacher said that girls aren’t allowed to be lions because they menstruate and are therefore unclean,” he said.

“That was 10 years ago, and at the time I kind of accepted it,” Ng recalls. “But I’m pretty convinced somebody just made that up.”

When Ng began practicing lion dancing, women and gender non-binary people were a rarity in the practice. For decades, women were prevented from learning and performing Chinese lion dance.

“Trying to break through was a really frustrating and difficult process,” Ng says.

Over the years, Ng has heard countless different explanations for why women couldn’t be trained in traditional Chinese lion dance, from the notion that women couldn’t hold up the head of the lion costume (which can weigh from seven to 18 kilograms) to claims they couldn’t perform the strenuous routines, which involve jumping onto raised platforms and crouching for long periods of time.

So Ng, who’s practiced kung fu since age 13, decided to teach lion dance to anyone who wanted to learn.

The real reason women and gender non-binary people have been excluded may have more to do with the history of the form. Although the exact origins of lion dancing in China are unknown, many scholars believe it likely started after lions were brought into China by Buddhist followers and merchants, as a result of trade along the Silk Road.

In the early part of the 20th century, lion dancers were often associated with “secret societies” and covert organized crime groups, says Josephine Chiu-Duke, professor of Chinese history at the University of British Columbia.

“It has little to do with gender, but rather with social status,” Chiu-Duke explains. “Lion dance performers could very well have been women, but their status in society wouldn’t be high… Even after the lion dance become popular, it is perhaps due to convention that we in general see no female lion dance performers.”

But today, around the world, more lion dance clubs are opening their doors to women.

An all-female lion dance club in Boston, Gund Kwok, has added to the growing number of women lion dancers competing in Singapore and across Eastern Asia.

Eugenia Chau, 37, founder of the Vancouver Chinese Lion Dance Association, said although she didn’t have any trouble finding willing teachers, “I do know some clubs don’t teach women.”

From its start in 2006, Chau’s club has always been open to people of all gender identities.

“For me, it’s more to promote the art of Chinese lion dance, rather than have it be exclusive, you have to be Asian, or you have to be male in order to learn. Our club is all diversity... as long as they want to learn the culture, we welcome them, and we teach them.”

Chau said that gender inclusion in Chinese lion dance often comes down to the attitudes of a particular instructor or club.

The Hon Hsing Athletic Club, the home of the oldest and historically largest lion dance club in Vancouver, remains a fraternity.

Founded in 1939 by the Wong Wun Sun Society and the Wong Kung Har Tong Society (which would later become Wong’s Benevolent Association), the Hon Hsing Athletic Club originated as a response to the Second World War.

While, the club’s men-only policy may have been initially prompted by exclusionary immigration policies and the high head taxes imposed on Chinese immigrants, which created a community of bachelors in Vancouver, its continuation as a fraternity has an impact on women hoping to find acceptance within the community.

“It’s not just that people don’t think you can do it. It’s literally no girls allowed,” Ng says.

But with recent cultural and demographic shifts, women are entering the lion dance community in greater numbers.

“I don’t know if it’s just in Vancouver, but it feels like the heyday of lion dancing is over and [clubs] are so desperate for anyone, they’re taking women,” Ng says.

Chau’s own club currently has more women than men, and she suggests women’s interest in learning the art form is another possible reason for their growing inclusion within the community.

Ng is deeply appreciative of their artistic relationship with Ma, a 48-year-old Chinese-Canadian woman who had also struggled to learn lion dance despite decades of dedicated kung fu training and teaching.

“I’ve developed such a strong relationship with Vicky,” Ng says. “We have a very similar mindset and we’re able to participate in a lot of community things and just bring joy.”

The pair have performed at the Chinese New Year event in Vancouver for the past five years. With demand for trained lion dancers at community events continuing to grow, gender is becoming irrelevant. As Ng says, “any warm body” would do.

But accessing ongoing training is still a challenge. When Ng and Ma met a drummer named Steven Wong, he was blunt. “You two are fit, but you have no idea what you’re doing.”

Wong offered to teach them and invited the pair to join his early morning tai chi class at a local park. While they occasionally practiced tai chi with a group of Chinese seniors, the main event was lessons in the art of lion dance.

Wong schooled them on the basics, using an empty ice cream bucket as a drum. “He’s such a great drummer, that’s his passion. He just needs a lion to make his art come alive,” Ng says.

As a gender non-binary person, Ng is motivated to help break through gender barriers because they have experienced them in a deeply personal way. They say changing their appearance to reflect a more traditionally masculine presentation highlighted the way perceptions about gender and ability led to obstacles. 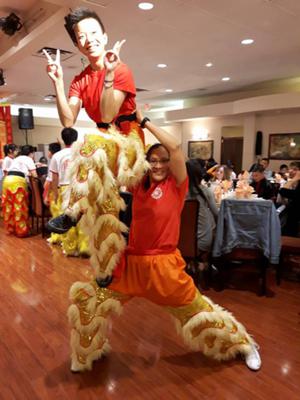 Ng and Ma have built a great friendship through lion dance, and enjoy bringing some "goofiness" to their performances.

“When I started changing my presentation, people just saw my potential,” Ng recalls. “Noticing that made me more committed to dismantling what used to be barriers for me in the first place.”

Ng’s dedication to the art form is also influencing choices in their personal life. As a non-binary person who also identifies as transmasculine, they have considered hormone therapy.

“Testosterone might be something in my future,” Ng muses. “But not until I’ve won a lion dance competition without it, so people can’t say it’s because of the testosterone.”

While breaking down barriers is important to Ng, their lion dance journey is about more than just gender. One of Ng’s main goals is to help build community in Vancouver.

“One of the greatest things about martial arts is it’s very intergenerational,” Ng says. “I would like to be able to create that kind of space and open it more. Open it to be not just age inclusive but also to be truly gender inclusive, and body inclusive, bring everybody together.”

“When you’re 90 and you have a community of people around you, you still practice tai chi in the park, and you go for dim sum after, and you’re happy and laughing and surrounded by friends and community. I think that’s winning.”