At the first COVID-19 news conference in almost a month, and quite possibly the last one ever, chief medical officer of health Dr. Deena Hinshaw let Albertans know yesterday that they and their still-unvaccinated children will basically be on their own when it comes to the virus’s rapidly spreading Delta variant.

With Delta-dominated post-Calgary-Stampede COVID-19 rates surging and more than 1.5 million Albertans including all children under 12 still unvaccinated, Dr. Hinshaw announced that in less than three weeks Albertans who test positive for COVID-19 will no longer be required to go into isolation, or seemingly do anything else.

At that point, Alberta will probably be the only jurisdiction in the world where such a state of affairs exists, at least officially. So if COVID-infected Albertans want to go to a bar, hang out in restaurants, sing in church, or attend musical concerts, there’s nothing to stop them. They can fill their boots!

Unsurprisingly, Stampede officials and UCP supporters dismiss the connection between the annual rodeo and the increase in COVID-19 cases. The government’s news release yesterday rather tendentiously framed the changes as an effort “to support Albertans.”

Starting today, anyone who is known to have come in contact with anyone infected with COVID-19 will no longer be notified, although Dr. Hinshaw said it would sure be nice if the person who did the infecting bothered to let them know.

Henceforth, she added, COVID-19 will be handled “like other respiratory viruses.” Influenza, the common cold, whatever. Isolation supports and quarantine hotels will disappear. COVID-19 testing will be dumped on doctors’ offices, which is sure to be unpopular with physicians and their patients. Asymptomatic testing? Forget about it.

“Vaccines are able to drastically reduce the risk of not only contracting the virus, but more importantly, getting severely ill,” Dr. Hinshaw told the news conference, which was not graced by the presence of Premier Jason Kenney or Health Minister Tyler Shandro.

“From a public health standpoint, this has changed how we need to look at the virus,” she added, claiming the changes will help the province deal more effectively with other communicable diseases.

Calgary physician Joe Vipond, a frequent critic of the government’s half-hearted approach to the pandemic who has been proven right more often than government spokespeople throughout the pandemic, responded sharply on Twitter.

“We are launching an experiment on a population level, first in the world to basically stop acting on COVID,” Dr. Vipond tweeted. “This is an effort to hide the #s, and achieve herd immunity, that will profoundly hurt us.”

“I can predict other countries putting Albertans on the no entry list soon,” said University of Alberta law professor Ubaka Ogbogu, another prominent critic of the government who once served on the Health Quality Council of Alberta. He quit in 2020 to protest government health-care policies.

“We have presently the stupidest public health response to the pandemic in the G7,” he stated. 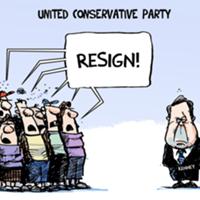 Meanwhile, British Columbia moved in the opposite direction and reimposed mask mandates in the province’s Okanagan Valley.

More than half of the province’s daily and active COVID-19 cases are concentrated in the region, B.C. provincial health officer Dr. Bonnie Henry told a teleconference yesterday. The Okanagan is a popular destination for travellers from Alberta.

Ogbogu’s fears are likely justified and calls are bound to be heard in other Canadian jurisdictions for restrictions on visits by people from Alberta.

Spector, a former chief of staff to Conservative prime minister Brian Mulroney, deputy minister to conservative B.C. premier Bill Bennett, and Canadian ambassador to Israel, might have been joking. But I doubt it.

Albertans can expect more of the same, quite possibly expressed less temperately.