Vancouver Mayor Kennedy Stewart this week launched a new housing proposal with much fanfare. His presentation suggests that affordable housing for the middle class is the goal — and who can argue with that?

Unfortunately, Stewart’s approach may be just the sheep’s clothing hiding the wolf — the wolf being more millions for land speculators. Here is why I am nervous.

I and others have been calling for a carefully calibrated bylaw to allow for new life for older neighbourhoods. The city council of Portland, Ore. recently provided a useful model by changing zoning ordinance to allow density increases on single-house lots for up to six units if three of the units are affordable.

On the surface, Stewart’s proposal resembles the Portland model. And it does in key ways. It allows for four units to be built on a single lot as long as one unit is priced affordably for a family making $80,000 a year, and up to six units if at least two are priced affordably. However the remaining units under this proposal by definition will not be affordable to ordinary wage earners.*

Why did the mayor choose such a modest target, given that the gap between wages and housing costs in Vancouver is far larger than in Portland? This means that with land values so much higher here, we could reasonably expect more, not less, than what Portland expects.

You see, in Vancouver the real estate industry looks at housing cost from what might seem an odd perspective. They price units by the cost of land per square foot “buildable.” That means how many square feet of space you are allowed to build on a land parcel.

So as you increase the allowable number of square feet you can build on that lot, you increase the price per square foot of dirt. If you double the “buildable” square feet of a parcel with a value of $2 million, its value jumps to close to $4 million overnight. And when that new housing is built, it has to sell at a price that pays off that steep rise in value — about $600 more per square foot.

When you add in the cost of new construction at $250 per square foot and the $250 per square foot for permitting fees and profits, you can’t sell that square foot for less than $1,100. That is approximately what the current market rate for new housing is in this crazy city. Thus, a very small, 700-square-foot two-bedroom strata has to sell for almost $800,000. Monthly payments at three per cent over 20 years would be $4,500 a month.

So the mayor’s claim that this housing is mostly for the middle class is a real stretch. In fact, the great majority of units under this model would only be affordable to the top 10 per cent of city wage earners.

What can be done? Well, let’s look again at the Portland model. There they figured out early that you have to do something to limit land-price inflation.

How? By insisting that a large share of the new units are affordable, you keep land prices from exploding.

The target Portland chose: 50 per cent of six approved units must be permanently affordable.

Let’s see how a target of 50-per-cent affordable units works in Vancouver. By requiring a larger percentage of units be affordable, the price of land can’t inflate, because by limiting the final price of the units you also drop the top purchase price that can be paid for the land, and thus the price per buildable square foot.

For example, let’s say three market units are sold at the market rate of $1,100 per square foot, and the other three are sold, maybe to a non-profit housing corporation, at an affordable $400 per square foot. That means the average sale price per square foot is $750.

After you deduct the $250 for construction and $250 for permits and profits per square foot (as mentioned above), that leaves you $250 per square foot “left over” to pay for the land portion of the overall cost. This is called the “residual” amount available for the “buildable” square foot of approved density.

It just so happens that this is the current market value for a typical Vancouver parcel. Your project has not inflated land prices.

The point here is that this program needs careful analysis to hit the sweet spot that both stimulates the construction of the maximum number of affordable units without further adding gasoline to the raging dumpster fire of Vancouver land-price inflation.

Finally, let’s return to the affordable Vancouver example detailed above to see who gets to live there. The unit is sold to the non-profit for $280,000. The non-profit is going to need $1,500 a month to amortize the unit. How much would a renter or buyer have to earn annually to pay that amount per month and have it be less than 30 per cent of their gross income? The answer is an income of $60,000 per year — below the median income. Success! 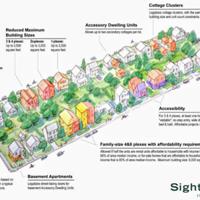 Portland Just Showed Vancouver How to Fix Its Housing Crisis

I must apologize for all this math, but it’s important to prove that the mayor’s notion may best serve land speculators and do very little to increase affordability.*

Writing in these pages late in August, I stated: “Vancouver would be wise to adapt the Portland approach to reflect our realities. The gap between income and land prices in Vancouver is almost double what it is in Portland. This makes it more crucial to require social benefits more universally. But the demand for real estate here also makes it possible to require more social benefits from redevelopment.”

This is still true. It is crucial to calibrate the target for social benefit carefully. We want to gain the maximum number of affordable units possible while not inflating already insanely high land prices.

*Updated on Sept. 17 at 12:44 p.m. to correct an original misunderstanding about the proposed new policy. In fact, a four-plex would not be able to be built without including at least one lower-priced affordable unit.