The Trans Pacific Partnership (TPP), a proposed trade agreement that encompasses nearly 40 per cent of world GDP, heads to Hawaii later this month for ministerial-level negotiations. According to media reports, this may be the final round of talks, with countries expected to address the remaining contentious issues with their "best offers" in the hope that an agreement can be reached. Canadian coverage of the TPP has centred primarily on U.S. demands for changes to longstanding agricultural market safeguards. 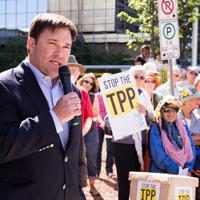 With a national election a few months away, the prospect of overhauling some of Canada's biggest business sectors has politicians from all parties waffling on the agreement. Canadian International Trade Minister Ed Fast, who will lead the Canadian delegation, maintains that the government has not agreed to dismantle supply management protections and that it will only enter into an agreement if the deal is in the best interests of the country. The opposition parties are similarly hesitant to stake out positions on key issues, noting that they cannot judge the TPP until it is concluded and publicly released.

While the agricultural issues may dominate debate, it is only one unresolved issue of many. Indeed, the concerns associated with the agreement go far beyond the supply of products such as milk and chickens.

First, a recently leaked version of the intellectual property chapter revealed that Canada would have to make significant changes to its copyright and patent rules. The TPP requires Canada to extend the term of copyright to life of the author plus an additional 70 years. The law is currently set at life of the author plus 50 years, which meets the international standard found in the Berne Convention.

The extension in the term of copyright, which has generated fear in other TPP countries such as Japan, New Zealand, and Malaysia, would mean that no new works would enter the public domain in Canada for decades. The result would be higher costs for both consumers and educational institutions, with most of the additional royalties flowing out of the country.

The deal reportedly also penalizes Canada for its "notice-and-notice" system for claims of infringement on the Internet. The system has been in effect since the start of the year and has been credited with significantly reducing Canadian piracy rates. The Canadian approach differs from that found in the U.S., however, leading to additional demands that Canada establish enforcement provisions targeting Internet providers and search engines.

The patent provisions in the TPP have sparked concern from health and access to medicines groups around the world. With requirements that would delay entry of generic pharmaceuticals into the market, the TPP threatens to create huge additional health care costs.

In fact, the agreement would also expand the right of pharmaceutical companies to sue governments over national laws, creating the prospect of more lawsuits similar to the $500-million lawsuit launched by pharmaceutical giant Eli Lilly against the Government of Canada.

With the media focus on agriculture, the TPP's implications for privacy have also been largely overlooked. Provinces such as British Columbia and Nova Scotia have enacted privacy safeguards in recent years that are designed to keep Canadian data in Canada. These rules have become particularly important in the aftermath of the Edward Snowden surveillance revelations, since the transmission and hosting of personal information outside the country raises genuine privacy concerns. Yet the TPP views such privacy protections as trade barriers and seeks to establish new limits on the ability of countries to restrict the free flow of information across national borders.

New rules related to copyright, patents, privacy, and investor lawsuits have serious implications for the rights of Canadians as well as for consumer, health care, and education costs. With the TPP in the final stages, Canadians deserve better than canned responses from political parties and a debate limited to the impact of the deal on the agricultural sector.