Perhaps the only thing more offensive than the way Stephen Harper has changed Canada is the fact he's done it without the support of anything approaching a majority of Canadians. 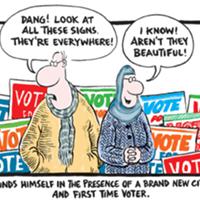 Under our "first-past-the-post" electoral system, it's possible to win control of Parliament and exercise enormous power over the country even with only a minority of voters actually voting for you. The democratic shortcomings of such a system have long been evident.

But the rise of Stephen Harper's Conservatives -- with their aggression, their willingness to flout democratic rules and traditions, their indifference to the interests of those who didn't vote for them -- has highlighted the danger of an over-empowered minority in an urgent new way.

With only 39.5 per cent of the popular vote in the 2011 election (plus an unquantifiable amount of hubris), the Harper government has exercised 100 per cent control over Parliament, using that power to sabotage international efforts on climate change and implement a whole range of other policies at odds with the values of most Canadians.

Even before winning its majority, Harper's Republican-style Conservative party -- well to the right of Canada's traditional Progressive Conservative Party -- managed to win minority governments with less than 40 per cent of the popular vote.

Now, in the heat of an election year, the current dynamic in Ottawa and the intensity of the popular desire across the country to break Harper's hold on power may finally create sufficient political momentum to put in place a more democratic electoral system based on proportional representation (PR).

The most widely-supported version of PR for Canada -- called Mixed Member Proportional (MMP) -- is used in Germany, Scotland and New Zealand, and has the advantage of combining local representation with a seat count in the legislature based on the popular vote. MMP was recommended by the Law Commission of Canada in a 2004 report on Canadian electoral reform. It has the support of nonpartisan groups like Fair Vote Canada and the Canadian Electoral Alliance.

What matters, of course, is what kind of support it has among political parties. And on that front, there are grounds for encouragement.

The strength of this Liberal support is especially impressive, since Liberal leader Justin Trudeau voted against the bill.

Trudeau's lack of support is curious, since he's tried to create a progressive image for himself on other democratic reform issues. It's also curious because he presumably won't want to risk alienating voters whose top priority is getting rid of Harper -- something MMP would certainly achieve were it in place right now.

Indeed, MMP might be the best way to ensure that the next Harper -- another crafty, fairly ruthless politician with a small base of support -- isn't able to dominate Canadian politics so completely in the future.

Carolyn Bennett, a Liberal MP who voted in favour of the NDP motion, says that many Liberals voted against it because it mandated MMP, rather than involving Canadians in finding the best alternative electoral system. At its convention last year, the Liberal party voted to study alternative electoral options after the next election.

But this could needlessly delay action and miss the rare opportunity offered by the coming election.

A minority government is distinctly possible -- and opposition parties undoubtedly would work together to ensure the end of the Harper government.

That could involve some kind of deal between them, a deal which should require the implementation of proportional representation in order to ensure a permanent guarantee of greater democracy.

Certainly, the case for serious electoral reform is strong. Over the past century, Canada has had 16 majority governments -- but only four of them have actually received more than 50 per cent of the popular vote.

Some people argue that "strategic voting" is the solution, but this typically involves voting for a party the voter doesn't actually like.

A PR system, on the other hand, allows voters to vote for the party they prefer while preventing parties from governing from a majority position with only minority support. It actually ends the need for strategic voting.

With fear of Harper still stalking the land, progressives should demand opposition leaders commit themselves to seizing the opportunity in this election to bring proportional representation to Canada.

If the demand from voters is strong enough, Justin Trudeau won't want to be in the spotlight as the leader who failed to seize that opportunity.